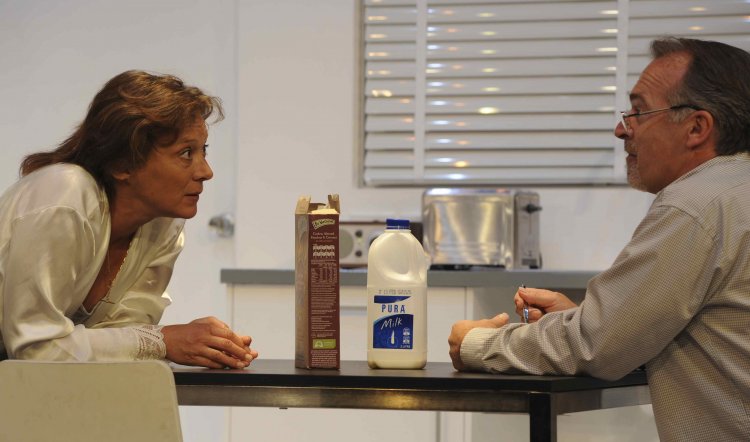 RITA KALNEJAIS is best known to Sydney audiences as a fine actor, but with Babyteeth it's revealed that she's also an astonishingly talented playwright. After treating Melbourne to her initial try-out short plays, this is her second full-length work and the first to be staged in Sydney. Catching up with it at a Wednesday matinee (with real people instead of first-nighters) was an interesting experience in itself a mixed audience (young, not so young, wheelchairs, Zimmers etc). The audience was clearly rapt and at the end gave the actors a standing ovation: a rare occurrence and well deserved.

Babyteeth opens with the death from leukaemia of 14-year-old Milla. The story then rewinds in a perfect circle to disclose how she came to be part of the disparate mob in her family home and neighbourhood. It's a bittersweet comedy, although if you're of an especially tender disposition you may well need tissues by the end. Most of the time, however, you'll be chuckling and thinking, "there but for the grace of Someone-or-Other go I".

Milla (Sarah West) is a typical teenager: sulky and sullen one minute, loveable and preternaturally mature the next; a child whose womanhood is almost within reach (yet, as she knows, will never be fulfilled). Hers is a beautiful, thoughtful performance from yet another fabulous newcomer to the Sydney stage. Her mother Anna (Helen Buday) is also typical of a mother whose only child is dying in front of her eyes while being a typical teenager. Anna is distraught to the point of becoming unhinged, while at the same time desperately clinging to a semblance of normalcy. That she extracts the comedy and pathos as well as the earthy reality of the women is a reminder that Buday has been absent from this city's stages for way too long.

As luck (and the playwright!) would have it, Anna's husband Henry (Greg Stone) is both a successful psychiatrist and shares the same name as a neighbour's dog. The neighbour, Toby, (Kathryn Black) is a wide-eyed and feckless young woman - heavily pregnant but more of a child than Milla has ever been. Is she simple or simply guileless? Meanwhile, she wanders the neighbourhood calling the recalcitrant pooch and, instead, raising an increasingly bemused Henry.

At the railways station on her way home from school Milla is hit on for cash by Moses (Eamon Farren) a shiftless junkie-dealer. As Farren himself looks spookily like Robert Pattinson's more interesting younger brother, it's not really surprising that Milla decides to take him home with her. This move - he's 25 - caused a bit of teeth sucking among a few members of the audience, mainly along the lines of "would her nice, normal middle class parents countenance such a thing?" That is, how realistic an idea is this?

The answer, of course, is that in the normal run of things Anna and Henry wouldn't have a bar of the twitchy, itchy, scratchy Moses, never mind countenancing under-age sex in their own home. But things aren't normal for this family; Milla is dying and Moses, somehow, makes her happy(ish). Unlike her violin teacher Gidon, an ursine Latvian (Russell Dykstra) who is a powerful life force and at odds with the tortured cerebral restraint of her father; and who is now an exhausting and unwanted presence in her life.

After a while it's hard not to go along with the idea that Milla should be free to have sex with whomever she chooses and also to be free of her parents' ambition for her as a violinist: she may be a prodigy but that aspect of her life is irrelevant to her. Grabbing some experience and some passion and pleasure while she can is way more to the point. Feeling alive is what counts.

Kalnejais takes few easy options in spinning this yarn, beginning at the beginning when she grabs everything in both hands and jumps into a potential disaster. The bold (reckless?) placing of death, comedy and the denouement in a single opening scene could, in lesser hands and with a more heavy-handed and less sure director (Eamonn Flack), have plumbed the depths of bathos and misplaced laughter. But no, they pull it off and the production takes flight - aided to some degree by a revolving set (Robert Cousins with lighting design by Niklas Pajanti) that stands for aspects of the family's home and life and Henry's professional rooms.

The actors hop and off, appearing and disappearing, as the roundabout of their lives twirls by; it makes for a fluid and ever-forward momentum which, as the outcome is already known, is all the more unsettling and disturbing for its relentlessness and inevitability. The cast is tremendous. In particular, Helen Buday is heart-ripping and Sarah West is a revelation. Laughter is a continuing surprise throughout and the story is powerful and entertaining.

Babyteeth is kept from outright top rank, however, by a clumsy and ill-wrought final scene in which the authenticity of the piece and the characters is almost undone by some seriously risible miming of piano and violin playing. It seems to be the three-tissue, orchestrally weepy climax of the play but it's so obvious, and at the same time so unlikely, as to be painful to watch. It could be cut without any damage at all - indeed, the reverse.

The set too, is incongruous. While the concept of the revolve works well, as a representation of a middle class milieu it's so wide of the mark as to make you wonder whether it's deliberate. In particular, the kitchen - where much of the action takes place - features cheap, bang-together cabinetry that's only half finished (the sink plumbing is on display throughout). If this aspect and the rotten music miming are supposed to be telling us something about the transience and unexpected disappointments of life - or something deeper - then it's very subtle. Otherwise, it's simply not up to the standard of the rest of the production.

All in all, though, Babyteeth is accomplished, compelling and enjoyable. Let's hope Rita Kalnejais is already dreaming up her next play.