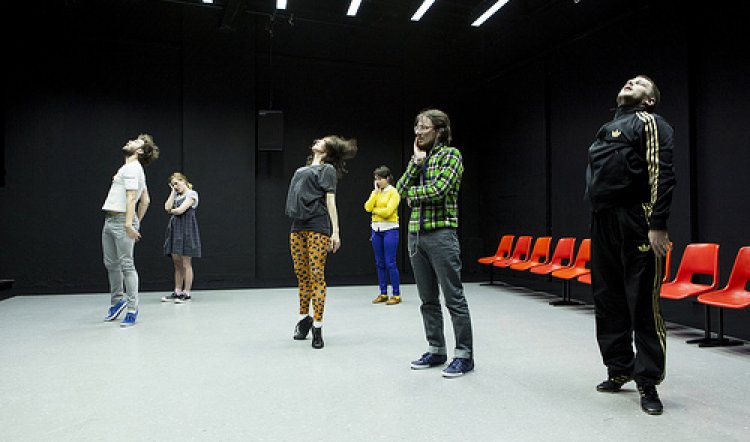 Running at just over an hour, this new dance-theatre work by Lucy Guerin, three dancers, three actors and six iPhones is nothing if not deceptive. It's a mix and match and meld of two of the oldest and newest human preoccupations: storytelling and new toys. It's said in the blurb, and by the guiding creative mind, that the show will be different every night, depending on the nature and direction of the conversation that opens the performance.

The three dancers enter - Alisdair Macindoe, Harriet Ritchie and Rennie McDougall - and, in the centre of a squared off area of Belvoir's not-square stage, observed only by a row of 12 orange plastic chairs, they engage in one of those discussions about nothing and everything that so often happen between friends and colleagues. Each dancer speaks into a pair of iPhones, discretely recording their own words - animated, desultory, meaningful, directionless; more or less articulate and punctuated with "ums" and "ahs" and bursts of laughter and giggles. It's as interesting or not as most overheard snatches of conversation, ranging across the profound and the silly. And in the moment it's impossible to tell the difference.

Enter the three actors - Alison Bell, Matthew Whittet and Megan Holloway - and each is handed one of the iPhones. They plug in earpieces and begin reciting back whichever voice is in their ears. At first it's comical, but very quickly it highlights something we instinctively know but rarely see for real - that a story is instantly different the minute it leaves the mouth and mind of its creator. Even when a phrase is being repeated back verbatim within minutes of its first utterance it is different and can only ever be different. Amazing? Profound? Obvious? Maybe all three, but the effect is electrifying. The audience has been witness to "the truth" - and then hears it back, and it's still the same "truth" but it's so dissimilar as to be virtually another language.

As the piece progresses the fragments of "conversation" - now familiar to the audience - are re-spoken, reconfigured and repeated, in different segments, different order and so on. The iPhones meanwhile are plugged in and unplugged again from connectors that drop from above and are wired in to a sound system. There are pieces of music, slices of sound effects and various apps (percussion, guitar and so on), all tapped and swiped and set in motion by the performers who then respond to whatever happens. 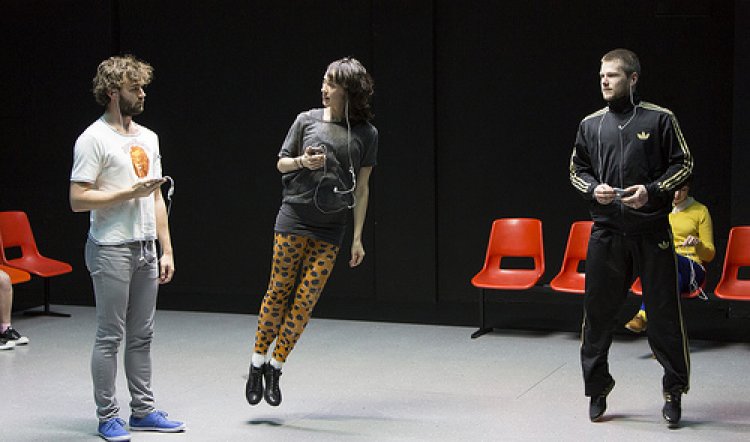 They interact, the dancers dance, the actors sort of dance, they continue with the Chinese Whispers storytelling and offer constant reminders that chaos and anarchy can only only happen within a nice, neat, civilised framework. And then, people being the funny little critters that we are, chaos and anarchy are quickly made over to be comprehensible and bearable and orderly. Some call it improvisation, others call it jazz. And it alternates between nonsensical, intriguing, moving and hilarious.

While thinking about the show this morning-after-the-night-before, I came across a friend's post on Facebook - a quote from John Cage - "I can't understand why people are frightened of new ideas. I'm frightened of the old ones." It seemed apposite: Conversation Piece is about the second oldest human activity told via the imaginative and creative co-option of one of the newest - techno playtime. To put it another way: without imagination and creativity being brought to bear on what we already know, there's no way there will ever be anything new and interesting. Many theatre- and dance-makers (and their audiences) don't get that and nor do they want to; if that thought doesn't scare you then it might be better to stick to Midsomer Murders. Finally it all brought to mind another thought from Cage: "Ideas are one thing, what happens to them is another."

Lucy Guerin and her ace collaborators (including set and costume designer Robert Cousins, lighting designer Damien Cooper and composer and sound designer Robin Fox) had an idea, then they did something with it. What they did makes one realise how rarely that happens. Recommended.