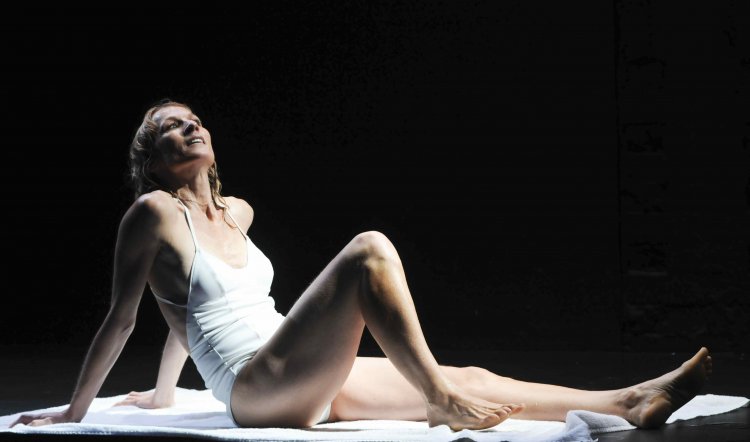 Benedict Andrews is one of the most successful and controversial directors in Sydney theatre today; he has many admirers, while there are others who find his work beyond irritating. He provokes extreme reactions and his productions are at the extremes too: they're either dazzlingly brilliant (if you're a fan) or gruesome failures (if you're not). Which ever it happens to be, his work is always keenly anticipated and never dull. He's also adept, or not, at fiddling with the work of others in adaptation; but until now he's not come up with a play of his own creation. Possibly because, one way or another, he's been a bit busy being our latest enfant terrible.

Both these basic human activities occur and recur throughout with dizzying frequency. They don't appear to have much meaning, outside the mechanical, unless one has read the frontispiece quote from Karl Marx - it's one about the relation of labour to the act of production - when it suddenly make more sense than anything else in the play: if it were not for the wanking one might think invoking Marx were merely wanky.

The play's contrasting pretensions and eye-watering silliness are breathtaking. Internal logic is entirely absent and it's hard to discern anything that might have been put in its place. It opens with a young security guard, Chris, (Shelly Lauman) prowling the perimeter of a swimming pool after a "threat" has put the wind up the otherwise comfortable family whose pool it is. Each of the residents appear, checking out the guard in a way that suggests they really should get out more.

"We sleep much better with you out there," says Leo encouragingly, but then his wife Lydia (Angie Milliken) and 16-year-old twins Olivia (Eloise Mignon) and Oliver (Dylan Young) promptly start hanging out with Chris at all hours, claiming insomnia, loneliness, interest in the night sky and stars, before rapidly getting into Chris's pants; and vice versa.

As is fashionable at the moment, much is made of Greek mythology, but it's only when Chris peers momentarily into the depths of the swimming pool that anything vaguely Narcissistic is evident. As for other references to Echo, Hermes and Aphrodite - give me strength and Aunt Euphemia if it matters a whit.

Aside from inviting Chris to join them for dinner - where the representative of the proletariat gets to try artichokes and caviar for the first time - the 90 minutes of Every Breath are all about Chris sexually servicing the family. And when not jumping Chris's bones, they spend almost as much time on self service. It's amazingly joyless and unsexy - reminiscent of Eyes Wide Shut, Stanley Kubrick's own pathetically unlikely sex fantasy. Then he died, of course, which was the one sure way of remedying his long outgrown enfant terribleness.

Last year, Belvoir's artistic director Ralph Myers said that the first draft of Every Breath was the most exciting first draft he'd ever read. This suggests one of two things: that he hasn't read many first drafts or that there has been a terrible slip twixt first draft and final version. Supposing it's the latter, reading the play - part of the excellent Belvoir/Currency Press deal of incorporating program and script - is no more illuminating. Lines that sound ridiculous and wooden when uttered by these very good actors are ridiculous and wooden on the page. This remains true whether it's a lecture from Leo on the Mobius strip or Lydia's flirting with Chris after a night swim.

Poor Lydia is also stuck with delivering a breathless declaration about nights heavy with the scent of frangipani and jasmine. It's one of those moments when if the concentration were not already wavering, it instantly leaves on a catastrophic walkabout. Frangipani and jasmine aren't in flower at the same time; an upper middle class wife who puts on her table goodies such as artichokes with melted butter, and caviar, would know this. It's a tiny thing but it clanks like a cracked bell. 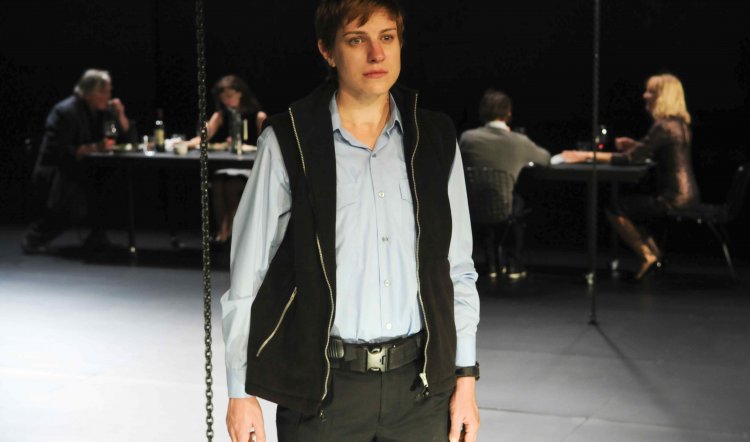 Jeanette Winterton did the same thing in The Powerbook when her heroine enjoyed the sensuous perfume of bougainvillea. As did travel writer Sara Wheeler in Travels In a Thin Country where the first thing she sniffed on de-planing at altitude was apparently that same heady scent. And Julie Burchill similarly tripped when she had her bodice-ripper protagonists in a clinch and he turned out to have three arms. ("He held her tightly to his side with his powerful right arm, with his left hand he gently stroked the hair from her eyes, with his other hand he clasped her chin…" or something like that.)

This is a considerable digression, as you may have noticed, but it's what happened at the point mentioned above during the bewildering stream of strobe-heralded scenettes that do not make a play. Neither does exposing your actors, physically and metaphorically, in ways that are cruel (horrible lines, non-existent characters) and pointlessly confronting (stripping off and simulating various sex acts got tedious decades ago). The actors don't deserve it, they're way too good to be tortured like this.

Angie Milliken hasn't been seen on a Sydney stage for years, having decamped to LA, and to come home for such an awful pile of paper is a terrible pity. She is one of our finest stage actors, not that you'd know it on this evidence, and chances are she'll be on the first plane back across the Pacific as soon as the season is over.

John Howard, on the other hand, is one of our more relaxed, earthed and honest actors, but again, you'd never know it from this stilted and pained appearance. It's excruciating to watch.

Last but not least, Shelly Lauman does her best as the androgynous security guard but is lumbered with such an unlikely role that her efforts are stymied by the palpable disbelief radiating from a considerable part of the audience. Is it supposed to be a shock to the paying public that she's eventually revealed as a female? Otherwise, why does she remove her shirt, boots, socks, pants and finally the (gasp!) constraining bodice that has flattened her breasts for the past 80 minutes?

Everyone needs to be allowed to fail - otherwise how does anything ever go forward, how does anyone ever learn? But what on earth was that first draft like and what happened to it after that? And somewhere along the way Alice Babidge dreamed up a set of such overbearing non-compliance with logic it's amazing the actors aren't crushed by it physically - as seems often likely to happen when the brutalist lid of the brutalist swimming pool is raised and lowered at whim - even as they are in spirit by its implacable black presence.

If there's anything good to say about Every Breath, aside from mentioning that it's just one act and 90 minutes, it doesn't come to mind at the moment. This is a shocker.