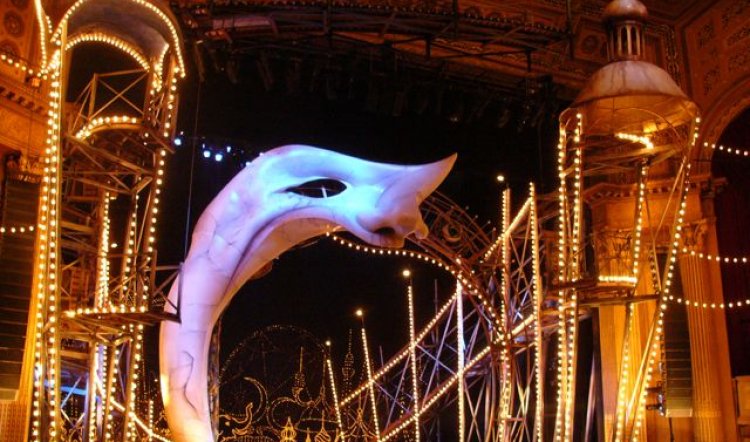 IN THE program notes Andrew Lloyd Webber writes, inter alia, that "Love Never Dies is, I am unashamed to say, the most personal of all my works to date." What does he mean? This is the story of the languishing, anguishing Phantom (Ben Lewis) when, ten years after skedaddling from Christine (Anna O'Byrne) and the nether regions of the Paris Opera, he is now going by the name of Mr Y, the gent who runs the Coney Island amusement park. There, happily, in among the freaks and tawdries who inhabit the place, no one seems to have noticed that the ugly, half-masked man is anything out of the ordinary. More than that, he has been nurtured and cosseted by dance mistress Madame Giry (Maria Mercedes), and her hoofer daughter, Meg (Sharon Millerchip), whose altruism has been only slightly tempered by blind ambition.

The show opens with Phanty sitting at his organ desperately trying to compose a halfway decent tune. (Is this the personal bit, perhaps?) Unable to scribble more than a few bars of nothing much, he lures his still adored muse Christine to New York to sing for him. This is accomplished by faking an invitation from (real) opera impresario Mr Oscar Hammerstein for now mega-diva Christine and her hubby and feckless gambler Raoul (Simon Gleeson) to perform at his opera house.

Christine is also accompanied on the trip by her son, 10-year-old Gustave (Kurtis Papadinis). Amazingly, he is already displaying a preternatural ability to pick out forgettable melodies on the piano. Hist! Can it be? But of course! Yes folks, Phanty and Christine did more than sing and punt on their one night in Paris – like a year in any other place. What a pity Lord Lloyd Webber didn't think to ask Kevin Godley and Lol Creme to write some lyrics for him instead of the doggerel he's got here. (Actually, it's more mongrel than doggerel and the guilty parties should be named: Glenn Slater and Charles Hart.)

What's possibly the most depressing aspect of this multi-million dollar revision - by Simon Phillips - of the show that didn't really achieve lift-off in London, is that it's fabulously spectacular musical theatre. There is a brilliant revolving set and dazzling costume design by Gabriela Tylesova, intelligent and apposite lighting by Nick Schlieper and sassy choreography by Graeme Murphy. It's all terrific, aside from the book, lyrics and music, all of which are mediocre at best and risible the rest of the time. And, if you're the kind of person who'll mull over such things during the many musical longueurs, you'll have to be wondering how come that although the principals are all ten years older than when last seen in Phantom of the Opera, they're all much younger than they were back then. And they don't act nearly as well, either. Why not? Across town right now at the Lyric is Annie and down at the Opera House is The Magic Flute, both demonstrating how to do it all and more. 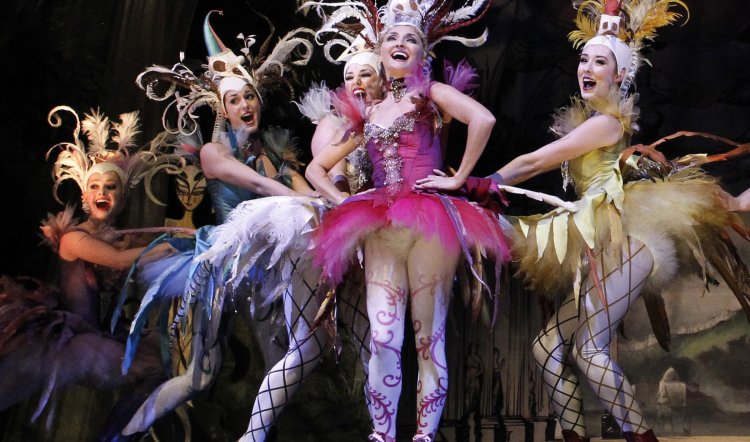 In London among the "mixed" reviews, one critic dubbed this Lloyd Webber petPaint Never Dries. I very much regret I didn't think of that first. I'm also almost sorry I didn't stay for the second half when, I'm told, the whole shebang ground to a halt and the director had to scramble on stage to apologise. Ghastly for the cast and crew, but it would at least have provided a bit of excitement for the audience.

The most distressing thing about Love Never Dies – aside from watching fine performers struggle with such crap material and thinking about the Australian talent that goes begging while resources are poured into this – is the overwhelming stench of cynicism wafting from the stage. The (London) Telegraph said in a 2011 story about the Melbourne opening that, "Once the new updated version of Love Never Dies has completed its run in Australia it will transfer to Broadway." In your dreams, Lord Lloyd Webber! But if you ever wondered why it's been set on Coney Island – there's your answer. Moneeeeeeeee!

Fact is, while the Australian reincarnation has some silky moments, it's still a sow's ear and always will be. The undisputable star of the show is Gabriela Tylesova – and you can't hum her.