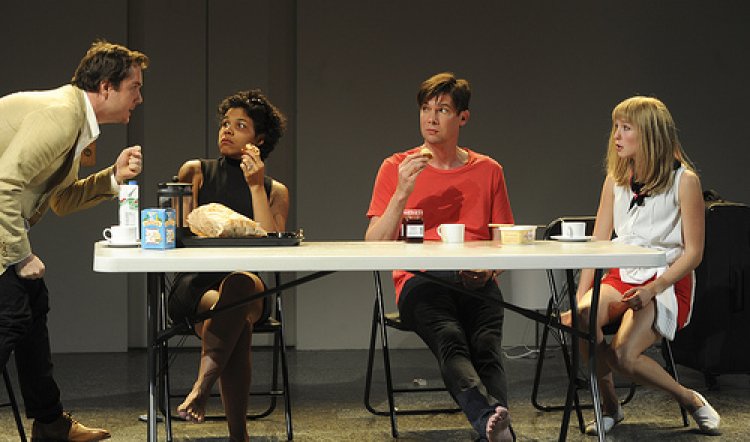 In his program notes director-designer Ralph Myers opens by writing, "When I set out to direct this play I had no idea how strong people's preconceptions were about it." He soon found out and it would be impossible not to know - anyone over the age of 25 has something to say about Noel Coward's perfect social comedy. And most believe they know what's important about how to do it. Mainly, as the playwright's alter ego, Elyot Chase must be teddibly, teddibly English and upper crust; and the rest must of course follow suit.

Myers has thrown this tablet of stone right out the window and shattered it: his actors use their own rather than coached English voices. With this sacrilegious move he's revealed that Private Lives is a delightful, clever play and, in order to amuse and entertain a 21st century audience, it has no need of sepia-tinted reverence for things past. It also has more to say than is often evident in productions that rely on the comic aspects. The humour and wit don't need on comic plummy accents to generate laughter - it's actually humorous and witty anyway.

It does require a gifted and technically able cast, however, and Private Lives has this. Beginning with the superb Toby Schmitz as Elyot, a man on his second honeymoon with a wife as unlike his first as he could possibly find, the play is off to a flying start. Tall, urbane, good looking and always willing to make an absolute ass of himself, Schmitz is a comic natural with a mobile, expressive face and eyes that do funny without any words being necessary. When given words - in this case Coward's rapid-fire repartee - he delivers them to the manor born.

As his ex-wife Amanda - who turns up in the next-door suite in Biarritz, also on her second honeymoon - Zahra Newman is the perfect foil for Schmitz. Chemistry between these two is vital and in this instance they could put on a fireworks display without benefit of extra bungers. From the moment the two ex's clap eyes on each other it's apparent why they divorced and also why they are irresistibly drawn together again. Both are impossible, egotistical and charming - iron filings and a magnet in human form - yet there is also real tenderness between them.

By way of contrast Elyot's new wife is the very young, aspirational and rather daffy Sibyl. That she calls him "Elly" makes it clear that this is a marriage made on the rebound rather than in heaven: Eloise Mignon brings a wide-eyed but easily outraged quality to the second Mrs Chase that's bound to end in hysterics before bedtime. The second contrast is Toby Truslove in the unforgiving but essential role of Amanda's new husband Victor Prynne. Truslove is the epitome of stolid, reliable, loveable and instantly forgettable; the kind of decent chap that a cad needs in order to be able to function. And in her late-entering cameo role as the grumpy French maid, Mish Grigor is right up there with the rest of the cast. 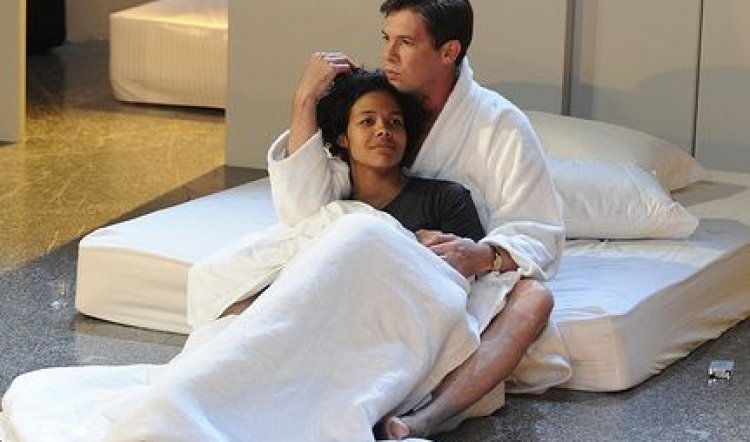 At a scintillating 90 minutes, Private Lives is hugely enjoyable and beautifully done. Ralph Myers has confounded the nay-sayers who believed he'd bitten off more than he might comfortably chew in choosing this play for his major directorial debut. It's a pity, then, that he didn't get someone else to take over set design duties. The bare white wall with two hotel room doors separated by lift doors makes no sense at all. The reason why other productions have the two couples in adjoining suites with balconies - on which the action takes place - is that they spend an awful lot of time sipping martinis and commenting on the view of the harbour from their terraces. Nobody - absolutely nobody - would leave their hotel suite to stand in what must be the hotel's public corridor to enjoy a drink or check out the view; or place their glasses on the floor. If that was the only access to the view, they would be staying elsewhere.

It also makes for some awkward prop shifting when this same wall and empty space becomes Amanda's Paris apartment. Dragging a mattress, pillows and a quilt from one room onto the stage is beyond daft and forces a moment of unfunny, unnecessary slapstick on Newman. That the lift then opens straight into the "bedroom" is crazy and distracting. It's also crazy and distracting that Victor enters (the hotel scene) on a bicycle - although they have to be several floors up and at every other instance, the lift is used to go down to the dining room, bar and car park.

The thinking behind all this is deeply unfortunate and if the cast and direction were any less than sparkling, could have led to disaster. As it is, the packed Sunday afternoon preview audience (I'm overseas for the opening) absolutely adored it and so did I - but I did passionately hate the set and the bicycle.