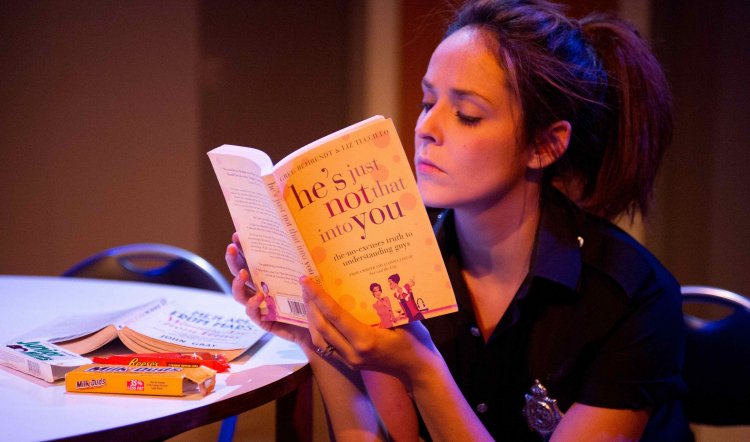 reasons to be pretty

The obsession with female physical beauty reached its current zenith (or nadir, depending on your point of view) on Tuesday evening with the winner of The Biggest Loser on TV and the opening night of Neil LaBute's reasons to be pretty in Darlinghurst. As the third element of a loose trilogy exploring what LaBute sees as society's morbid preoccupation with appearance, the play follows The Shape of Things and Fat Pig, both of which were staged by the Sydney Theatre Company.

This one escaped and has been grabbed by Slip of the Tongue, an independent company formed by director James Beach and actor Andrew Henry with the express intent of presenting the play. Apparently Henry discovered it while studying with Steppenwolf in Chicago.

It opens with a paint-peeling, window-shattering screaming row between a young couple that would make Martha and George sit up and take notice. Steph (Julia Grace) and Greg (Andrew Henry), a pairing of four years' standing, implode before our very eyes over a seemingly innocuous remark by him that shatters her typically fragile sense of self. While lollygagging with his best buddy in a break at their factory, he's overheard saying that Steph - rather than being beautiful - has a "regular" face. Everything that happens after that flows - or crashes - from that one word.

Unlikely? Excessive? Maybe, maybe not. How many women can honestly say they haven't dissolved into a puddle of misery after a chance remark about the hair, the bum, the boobs, the cellulite, the outfit? It may not be logical or reasonable, but it sure as hell is easy to provoke. Whole movies, comedy routines and drug habits are built around the insanely tenuous grip many women have on their sense of their bodies and their selves.

What's even worse for Steph - and a catalyst for further examination of the weight of expectation there is on women's appearance - is that her best friend Carly (Lucy Maunder) was the one to pass on Greg's comment. Setting aside the age-old problem of the righteous bitchiness of girls' "best" friends, her tattle opens the way for very attractive Carly's own pedestal to be gradually whittled away as she begins to suspect her husband, the studly and heedlessly nasty Kent (Stephen James King), of having roving eyes and hands.

The other element of conflict and uncertainty is that Kent and Greg are also longtime best buddies and work together. The contrast between their friendship and communication and that of the two women is stark. LaBute has a brilliantly acute ear for the dreariness, humour, drama and poetry of everyday-speak. And he seems to have mellowed somewhat since the previous plays in the trilogy: three of the four characters are semi-sympathetically and credibly drawn and, while Kent is an arrogant, misogynist shit of a bloke, he is an accurately drawn young man of a type that swaggers along Any Street, Anytown. Within five minutes of him opening his mouth it's impossible not to want to wipe the gum-chewing smirk off his handsome face and see him get his comeuppance; but LaBute doesn't do predictable, so don't get your hopes up. 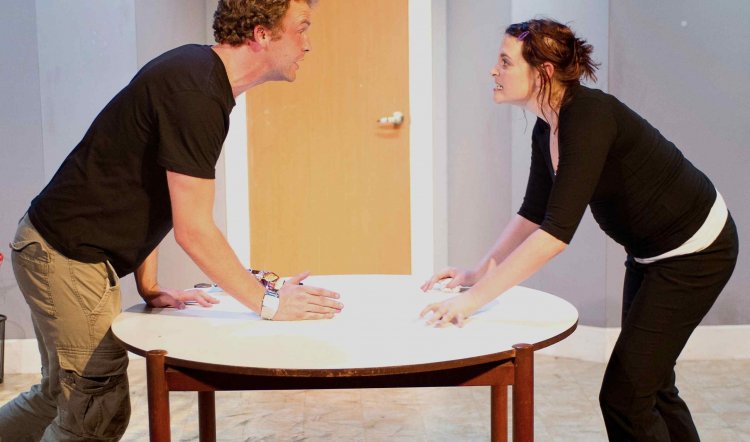 The action takes place mainly in the factory's joyless rec room where sandwiches are eaten, soft drinks drunk and where Greg burrows his way through the American canon - Poe, Hawthorne and Swift - the reading he might be doing if he were in college rather than on night shift. He means well, but can't help putting his foot in it and his inability to understand where Steph is coming from - or going - is at first comical and finally sad, as he's left behind, wrong-footed to the last. It's a lovely performance from Andrew Henry and is matched by Lucy Maunder's Carly, whose sassy minx is gradually revealed as more vulnerable and fragile than she can bear to contemplate. It's good to see her getting her teeth into a non-singing role and giving such a nuanced performance.

Julia Grace's rage, although spiced with sitcom-style one-liners and very funny, is instantly recognisable and when her demeanour is finally tempered by regret and the inevitability of their situation, she and Henry share a poignant scene outside a restaurant. It should ring bells for anyone who's ever known they've done the right thing, but it hurts anyway. Stephen James King, by way of contrast, is never troubled by introspection or self knowledge and he has no idea how much of an asshole he is; it's an irritatingly good characterisation! He and Henry also share the other most powerful scene in the play.

The production's creatives are excellent, voice and dialect coach Nick Curnow especially, as the American-ness of the play is essential to its authenticity. Director Beach balances the comic and awful aspects so that neither overwhelms the other, nor the audience and he gives his actors room to move within their characters. Andrea Espinoza's design neatly captures the seedy discomfort of the factory's staff comfort facility and also solves the problems of the space and its entrance/exit restrictions better than many.

reasons to be pretty is more empathic and humane than some of LaBute's earlier work; anyone coming to it for the first time through this play would be puzzled by his reputation (unjust, I believe) as a misogynist. He captures small-town America with an unflinching ear and eye; it's painfully accurate and also funny. He has also crafted four interesting and living characters out of material that would probably not be malleable or satisfying in lesser hands. It all makes for an evening of grown up, excellent entertainment.