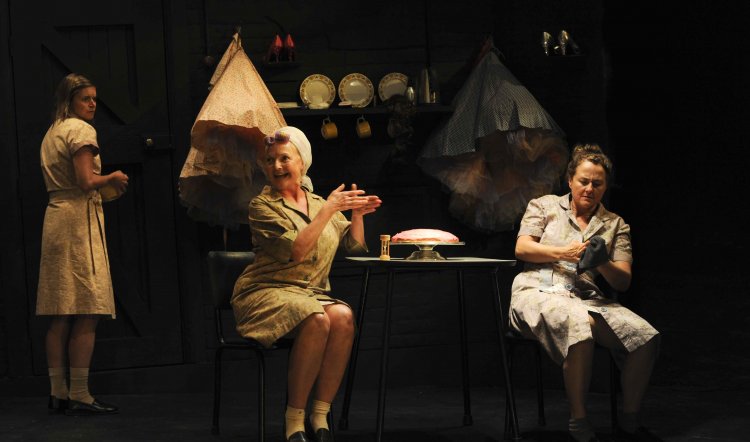 KATE GAUL, the vision and energy behind Siren Theatre Company, has for years been after the rights to Enda Walsh's The New Electric Ballroom. She also pursued pretty much every major company to collaborate as co-producer - to no avail until she approached Sam Strong and Griffin. The result is a richly realised production of a play that deserves and needs such treatment.

Walsh is a master wordsmith - coming from a long tradition in Irish drama - highlighting something that's at odds with much of contemporary chuck-out-the-text-and-wing-it play making. It's impossible to imagine this play being restudied, reworked, re-interpreted, rebadged to the Australian outback or Poland in 1949; it is what it is and is to be savoured for all that.

The New Electric Ballroom is one of those neon-lit but tawdry palaces of bop and knee-tremblers to be found in small towns all over the permanently sodden and miserable west of Ireland. There, nothing much happened from one decade to the next until the 1950s brought bands and microphones and crooners, once a month on Saturday nights. But all of that turned out to be an illusory pleasure - the dreams quickly turning to nightmares when the crooner moved on to his next gig leaving the sour taste of last night's Guinness and fags, sore hearts and the occasional pregnancy for the girls inevitably left behind. (Edna O'Brien's novels vividly capture the lives of Irish women - in particular - of that era; among them, The Country Girls, A Pagan Place, Girls In Their Married Bliss and her memoir Mother Ireland).

The play centres on three sisters, Breda (Odile Le Clezio), Clara (Genevieve Mooy), and Ada, (Jane Phegan). Like Chekhov's more famous siblings, they too share a home in a dreary, nowhere place. But, where Masha, Irina and Olga dream of escape to Moscow, Walsh's women are captive beneath a much lower horizon; it's partly class and partly country. In their incessant yet mesmerisingly articulate chatter, Breda and Clara slowly reveal that they could not accept escape if it were presented to them.

To Clara, the eldest and least robust, a cup of tea and a slice of iced coffee cake is about the sum total of her ambitions. Not that she doesn't fantasise along with the best of them: Breda has to remind her - forcefully - that it was she who made the damn cake, not Clara. But that's the height of Clara's ambition and sadly funny it is too.

Those who saw the touring production of Walsh's The Walworth Farce may hear echoes of that play in this one. Although the former is about the men of an Irish family, trapped in their familial bonds in a mean flat in south London; The New Electric Ballroom draws similar pictures of the ties that bind - without remorse or remit - and the shared stories that keep those bindings tight.

At 40, Ada is the youngest sister and the one for whom there is hope - in the conventional sense. She doesn't share her sisters' fear of escape, but nevertheless, she is as bound to their way of life in the poverty of an isolated fishing village, as if she were physically restrained by her surrounds. As the stories are related and the past conjured up, the reason for their incessant talk becomes clear when Clara says - during a rare pause - "There's a terrible lull in the conversation. The sort of lull that  can get you worrying." 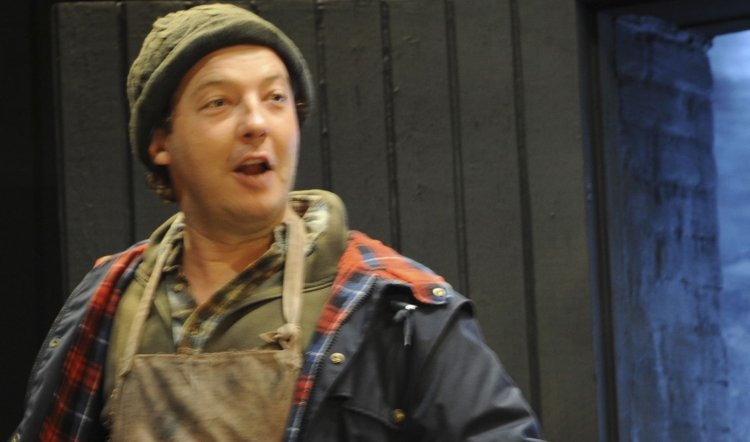 Their talk is so inward-looking that it's hardly conversation; more, they are monologues that happen to intersect, often with a bang and crash of surprise and vexation. This life is interrupted on a regular basis, although it never ceases to shock and irritate them, by the arrival of Patsy (Justin Smith) the local fishmonger. He brings them fresh, plump mackerel and - whether they like it or not and mainly they don't like - all the local news. He tells of the celebration for a 100-year-old's birthday, featuring a letter from the President and vol-au-vents and trifle. But he gets little but abuse and derision in return as this level of excitement is too much for Breda and Clara.

The magic of the language Walsh gives these people has the poignant effect of making their small lives even smaller; their concerns even lesser and their aspirations even more hopeless. It would be harrowing if it were not for the biting humour and often sublime craziness of the mix of fantasy and naturalism that is at the heart of the work. When it becomes apparent that Patsy's dream of being married to Ada - perhaps even going somewhere else - and of "sitting at bingo, filling in the same sheet" is beyond imagining for her, it's clear that whatever visions any of them may have had, none are splendid and all are unattainable. As Patsy well knows, even the seagulls say of him, "What is the purpose of you, Patsy?"

Director Kate Gaul has assembled a well-balanced cast that works well as a unit: the women are heartbreakingly plausible as the benighted sisters. Each brings a particular resonance and pathos to the place they occupy in the hierarchy of birth order and personality. Jane Phegan's moments of wild hope are in stark contrast to her yearning bewilderment for something - anything - but she knows not what. Genevieve Mooy is at once sly, sad and trapped so completely in the past that she has no present that she can grasp - other than the pink-iced cake, and even that is placed cruelly beyond her reach.

As the second sister, Odile Le Clezio charges Breda with a fierceness that is a potent mix of pain, anger and drollery. When she announces to the heedless world that "We don't want to be alone, but we are alone," it's a challenge as much as a cri de coeur. While poor Patsy doesn't have a hope, even after he briefly takes on the ancestral persona of the crooner who is at the core of all the broken hearts. Coming in and out of the action and being missing in it for much of the play, Justin Smith does a powerful job of silly Patsy and holds his own until the final pivotal scene when his monologue tells of everything that has and will happen.

Natasha McNamara is credited as voice coach for the production and she's done a superb job of immersing the actors in the lyrical, softly rainy tones of the rural west of Ireland. Tom Bannerman's gloomy cottage set, lit by Verity Hampson, is serviceable; the costumes - ghastly beigey floral house dresses for every day; can-can petticoats and flared skirts for the long ago dance parties - are virtual characters in themselves.

At 90 minutes, the dramatic poetry and intensely drawn characters have uncommon power, so if you savour the lavish language of Irish plays in general and Enda Walsh's plays in particular, are fascinated by the Seinfeldian notion of stories about nothing much, then you'll be gripped and entertained by The New Electric Ballroom.