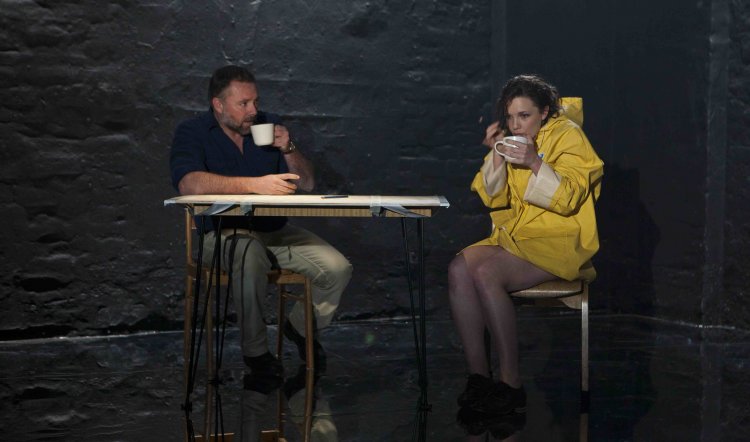 THE SEA PROJECT, Arthur and Griffin Independent at the SBW Stables Theatre, 7-29 September 2012. Photos by John Feely: Iain Sinclair and Meredith Penman above and right.

A frightened, mutilated woman (Meredith Penman) washes ashore on a lonely beach and is rescued by Bob (Iain Sinclair). Who is she? Where did she come from? What is her story? How did she lose her index finger? She doesn't know and there is no one else around who might tell. Her flashes of memory are unpredictable and uncomfortable; she is traumatised by something or somewhere, or even somebody. The stoic and gentle Bob stands back and tries to give her room to explore while, at the same time, offering her a kind of protection. When Maciek (Justin Cotta) suddenly appears out of the blue, the delicate balance is of course destroyed.

It's a modern mystery and an ancient triangle, written by Elise Heart and directed by Paige Rattray, and played out in a dark, empty void and mirrored surface that's equally mysterious and also unnerving. (Design David Fleischer, lighting Ross Graham). The woman, whose accent is from somewhere in eastern Europe, announces that her name is Eva - as good a name as any. And the absence of memory isn't really all that surprising, after all, no one wants to remember being hungry. No one wants to remember music either, if that music evokes memories (and music is peculiarly good at that). The show is wrapped in a live soundscape composed and played by Tom Hogan. It ranges across soft abstract washes of atmospheric discord emanating from an electric guitar to indefinably Euro-folk from an acoustic instrument.

The flashes from the past and Maciek's hearty insistence that she knows him throw up tantalising images: suitcases abandoned beside roads, the possibility of war and other horrors. Nothing is clear. Ironically, as he pushes her further into accepting him and being attracted to him, the possibility of truth and revelation seem to recede. Bob meanwhile, watches from the sidelines, a pastel character - overshadowed by the primary colours of Maciek's ebullience. Will she choose excitement and the unknown past, or comfort and the more mundane present?

Iain Sinclair gives a marvellously subtle performance, full of humour, wry observation and quiet tension. He is matched in subtlety by Meredith Penman whose Eva is a fragile but tenacious woman,    fighting off the ghosts of her past, but tentatively feeling her way into a future. Justin Cotta has a gift role of broad gestures and character and plays it to the hilt, but it's Sinclair and Penman who deliver the real punch. 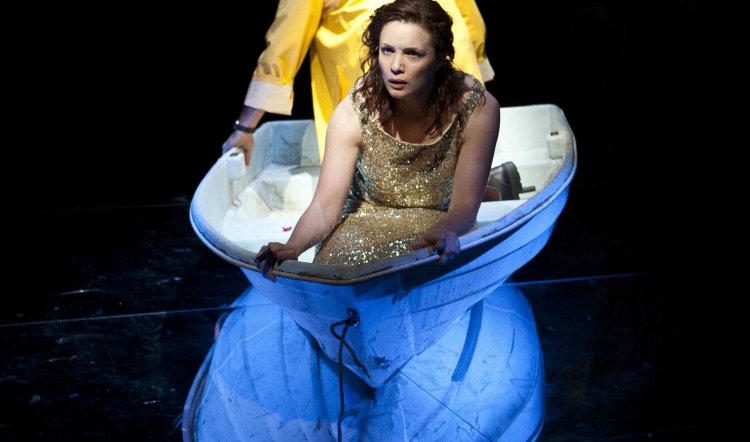 In the end, however, what becomes apparent is that although we might like to think we could re-invent ourselves - be an entirely new person - if we suddenly fetched up unknown in an unknown land, the truth is that we take our old self with us. For better or worse, most of us are who we are and we have to live with it.

Eva's plight is one that must happen tens of thousands of times over in all parts of the world, but it's also on the edge of fantastical. Nothing is tied down to specifics and that's what makes it rather special. The Sea Project is elusive, open-ended and alive with imaginative possibilities. Recommended.