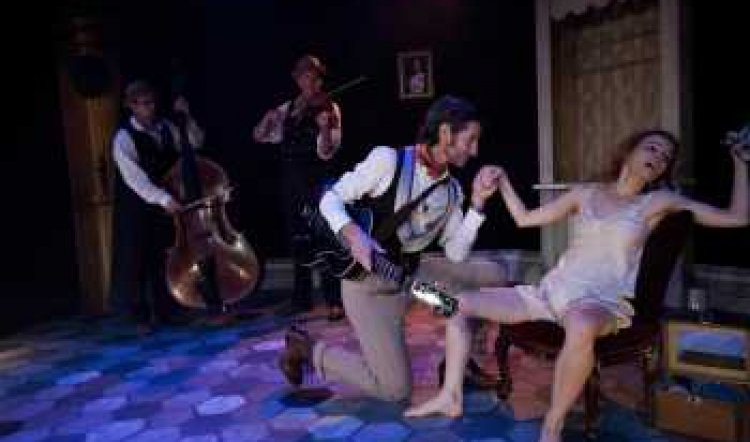 the story of mary maclane by herself

Writer and actor Bojana Novakovic, with her Ride On Theatre partner and director Tanya Goldberg, have concocted a most amazing entertainment from the original writings of Mary MacLane. Novakovic is accompanied and assisted in this endeavour by a trio of musicians: Tim Rogers, Andy Baylor and Dan Witton. And the whole is fashioned in the style of a twisted red velvet and tawdry gilt music hall melodrama with Miss MacLane as free as a bird in her satin undies, while the fellas are got up in bowlers, stripy weskits, strangling neck ties and those elasticated metal shirt sleeve restraints favoured by riverboat gamblers. (Designer Anna Cordingley, lighting by Hartley TA Kemp, sound: Russell Goldsmith.)

Mary MacLane grew up in Butte, Montana when it was a rough mining town on the edge of nowhere in the middle of nothing. The precocious girl was as out of place as any wild, intelligent teenager could be in such a setting. At the age of 19 she published the impudently titled memoir The Story of Mary MacLane. It was an account of her inner thoughts and sexual being, an exploration of life and love, both actual and aspirational. It would raise eyebrows now - despite spiritual sisters such as Isabelle Eberhardt, Francoise Sagan and the feminist sexual adventurers and philosophers of the 1970s; and even Diablo Cody and Tracey Emin - in many ways contemporary Mary McLanes in their own fields. In 1902 Mary's book was simply sensational.

In creating the script and performance, Novakovic, with dramaturg Campion Decent, have taken a cue from their subject and been as audacious and unconventional as MacLane herself. They muck about with dramatic structure and performance norms in ways that echo Mary's own provocative approach to life. Sometimes this is to comedic effect and at others, it highlights the pathos that lies behind so much of MacLane's bravado. In 1902 Mary wrote, "I want a human being to love me. I have need of it. I am starving to death for lack of it," the poignancy and universal, time-travelling truth of this plea suggests why Novakovic was so taken by her subject: she is as alive and vivid in 2012 as she was a century ago - probably more so. 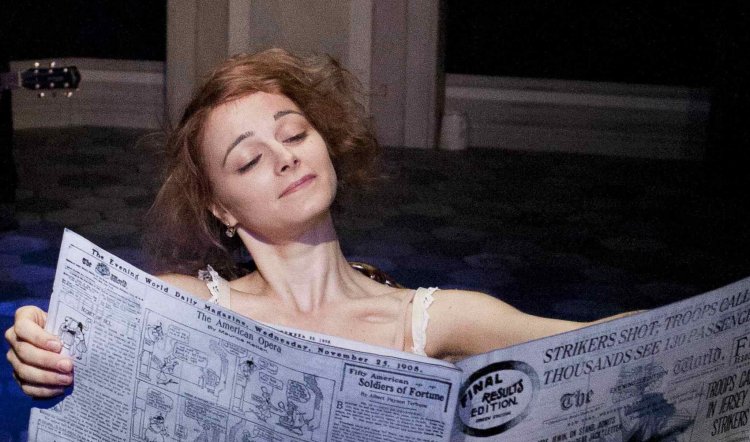 Mary MacLane By Herself is, for much of its speedy 80 minutes, a two-hander. You Am I frontman Rogers takes the supporting role of ringmaster, confidant, sounding board and intermittent storyteller through the original ditties that punctuate the action. He's lanky, charming and as surprising as the rest of this surprising show. Whatever you think you might have been expecting - forget it, you'll be set on your ear - Beelzebub and cold boiled potatoes will never be the same again. And, should you leave the theatre not only reeling from the originality and history uncovered, there's a book available in the foyer - Mary MacLane is hidden from history no longer. Another wonderful show from Griffin; original, unexpected, illuminating, funny and touching - it's already a deserved hit.