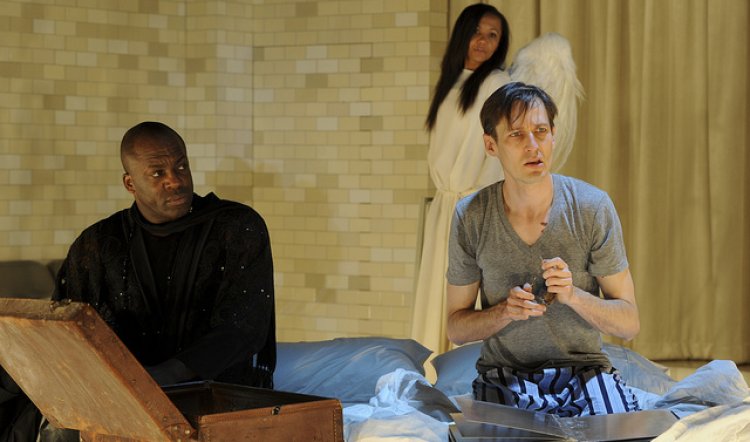 Blessings are upon us! The angels have arrived in Surry Hills and they are magnificent.

Tony Kushner won the 1993 Pulitzer Prize for Drama with this epic fantasy and it was by then already the stuff of legend. Written (and performable) in two discrete parts that nevertheless overlap in time and characters, Angels is at once small stories of everyday life as well as a wide-ranging socio-political drama of late 20th century America. There are two main strands that link the characters, the places and the events, and they are piquantly opposed and linked. In Mormonism and AIDS, Kushner put his finger on two of the most alarming elements of American society of the time. And humans being the change-averse beings that we are, there's an awful familiarity about it all today.

The first wave of AIDS was, in the late 80s-early 90s, wreaking havoc among (primarily) gay men at a time when the Reagan brand of  conservatism was into its second term in power. In the two decades since, after apparently lying dormant but actually merely gathering strength and adherents during the Clinton years, extremely stupid conservatism disastrously rose again with the Bushes and, almost - as Kushner writes in his reluctant author's notes - brought Mormonism into the White House with Mitt Romney. And in the past few years AIDS has been making a drug-resistant resurgence even as gay rights have been pushed to the fore as never before. There seems to be an odd synchronicity and cause-and-effect going on between the two: fundamentalism and radical conservatism (marriage) in one of the most uneasy and weird social revolutions ever.

The background and foundations of Angels make it a strong and absorbing drama, but it's the story linkages - real and imaginary - between the characters that give it human heat and interest. Eamon Flack's production unfashionably heeds the playwright's request that it be transparent and unfussy with an emphasis on magic - handfuls of glitter chucked in the air with the perfect balance of serious intent and total nonsense - and the actors. In so doing, Flack reveals himself as one of the most under-rated and quietly-talented directors to be keeping his own counsel during the current mewling spat over the neo-post-auteur theory. And enough of that for now.

The stories feature a kaleidoscopic mix of real and imaginary, dead and alive, ghosts and angels. They are on stage simultaneously but in different times or places; they may or may not be seen and heard by others - an audient can't afford to be distracted, but actually it's so well done, you'd be hard put to lose track of anyone, any time.

The cast of eight is uniformly superb: Marcus Graham as the odious Roy M Cohn is corruption and dishonesty personified; he oozes malevolence from every pore. As his protege, the frantically-closeted Mormon lawyer and "happily" married man Joe, Ashley Zukerman is cute, weak, selfish, confused and charming - not an easy combination. He discovers himself, in more ways than one, in Central Park in the early hours on the same beat as bitterly grieving and guilt-ridden Louis - who's walked out on his dying boyfriend. Mitchell Butel is at once funny, despicable and tragic, a heady mixture of self-deprecating humour and sardonic tenderness.

As Louis's boyfriend, Prior, Luke Mullins carries the weight of history as the 30-year-old who angrily and sadly does not want to die of AIDS, whose body is wracked with the pain and disfiguration of Kaposi's Sarcomas and for whom the angels are a threat and a promise possibly generated by fevers, possibly not. He is beautiful and agony to watch.

Joe's wife Harper is a woman whose subconscious understanding of what ails her husband is combustibly mixed with her unconscious dissatisfaction with the life of a Mormon wife. Amber McMahon has comedy and pathos at full throttle and in both hands as she pops pills to subdue her misery - and therefore hallucinates along with Cohn and Prior in their AIDS-fevered nightmares. 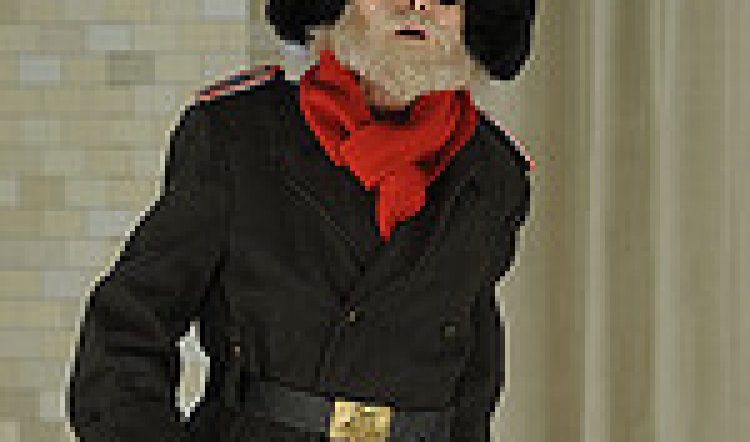 Cohn is also visited by a comically vindictive Ethel Rosenberg - the woman he wrongly pursued all the way to the electric chair. She is one of five roles that suggest Robyn Nevin could be in the running for Best Supporting Actress this year. She also plays Joe's timid Mormon mom, Hannah, the pontificating Rabbi Isidor Chemelwitz and a Red-ragger Aleksii. She is a walking masterclass in concentration and discipline - every nuance and tiny moment are there to be savoured.

Paula Arundell is tasked with making The Angel both droll and credible despite the aforementioned handfuls of glittering oofle dust and Spielberg-style lighting effects as someone remarks. And she is funny and scary by turn - it's quite an achievement. DeObia Oparei also has the tricky assignment of taking ridiculous and making it serious - as the ex-drag queen nurse Belize and as the heavenly travel agent Mr Lies. Oparei - a veteran of the first Belvoir production - is as physically imposing as are his sense of fun and the absurd.

As well as multiple roles, all members of the cast perform stagehand duty and the choreography and the way they do it helps maintain focus and momentum throughout the two plays. Kushner says - in his notes that aren't notes because he doesn't think there should be notes that he is happy with Millennium Approaches and has made minimal changes to it. He also says, of Perestroika, "I've always known that it's one of those plays that refuses to be entirely in harmony with itself…some plays…contain expansiveness, roughness, wildness and incompleteness in their DNA. These plays may, if they're not misunderstood and dismissed as failed attempts at tidiness, speak more powerfully about what's expansive, rough, wild and incomplete in human life than plays with tauter, more efficient, more cleanly constructed narratives."

It could be said of the above, "Well he would say that wouldn't he?" But it doesn't feel like self justification. The proof of it would be to see Perestroika out of sequence or not in close company with Millennium Approaches. He would probably be proved right - at ten minutes to midnight, on a day when the play experience began at 2pm, it didn't feel overlong, unnecessary or incomplete. Rather, the exhilaration and satisfaction of the event bubbled and zinged around the auditorium and the rare and uncommon sense of a memorable occasion was in the air.

As well as the director and on-stage team, the creative input is equally outstanding: Michael Hankin's shimmering, horizonless set of pale tiles fulfils the requirement for a simple, uncluttered place where action and imagination can run free. The lighting design, by Niklas Pajanti (associate Ross Graham), takes in the extremes of drama and simplicity with sumptuous washes of colour and intimate, tiny moments - it's terrific. Mel Page's costumes are early 90s without underlining "period" and hit each separate target, for better and worse! Alan John's snatches of music - from Streisand to show tunes to klezmer and solemn orchestral moments - are connectors as colourful as the lights. And in a production with as much ghostliness, thunder and otherworldly creepiness as this one, Steve Francis probably had as much fun with the sound design as he gives the audience.

There is so much to savour and to love about this production - all the above and also the feelings of sadness and optimism that go with it. Happiness and rage as it becomes apparent that Angels in America is as relevant now as it was twenty-something years ago and that this production honours it and the audience. And on opening night we honoured it right back.