After a seven venue regional tour and now back in its spiritual home once again, this year's Wharf Revue is being declared "the best yet". This happens every year and it's become part of the tradition, so here goes: Whoops! is the best yet. That's not to say last year's show wasn't up to scratch, but somehow it seems that with each passing year the creators and performers find something new and extra. They really are an amazing bunch.

Whoops! is, as usual, the script and musical brainchild of Drew Forsythe, Phil Scott and Jonathan Biggins. This year, however, Scott has taken a break from stage duties and been replaced by Andrew Worboys on piano and Simon Burke as the fourth performer (with the splendid Amanda Bishop carrying the flag for the girls again).

In keeping with the growing sophistication of what once used to be a deceptively knock-it-together, throw-it-on-stage shambles of a revue, the technical crew should also get a guernsey: sound and video designer David Bergman is prominent, as is video artist Todd Decker - there is a screening of a startling new version of Titanic starring, ahem, Clive Palmer for instance. Stage managers Nicole Robinson and Matt Schubach must be run off their feet behind the scenes, such is the speed and frequency of the changing scenarios. Nevertheless, as Simon Burke remarked after the opening night show, "It's not the West End, darling, there isn't a dresser to be seen!" and each member of the cast has more quick changes than hot dinners.

For the audience, Whoops! is an engrossing delight. As well as frequent laughter, there is a richness in the scripting and lyrics that repays close attention. Running from The Addams (Abbott) Family, through to a Restoration comedy - The No Stratagem and an address by an uncanny and divinely hideous Gina Rinehart, the playlets (no longer mere sketches) are a survey of current concerns and horrors. For instance, The Arab Spring, The NRA, The Culture Wars, Annabel Crabb's Kitchen Cabinet and - memorably and brilliantly - The Tale of Eddie Obeid, Rosencrantz and Guildenstern Instead and The Wizard of Oz.

The Revue is an equal opportunity satire - no political party is left unstoned, nor cultural shibboleth unmauled. Rosencrantz and Guildenstern Instead is simultaneously a perfect piss-take and a beautifully constructed pastiche of the STC's most recent big hit from over the road in the Sydney Theatre. Simon Burke reveals a spooky and brilliant talent for mimicry by taking on the characters of both Bill Shorten and Tony Abbott - which, perhaps not deliberately, reveals how little distance there is between what currently passes for political extremes. 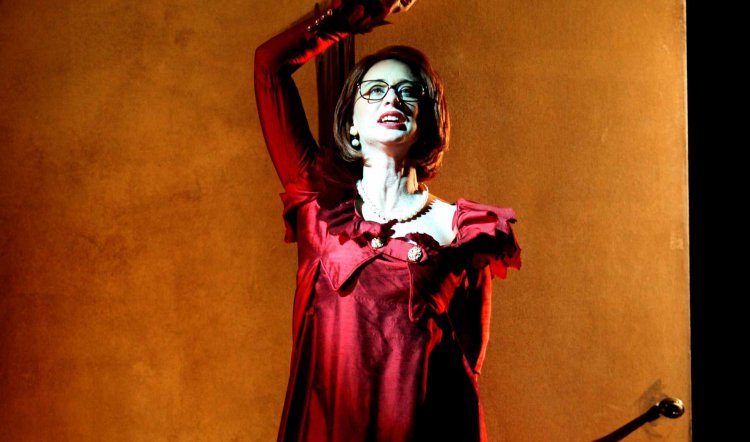 In retrospect however, after the facial muscles have stopped aching from excessive grinning and laughter, what remains is a sense of the heart of the Revue and Whoops! in particular. While both sides of politics get it in the neck with relentless and clear-eyed attention paid to the follies and lesser antics of the great and less great, there is a difference in the quality of treatment. It's impossible - unless you're an unreconstructed fascist - not to feel sadness as the ALP is so vividly portrayed in The Wizard of Oz. Amanda Bishop with her little dog Vote-o is a perfect Dorothy - at once poignant and wicked, (as is her solo swan song appearance as a bespectacled and gowned Julia Gillard). Yet there is no corresponding bleeding, beating heart of compassion hidden in the depths of the jibes at the Coalition - which on reflection is exactly how it is in reality!

On opening night at the Wharf, Tanya Plibersek was in the audience with husband Michael Coutts-Trotter. The gorgeous pair snarfed and chortled throughout and happily put up with a steady stream of fans lining up to pay court to a Labor heroine, before and after the show. She admitted to a melancholy response to a small proportion of the show's content - no prizes for guessing which parts they were.

Whoops! is a show for those who crave to laugh and be made at once merry and thoughtful. The ideas are sharp, the execution even sharper and, with its longer forms and fearless leaps into the frying pan and the fire, it's definitely the best yet. Again. And I haven't even mentioned Wilson, Keppel (but no Betty).