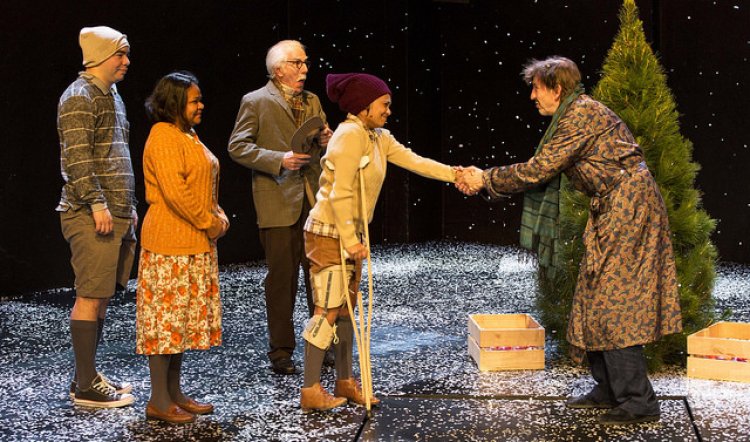 In publishing A Christmas Carol in 1843, the 30-year-old Charles Dickens set out to jog the consciences, tug at the hard hearts and open the plump purses of Victorian middle England and its government. These were people who liked to justify their attitude towards the less fortunate by (mis)quoting Matthew 26:11 – “For ye have the poor always with you…” But then choosing to ignore Deuteronomy 15:11 – “For the poor shall never cease out of the land: therefore I command thee, saying, Thou shalt open thine hand wide unto thy brother, to thy poor, and to thy needy in the land.”

It is more than unfortunate that we are yet again in a plus ça change situation: now we have a prime minister who not only quotes Matthew without embarrassment but can also say, “We just can’t stop people from being homeless if that’s their choice.” And he proudly leads a government that is determined to turn its back on the neediest and most vulnerable of our time – refugees.

So: it’s definitely time to revisit A Christmas Carol...

And in adapting Dickens’ tale of love, compassion, hope and redemption for the Belvoir stage in 2014, Benedict Hardie and Anne-Louise Sarks, working over an extended period with the company of Kate Box, Peter Carroll, Ivan Donato, Eden Falk, Robert Menzies, Steve Rodgers, Miranda Tapsell and Ursula Yovich have achieved an irresistible and unabashed Christmas miracle.

The original is a slim novella – perfect for reading aloud any evening in December by the way – and this version is an even more pared back 80-90 minutes. It opens late on Christmas Eve with Ebenezer Scrooge (Robert Menzies) hard at work on his ledgers in a gloomy, snow-flaked void of misery and meanness (design Michael Hankin, lighting Benjamin Cisterne).

In the book Dickens describes Scrooge thus: “Oh! But he was tight-fisted at the grindstone, Scrooge! a squeezing, wrenching, grasping, scraping, clutching, covetous, old sinner! Hard and sharp as flint, from which no steel had ever struck out generous fire…”

No wonder then that in a chilly corner of the office, crouched dutifully over another ledger and not daring to close it and go home to his family, is clerk Bob Cratchit (Steve Rodgers). Not even the arrival of Scrooge’s nephew (Eden Falk) can raise the temperature or mood. “A merry Christmas, uncle! God save you!” he cries, to which the old man famously responds, “Bah! Humbug!”

Dickens was very fond of the exclamation mark but is otherwise as relevant as tomorrow and this is largely the point of the fable. A Salvation Army officer comes calling in the hope of alms, “What can I put you down for?” she asks. “Nothing!” says Scrooge. “You wish to be anonymous?” she inquires. “I wish to be left alone,” snarls Scrooge. And he means alone with his wealth and his account books full of the records of loans, debts and deprivation on which he preys and profits. 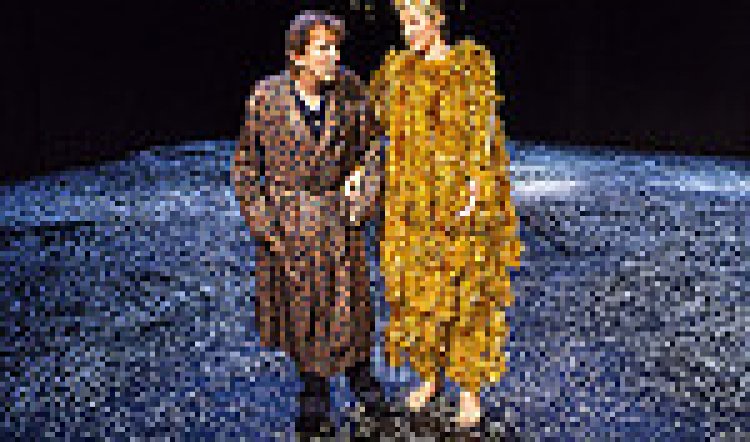 This is Dickens, however, and instead of the solemn political pamphlet he had originally intended (snappily titled An Appeal to the People of England, on behalf of the Poor Man's Child) he was characteristically unable to resist making a story of it. Therefore, in place of a tract there is a tormented man who, when he retires to his dreary bedchamber, is visited by the Ghosts of Christmas Past (Peter Carroll), Present and Yet To Come (Composer and sound designer Stefan Gregory conjures good and creepy spooksound as well as Christmassy FX and music). In light and hilarious contrast Kate Box, as the Present, is a tinsel-festooned party girl whose gaiety and warmth are painful to the increasingly disturbed and fearful miser.

He sees the simple pleasures of the Cratchits' home life and the priceless treasure of the family members’ love for one another. He also sees how he himself was happy once before bitterness overtook him. (Echoes of Dickens’ own childhood of being sent to labour in a blacking factory when his father was imprisoned.)

Each member of the cast, aside from Menzies, takes on multiple and varied roles with Ursula Yovich and Miranda Tapsell also leading glorious a cappella forays into archaic Christmas carols. Costumed for something approximating a 1950s northern hemisphere winter (designer Mel Page) and with fluttering snow flakes providing atmospheric and imaginatively humorous relief from the all-pervasive gloom, there is tangible tenderness and affection between the actors that happily crosses the footlights.

And, from the opening minutes and the sweet charm of Rodgers’ Cratchit, right through the dark night of Scrooge’s soul searching, to the climactic “God bless us Everyone!” from Tiny Tim, there are many moments of lumps in throat and tears in eyes as well as much laughter.

One would have to be a latter-day Scrooge, or a member of the federal government bench not to be moved and inspired by this delightful and clever show; and to leave the theatre with fresh resolve to be kinder and more generous, and as the Belvoir notes suggest to see that it’s “about having a second chance. It is about how precious the life we have left is. It is about finding joy in those around us. Joy!”

And while you’re having a good time and being joyful, spare a thought for stage manager Edwina Guinness and assistant stage manager Sarah Stait, whose job it is, eight shows a week until Christmas Eve, to vacuum up and redistribute all that snow!