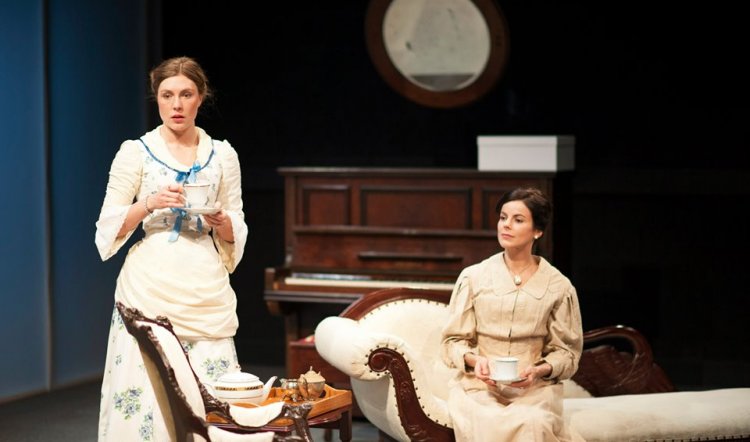 In his program notes, director Adam Cook writes of A Doll’s House’s Nora and Henrik Ibsen’s other heroines, “What freedom can they have without a husband, and without money? Money is the more binding of the corsets that the female characters have to deal with.”

He goes on to talk about the “freedom to move” - which, of course, also comes back to corsets and the lack of money. And it’s that lack of freedom to move - physically, economically and psychologically - that still hampers so many women, 135 years after the play’s first performance in 1879. And, if anyone should ask, it’s the answer to the question of whether the play, and others like it, are relevant in the second decade of the 21st century…

Nora (Matilda Ridgway) is the perfect doll-like wife of Torvald Helmer (Douglas Hansell), a lawyer about to become merchant banker. Social success is theirs with three perfect children and the faithful Helen (Annie Byron) to cushion domestic discomfort; material success is about to follow. What more could they want? What could possibly go wrong?

That last question - and a dozen possible answers - are the inevitable and ominous shadows behind the seemingly light-hearted opening scenes.

In the lightest of adaptations, Cook succeeds in illuminating the text, allowing space and fresh air where a heavier or more colloquial hand, or a more egotistical auteurial intervention, might have killed it stone dead (viz the current Hedda Gabler at Belvoir). His most radical move is to briefly bring on stage the children who are, in keeping with the middle and upper class conventions of the times, not only never seen but also never heard.

Four boys share the roles of the two brothers and on opening night they were played with great charm and cheek by Bill and Thom Blake (ATYP classmates and sons of my longtime friends and fellow critics Elissa and Jason Blake). The startling and unsettling thing about seeing the children we normally only hear about is to underline and remind us of the humanity at the heart of the action.

That essential humanity was most starkly seen in the reinvention of Medea by Kate Mulvany and Anne-Louise Sarks (Belvoir, 2012, review on the archive here) in which Euripides’ unseen children took centre-stage, to devastating effect. And at this very moment is most starkly not seen in the invisible plight of the apparently 30+ asylum-seeking children incarcerated in our name on a ship somewhere on the high seas.

In theatre, as in life, seeing is always better than telling and in this production of A Doll’s House, the seeing is in sharp focus and the telling is told with great clarity. It’s possible that it’s the seminal way of staging this already great play and, arguable though that might be, the result is 130 minutes-plus-interval of brilliantly absorbing theatre.

As played by Matilda Ridgway, Nora is a bird in a gilded cage who is only too aware of the bars but also understands her position on her perch and how to maintain her balance and the supply of seed and water. As she sneaks a forbidden chocolate from various brown paper bag stashes or pretties up to her husband to keep his pomp and circumstance inflated, the brittleness of her gaiety is excruciating - and familiar.

Then reality comes calling. First in the form of Nils Krogstad (Anthony Gooley) a bank employee whose moonlighting sideline as a moneylender snared Nora years before. And then with the unexpected arrival of her old friend Mrs Kristine Linde (Francesca Savige). With small suitcase and poor thin coat on Christmas Eve, Kristine is a penniless widow and a somber blast of winter in the over-warmed Helmer household. The ensemble is completed by Dr Rank (Barry French) Torvald’s old friend and a man who has for long been hopelessly in love with Nora. 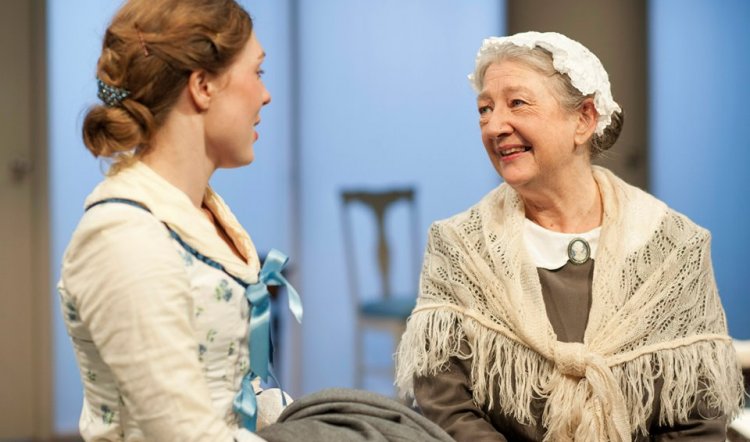 Ibsen links these characters as deceptively as the deft stitching Kristine performs on Nora’s torn fancy dress costume. Their assembly is also interwoven in time and motivation. Early on Nora is characterised as a hopelessly ditzy spendthrift, indulged with long-suffering good humour by Torvald. Nevertheless, the coming of Krogstad tells the audience that it was she who saved her husband and family when, unable to cope with the pressures of the law, his mental collapse threatened them all.

Nora borrowed money from Krogstad to fund a health-restoring year in Italy (I wish) and has been paying it back since through scrimps and saves in her housekeeping money. That she forged her father’s signature on the contract is something that comes back to haunt her. She, in kindness, persuades Torvald to give Kristine a job at the bank without realising that this will result in Krogstad being dismissed to make way for her.

The domestic drama of these stories is as current, mundane and gripping as any soap - which is its genius as entertainment and made seamlessly contemporary by Cook’s adaptation. The same can be said of the deeper, darker element of sexual politics. The gradual emergence of Nora as a three-dimensional, thinking, decisive human being - rather than a decorative doll accessory for the successful man - is equally up to the minute.

Doubt that? Think only of the stories that hit the headlines virtually daily of women murdered by their spouses. And why? Because the concept of ownership of a woman by a man is still tragically current - you leave me and I will kill you - and/or your children, and/or your family.

All of this is stirred to the surface by this spare and spectacular production by Sport for Jove. The performances are uniformly fine, led by the dynamic, intelligent and nuanced Matilda Ridgway. As unwitting pompous ass Torvald, Douglas Hansell is a fine foil as a man hopelessly trapped in his times and social position. He is unable to see beyond the end of his nose so, when the reality of the feminist future gives it a bloody punch, he is utterly undone by the experience - and we surely cannot condemn him.

As Krogstad, Anthony Gooley successfully treads a fine line between unctuous menace and victim of life and circumstance; Francesca Savige, as Kristine, delivers a frightening yet inspiring portrait of what awaits a woman who takes her life and future in her own hands. Dr Rank is the least developed but nevertheless pivotal character and Barry French brings sweet sadness and credibility to the man. And as the sole representative of the neglected lower order, the wondrous Annie Byron is endlessly interesting and touching in the fine detail and subtlety of her nanny-cook-housekeeper Helen.

The rectangular black box of the Reginald space doesn’t naturally lend itself to a middle class Norwegian living room but costume and set designer Hugh O’Connor has overcome the challenge. Carefully chosen and placed items of period furniture (armchairs, chaise longue, piano, hatstand, coal stove) are backed by an opaque blue-lit wall (lighting Gavan Swift). This suggests any number of things: winter, society’s basic disinterest in what’s going on in front of it and also, as the characters come and go through the three doors, their shadowy presence and absence and final lack of substance in that world - and this. And finally, of the brutal, blank inhumanity that is on the periphery of our comfortable world.

Make of it what you will, the effect is riveting and for any woman, 1879 or 2014, young or not so young, Nora’s observation about herself is a wake-up call: “I think I am a human being before anything else. I don’t care what other people say. I don’t care what people write in books. I need to think for myself.”