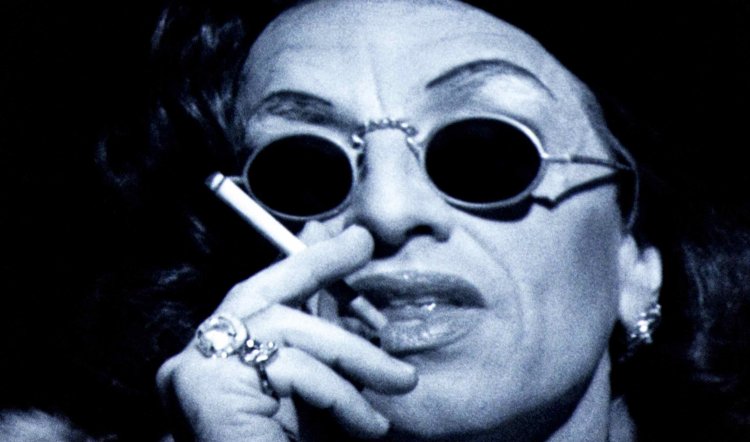 After the popular and critical success in Sydney of Melbourne’s Ash Flanders and Declan Greene – aka Sisters Grimm – with Little Mercy and Summertime in the Garden of Eden it must have seemed like a lay down misere to throw money at them and anticipate another hit.

In hindsight, however, the thing about Sisters Grimm is that for these creative wizards it’s been the absence of loads of cash and the presence of a lot of inventive ingenuity that’s made their work so special…

Unfortunately, after the opening 10-15 minutes of excitement and potential – evidenced mainly in the characters and performances of Paul Capsis and Sandy Gore – Calpurnia Descending very quickly nosedives into a wanton waste of money and talent. And in the end it seems an awful lot longer than the hour and 20 minutes of its intended running time. (On opening night a technical glitch meant the house lights went up and Baby Elephant Walk was played over the PA on repeat. But repetition didn’t clarify why it had previously accompanied someone in a rodent costume who capered about the stage apparently being amusing.)

The opening and really, only idea (and a good one) is to cast Paul Capsis as Beverley Dumont, an aged, wheelchair-bound Broadway diva who lives in Miss Havisham-style embitterment with mustachioed amanuensis Sandy Gore. The echoes of Hollywood classic All About Eve are deafening at this point and watching Beverley swigging from one of her hidden bottles, feral eyes seeing betrayal in every shadow, is to hear Addison De Witt (George Sanders) saying to Bette Davis’s fabled character:

“We all come into this world with our little egos equipped with individual horns. If we don’t blow them, who else will?”

Yet Margo Channing, like Miss Dumont, was right to fear betrayal and blind ambitio and her Nemesis – Eve – is resurrected here in Violet St Clair (Ash Flanders) a starlet who puts the disingenuous into ingénue. And then there’s Calpurnia…

Like Miss Dumont, Julius Caesar’s third wife foresaw death – a bloody dagger – and was most famously portrayed by a ravishing Greer Garson in the Julius Caesar of 1953. It also starred Marlon Brando as Mark Antony, James Mason as Brutus, John Gielgud as Cassius and an underpowered but pretty Louis Calhern in the title role – and was camp as a row of tents. 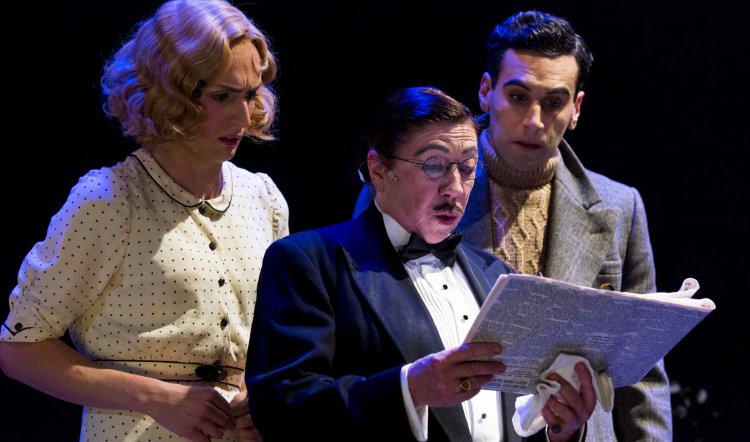 In this context, however, it’s probably the Joan Sims Calpurnia of Carry on Cleo that more easily bears comparison. Said by experts to be the best of the legendary Carry-Ons, this retelling of the Roman romance featured costumes and sets abandoned by the Taylor-Burton epic when it relocated to Cinecitta. Carry On Cleo also starred Kenneth Williams as Calpurnia’s imperial hubby and Sid James as love-hunk Mark Antony. And it got progressively sillier from that point on.

None of this has anything at all to do with Calpurnia Descending, by the way, but could have been a more fruitful source of secondhand ideas than what’s on hand here. That ideas are in short supply is revealed – belatedly on opening night – when a screen descends and, in the absence of anything better to do, the rest of the drama is played out on it. That is, it’s filmed live and very badly, and for no apparent reason other than – hey, nudge nudge, we’re homaging old Hollywood ­– and it hiccups a lot and is out of sync.

Whether or not the soundtrack and visuals are intended to be seriously out of step or whether it’s simply a Brechtian encomium isn’t clear, but it does make it difficult to watch and, despite the non-stop shrieking giggles of a few dizzy baby queens, it really isn’t funny after the first few unhinged exchanges. And in an audience that isn’t primarily drawn from DIY drag-queer theatre, the inane and sustained guffaws end up giving camp (which is all about wit and brilliance) a bad name.

That aside, Calpurnia Descending has flashes of brilliance and moments of wit and a lot of visual pleasures. David Fleischer’s set and costumes and Katie Sfetkidis’s lighting are richly arresting, while composer and sound designer Jed Palmer works overtime to underscore the action to atmospheric effect. Animator Matthew Greenwood and AV designer Matthew Gingold, on the other hand, could do with a quick read of Less Is More 101: just because you can do something isn’t necessarily a good reason to do so.

Paul Capsisand Sandy Gore make more than the best of what they’re given; he is crazily touching and credible, while Gore moves from subtly patronizing to deliciously sleazy – butler to Broadway producer – without apparent effort. Both deserve so much more than what’s on offer. The same goes for the audience. Yet again this is an example of someone saying with much excitement, “Hey! I’ve got a great idea!” Then, having explained it, no one else was on hand to apply the brakes of intellectual rigour and say, “Okay, that’s fine – but then what?”