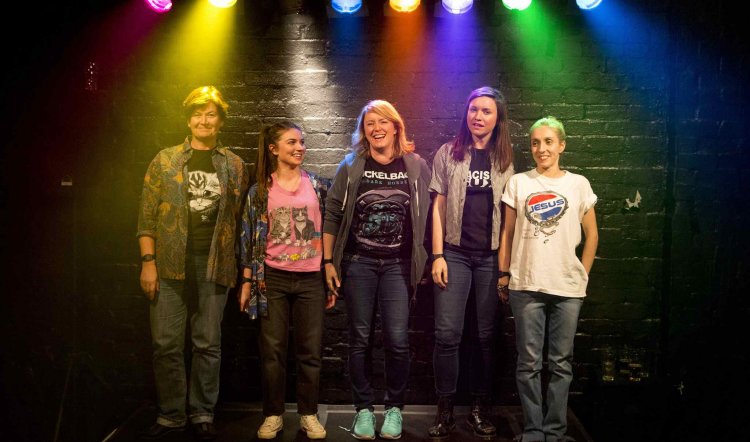 IS THIS THING ON?

Brianna is a stand up comic. When she starts out, as a teenager, she has all the confidence of youth and precious little ability to go with it. Her routine is excruciatingly bad and as written by Zoë Coombs Marr is so certain and unfunny it takes some minutes to realise the writing and characterisation are actually brilliant - that the awfulness is intentional and there is structure and purpose behind the groan-provoking “jokes”.

In a recent interview in Time Out, Coombs Marr says of Brianna, “She is part projected future, part nightmare, part existential crisis. The person she resembles most is Sisyphus, pushing shit uphill forever, never getting anywhere and trying to find meaning in the nothingness.” And that’s a succinct and perfect description of the character who is played - at various points of her life and career - by five women. The tongue-tied, wide-eyed, nerve-racked baby comic is Madeleine Benson. A few years on and in a carapace of cynicism, it’s Genevieve Giuffre’s turn to challenge the audience. Her nodding dog incantation of “I love you guys” becomes the refrain that repeats with more or less sincerity depending how well the jokes are going down – or not.

Prior’s Brianna is not only at her most successful but also reaches the point of realising that after the zenith of a small career is a decline whose inevitability is terrifying. This is, of course, because she is a woman and among other things the small matter of invisibility comes into play. Fiona Press brings wry humour and understanding to the older Brianna. There is sadness and gravity as well as the late-blooming ability to make people laugh: the irony is intense.

As directed by Coombs Marr and Kit Brookman, Is This Thing On? is fast moving, focused and frequently surprising in that it continually confounds expectations and delivers a show that is moving and emotionally rich, rather than knock-about funny. Staged as a stand up routine, Is This Thing On? is nevertheless a tightly scripted play telling one woman’s life and the way that and the comedy routine are meshed makes some of the best writing of this year.

Adding to the mix are the tremendous set by Ralph Myers - a vomitous RSL carpet, a bank of pokies and fake brickwork over real brickwork - with lighting by Verity Hampson that complements and comments on the action. All in all, Is This Thing On? is clever, confounding and beautifully executed. Recommended.