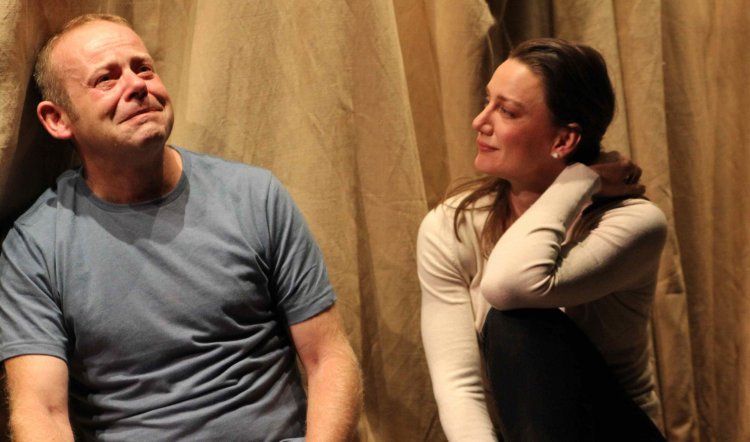 ON THE SHORE OF THE WIDE WORLD

ON THE SHORE OF THE WIDE WORLD, Pantsguys Productions and Griffin Independent at the SBW Stables Theatre, 8 January-1 February 2014. Photography by Rebecca Martin: Huw Higginson and Amanda Stephens-Lee (above); right: Graeme McRae and Lily Newbury-Freeman.

Of the UK's younger stage writing stars, Simon Stephens's work is little performed in Australia. However, in 2012 Pantsguys scored a big hit with his Punk Rock from 2009 and have now gone back to 2005 for On The Shore of the Wide World. It's an absorbing family drama of three generations and three hours including interval that was co-commissioned by the National Theatre and Manchester's Royal Exchange.

In his program notes, director Anthony Skuse astutely skewers the essence of this play and a lot more besides with a quote from Robert Hughes: "It is easy to look but learning to see is a more gradual business, and it sneaks up on you unconsciously, by stealth. The sign that it is happening is the fact that you are not bored by the absence of the spectacular." This is such a sweet truth it could fair make your eyes water - particularly in the context of this play...

Playwright and director both have a clear-eyed vision and skilfully avoid the obvious, the cliche, the bathos, the melodrama; indeed all the elements that could so easily be - and often are - found in such a work. In their place: subtlety, originality, pathos and drama.

Set in Stephens's native Stockport (the east Midlands and as foreign to London and the south-east of England as it is to us) On The Shore of the Wide World introduces the Holmes family in an unhurried and sure series of story-tellings. Young Alex Holmes (Graeme McRae) is bringing home his ballsy girlfriend Sarah (Lily Newbury-Freeman) for the first time. His dad Peter (Huw Higginson) is okay about it in an inarticulate English dad kind of way; his mum Alice (Amanda Stephens-Lee) is not as sanguine, although polite from between tight lips. On the periphery are Charlie - granddad Holmes (Paul Bertram) - and his inexplicably timid wife Ellen (Kate Fitzpatrick).

As so often happens, Alex's younger brother Christopher (Alex Beauman) develops an instant sweet crush on Sarah, but it's not to be. This is not Happy Families of course and the underlying theme of "if only" is expressed by various characters as "I nearly did..." Peter's business is the restoration of old buildings on which he is able to lavish the painstaking attention and passion he is unable to give his wife and sons. He has taken over from his father, whose own most loving relationship is with alcohol and then his grandsons. But all changes when another side to his avuncular sharing of ciggies with the boys is unexpectedly revealed as Christopher walks in on a chilling scene of quiet domestic violence.

There is a tragedy but it's barely noticed or acknowledged until its devastating ripple effects have already wreaked havoc. It's possible that you first become aware of it while laughing at some of the obliquely humorous moments. Meanwhile, it seems that Alice's unhappiness is because Alex and Sarah decide to leave Stockport for the bright lights of London. Nothing is as it appears on the surface, however, and the unpicking of expectations and assumptions and the guileful way revelations are spotted in a mental rearview mirror are engrossing. 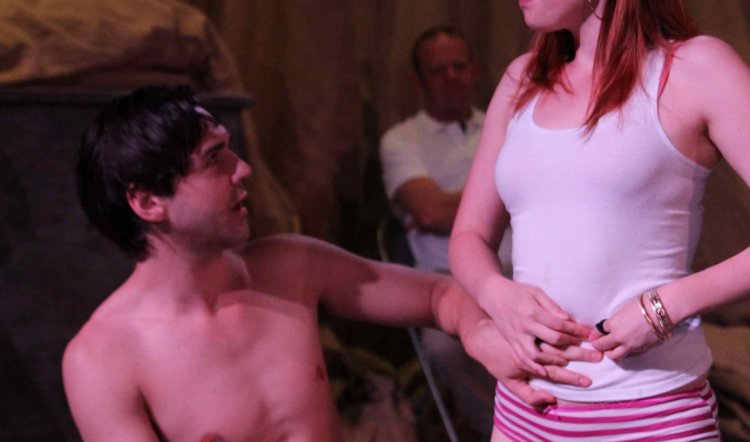 As well as the family members there is Peter's client Susan (Emma Palmer) a posh young pregnant woman who slowly realises she has under-estimated the not-so-simple artisan. And Alex's no-good best mate Paul (Jacob Warner) whose flat he and Sarah share in London; and finally, John Robinson (Alistair Wallace) whose relationship with Alice is a see-saw of awful coincidences and fragments of (im)possibilities.

On the tiny Stables stage, director Skuse choreographs the cast of ten with deceptive ease and characteristic sensitivity. Set designer Gez Xavier Mansfield wisely eschews a literal interpretation of lower middle class suburbia in favour of a neutral abstract backdrop of draped canvas and a couple of free-moving structures that fill in for whatever's needed. Lighting designer Sara Swersky has the task of focusing on small moments while other cast members invisibly observe and it works well, as does Marty Jamieson's soundscape - muted TV, traffic noise, machinery. The final brick in the edifice of a fine production is voice and accent coach Linda Nicholls-Gidley. She's succeeded pretty much in schooling most of the cast in an unusual Midlands voice that slips rarely and delivers the specific and essential cadences of the language they speak.

Huw Higginson and Amanda Stephens-Lee are outstanding as the middle generation of the Holmes family: tender and heart-rending in their different predicaments. Newcomer to Sydney's professional stage is 2013 NIDA graduate Lily Newbury-Freeman; she is a firecracker performer whose name should be noted under "will go far". At the other end of the career spectrum, it's great to see Kate Fitzpatrick back on stage and her talent hasn't deserted her as she convinces in the unlikely guise of an ageing, broken and battered wife. It should be said that there isn't a weak link in the cast - it's a company of fine actors all working at the top of their game.

On The Shore of The Wide World won the Olivier Award for best new play of its year and it's easy to see why in this moving, excellent and enthralling production - give yourself a treat, go on. Don't find yourself saying "If only…" and "I nearly did…"