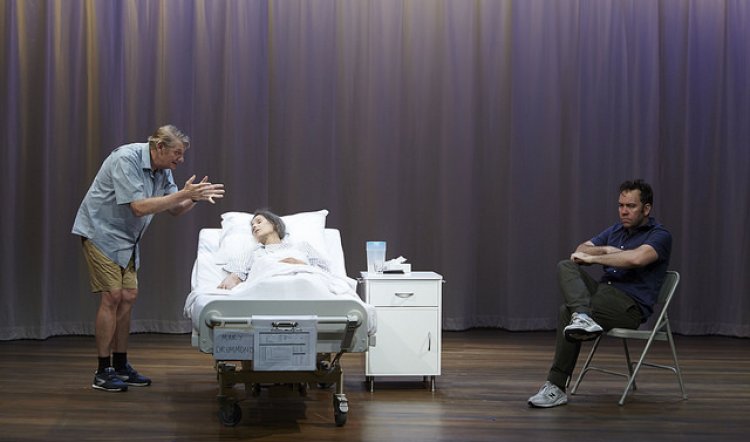 ONCE IN ROYAL DAVID'S CITY

In one of a series of roles - this as a naively well-meaning private school teacher - Tara Morice smiles with artless encouragement at theatre director Will Drummond (Brendan Cowell) and reassures him that coming to talk to her class about political theatre will be a breeze. "And politics would not be an issue," she beams. "Our headmaster is a history teacher. He knows Marxism is dead."

Will is momentarily pole-axed by both her statement and her assumption, as are many members of the audience, especially those who aren't thirty-something somethings-in-big biz. The former gasp, the latter chortle - it's a key moment and key reaction to Michael Gow's new play, Once In Royal David's City...

She wants him to tell the kids about Brecht and Brecht's theatre - alienation and all that - but it's instantly apparent that she knows little and cares less in any real sense, she has an hour of class time to fill. The encounter also highlights for him that what matters to him is now old fashioned and rather quaint; Brecht himself of course, Marx, class and oppression, workers' rights, social and public good. It's a bit like being a feminist, really, although that's one thought that doesn't seem to cross his mind.

Like many artists and thinkers of Will's (and Gow's) age, he is at a crossroads. In a merrily Brechtian and non-linear telling of his story (distanciation anyone?) he is a theatre director who has just withdrawn from a production, ostensibly because his father has died. Really, however, it's because he couldn't deal a moment longer with a dire rehearsal of The Importance of Being Earnest in which Bracknell (Helen Buday) savages a haplessly forgetful and ageing Prism (Maggie Dence).

And he is waiting for his mother Jeannie (Helen Morse) at Ballina airport so he can give her the best ever Christmas. His dad (Anthony Phelan) we learn in an excoriating speech from Morse to an occupational therapist, was a decent man; a 30-years faithful sheet metal worker tossed on the scrapheap of Capital.

Will is as angry as his mother is bitterly sad and that anger spreads wider than his personal grief when his mother finally arrives. It's obvious to anyone but him that she's very ill, dying in fact, as an impatient "foreign" doctor points out (Lech Mackiewicz). On a bare and mostly brightly-lit stage where a white curtain is drawn around a circular track to open and close off the space (Nick Schlieper) Will's life takes shape around Jeannie's hospital bed or its absence. Their relationship and its shifts and nuances are played out brilliantly in a single scene, related by Jeannie, when he was once lost and found on Bondi beach in two wickedly subverted versions of the same recollection.

His youth is represented by a life-changing pilgrimage to Berlin to visit the Berliner Ensemble and explaining that to a border guard (Harry Greenwood) at Checkpoint Charlie. Now, the Wall is long gone, as are the verities on which Will based his life and work. The poignancy of what Will is facing is extreme and Brendan Cowell is the funny, compassionate and always compelling centre of the piece. His performance is magnetically powerful without overpowering the various and mainly fleeting presences in his life - he's at his best.

Gow and director Eamon Flack have contrived a non-naturalistic and deliberately theatrical telling of what is otherwise an ordinary tale of ordinary people - in all the extraordinariness that inevitably flows from it. Hideous bossa nova Christmas carols on the hospital PA contrast with the same in tight and sprightly a cappella harmonies. These are delivered by members of the cast led by Tara Morice in a witty soundscape crafted by Alan John.

Fans of Michael Gow will be more than happy that he's finally come up with a new play after Toy Symphony of seven years ago. He is again exploring matters of the heart and the family that resonate sweetly and sadly all the way back to Away; however, the older, wiser and perhaps politically sadder writer is now also preoccupied by politics. The blurb says, "It’s about the old working class and the new middle class and what one has to learn from each other," but it's much, much more than that.

Once In Royal David's City speaks to those who are dumb-founded by the complacency and hypocrisy of today's Australia, by the easy cruelty and dishonesty of our politicians and the staggering inequity of this corporate-dominated society. It's also extremely and acidly funny, touchingly compassionate and the performances of all are thrilling. The closing scene is all of those things as Cowell's Will Drummond finally bites the bullet and delivers his lecture on Brecht and political theatre to the privileged children of the sunburnt country.

Before that, however, Anthony Phelan, as the daffiest and worst-dressed Bible-basher ever to sneak into a dying woman's hospital room, has delivered the answer to the meaning of life and God. Only a master playwright and actor could make this vignette at once credible, moving and hilarious - they make it look easy. I love this play and this production.