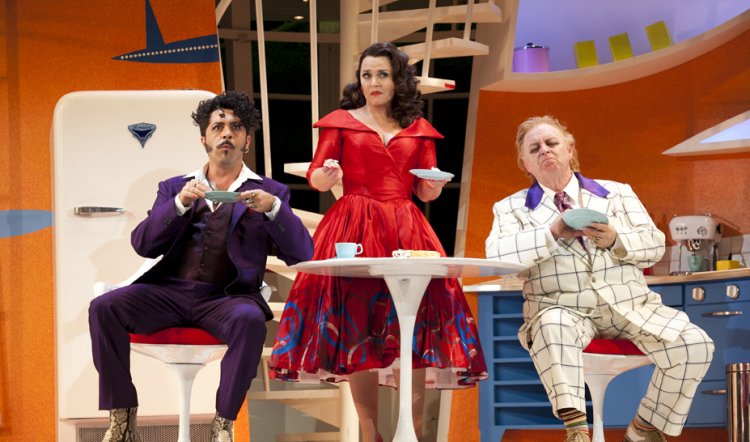 THE TURK IN ITALY

Europe spent 1814 in a variety of wars and general upheaval - largely thanks to the Bonapartes - while the precipitately-named War of 1812 was still rumbling on between America and England. The times were uncertain and dangerous, small wonder that young Giaochino Rossini was so popular with audiences. The Turk in Italy, his opera buffo, was first performed at La Scala in August and he was just 22. The year before he'd scored a big hit with The Italian Girl in Algiers; he made people laugh and forget reality for a few hours and they loved it, he was a rock star.

Fast-forward 200 years and guess what - wars and general upheaval on all fronts and people happy to escape it all for a couple of hours. More than that, The Turk hasn't been staged in Sydney since Lyndon Terracini was a mere lad and Opera Australia badly needs a new comic offering in its repertoire. And if that were not enough, the stars have quite literally come together to make a production possible...

The stars in question are the indomitable Conal Coad, the magnificent Emma Matthews, the brilliant Simon Phillips, the ingenious Nick Schlieper and the incomparable Gabriela Tylesova. Each brings an extra zing to the table that has resulted in a production that would grace the stage of any company anywhere. And let's face it, if you're going to cook up a flummery such as The Turk in Italy, the vital ingredients have to be beyond first class for it to work.

Set and costume designer Gabriela Tylesova lays the groundwork with an ingenious and stylish two-storey revolve-within-a-revolve that reveals the Bar Geronio, the penthouse above it and the kitchen behind it. All is set on a whirl of grassy knolls and gorgeously lit to resemble summer mornings and evenings (lighting: Nick Schlieper). Here, variously, espresso is made, cocktails are whizzed, assignations are made and lacy black undies are hung from the bar's neon sign. It's a dazzling confection of Miami, icecream pastels, architectural angles and I Love Lucy with flared skirts, heaving bosoms, loud suits and innocent naughtiness by the scoopful.

At Bar Geronio works Prosdocimo (Samuel Dundas) a would-be poet and playwright in search of the perfect plot. He's hopeful of some new material when it's revealed that Geronio (Conal Coad), his boss and cuckold-in-waiting, suspects much younger wife Fiorilla (Emma Matthews) of being up to no good. That train has long since left the station, however, with Fiorilla's discarded suitors and hopeful lovers filling every compartment.

As so often happens in seaside destinations, such as Lampedusa for instance, boatloads of foreigners keep turning up. In this instance it's a band of gypsies and burlesque performers, led by Albazar (Graeme Macfarlane), who arrive at the same time as a shipload of Turks, whose boss Selim (Paolo Bordogna) uncannily resembles The Artist Formerly Known As Prince. The latter is soon schmoozing his way up Fiorilla's voluminous, bias-cut skirts, much to the chagrin of Narciso (Luciano Botelho) who, to that point, had assumed his route into her knickers was a given. And let's not forget young gypsy girl Zaida (Anna Dowsley) - Selim's first love who was sold into slavery somewhere in the back story. She is as ticked off by the new twist to the plot as is Narciso and it thickens as all try to catch out all the others while the other is protesting undying affection, or somesuch. 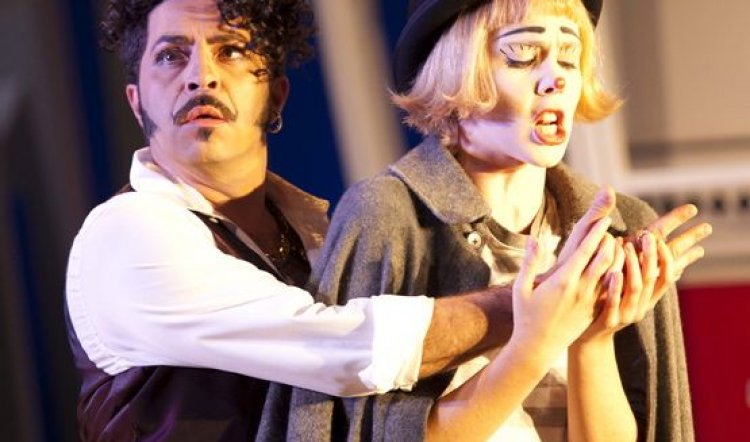 Meanwhile, in between tending bar and eavesdropping with the zeal of a News of the World reporter, Prosdocimo is frantically scribbling notes. His opera is coming together, but he needs a second act. He has read Horace of course, and wisely decided against his dictum that five acts are essential. Prosdocimo knows his audience - chortling away in the dark - and writes in an interval so everyone can repair to the (real) bars. This is a production, by the way, where the surtitles are an essential part of the action. Written by Simon Phillips, the "translation" must have original librettist Felice Romani guffawing in his grave and perhaps wondering what a "root rat" might be.

In essence, although lightweight and achingly silly, The Turk in Italy has been taken extremely seriously by management and creatives alike. Comedy is serious - if it's to work - and Phillips is possibly one of the best in the world at finding the joke - visual or otherwise - in the unlikeliest situation. No pratfall, double take, double or treble entendre, hula hoop or soda syphon is left untouched in the quest for amusement. The Turk is a laugh a minute from beginning to end.

Not that the music is subservient to the comedy however. The company is led from the front by Emma Matthews. She is fast developing into one of the greats and is in her prime as a powerful and true colaratura soprano. As if that were not enough, she is also one of the best actresses in opera - and as at home and inventive in comedy as she is dramatically electrifying. She is ably supported by Dundas, Coad and Macfarlane - all fine singers and unselfconscious clowns. There is also an exciting mainstage debut by Anna Dowsley - a voice and comic performance to savour.

Paolo Bordogna as the primping, posing Selim, accomplishes the tricky double of being both ridiculously silly and sexy-hot - not easy for a man, especially the former requirement. On opening night Luciano Botelho seemed to take a while to relax and sounded tight and almost strangled for much of the first act, but that changed once he got into his Elvis in Vegas cozzie. The OA Chorus - the gals all splendidly wiggly, Jane Russell pin-up style and the men as blobby, flabby or occasionally muscular as men are allowed to be - took to the director's extreme choreographic and performance demands with gusto and conviction as well as singing their hearts out. Conductor Andrea Molino also gets the best out of the always reliable AOBO and Rossini's runaway score is bright and sharp in their hands.

Most often the problem with comic opera is that it just isn't funny. Simon Phillips and his team have seen off that spectre and given Opera Australia a dangerous gift: a show that should be a shoe-in for the repertoire for the foreseeable future but one which will definitely falter and flop if re-rehearsed by directorial hands less sure and ingenious than his. Meanwhile, The Turk In Italy (and his moll) deserve to be a huge hit and if you want to hear and see one of the finest singing actresses of our time - Emma Matthews must be your trollop of choice.