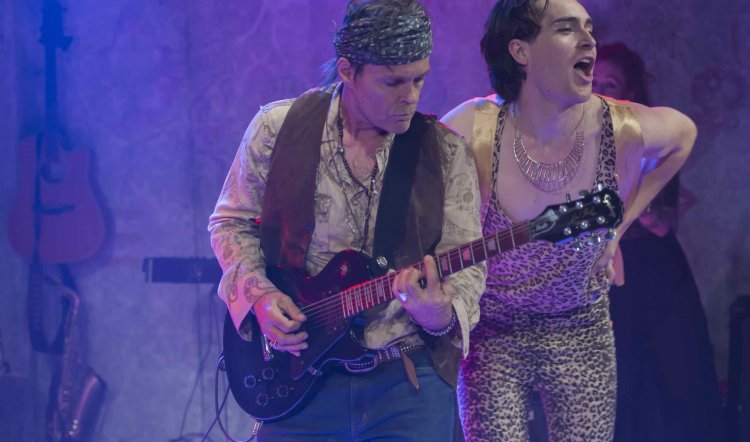 A RIFF ON KEEF: THE HUMAN MYTH

Keith Richards is a man to whom the tags legend and enigma may be attached without hyperbole. At 71, the co-founder (with Mick Jagger) of the Rolling Stones is a 20th century rock god. And given that it’s now 2016 and, against all the odds, he’s still with us, you’d have to say his influence and presence are 21st century too.

Benito Di Fonzo seems to think so and has written a 90 minute “riff on Keef” that takes in all the major milestones of his musical life – often in his own articulate, oddly posh and baroque language, in anecdotes taken straight from the 2010 autobiography Life: Keith Richards. And it’s the words (which could do with some editing, but no matter) that make this compelling if rough-hewn portrait so vivid and true.

In Terry Serio, the playwright is blessed with the perfect actor-musician to play the role of the world’s most famous lead guitarist. There is a surprisingly effective physical resemblance – enhanced by mascara and a headband – and he is also as at ease in his own skin (despite the abuses heaped upon it) and with his instruments as the man he so effortlessly portrays. There is at once a twinkling mischief and laconic world weariness about Richards that’s captured by Serio which explains the man’s charm and charisma.

Although they’ve been at war for most of their long musical marriage, Jagger and Richards were and are the best of the Stones and the prancing, pouting frontman is often a feature of this version of the Richards story. Played mainly by Abe Mitchell with snake hips and attitude, and in the closing scenes by Dorje Swallow, Mick petulantly prances while Keef looks on indulgently. Richards never wanted that degree of limelight. For him the music was everything.

And that’s where A Riff on Keef  runs headlong into its main problem: copyright restrictions on the Stones’ songs (and the astronomical sums demanded to use any part of them) mean that we get no Satisfaction  other than the tantalising pleasures of Serio’s mean blues guitar. Jack Flash  does not jump and the realisation kicks in quickly that you most definitely Can’t Always Get What You Want. It’s an insurmountable frustration. 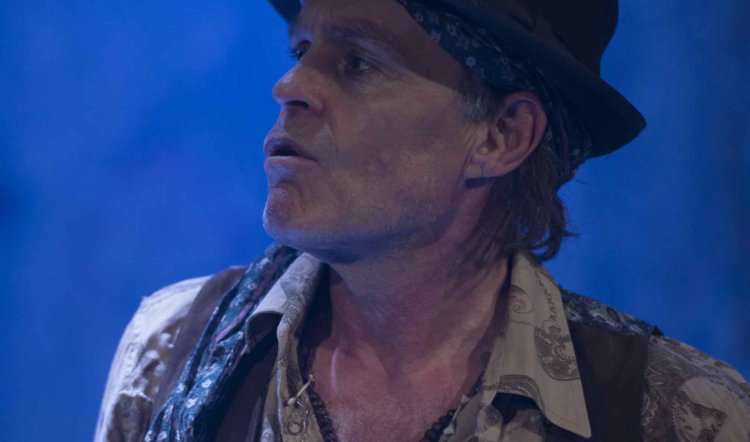 Nevertheless, with Branden Christine (bass, back up and sundry odd bods) and Lenore Munro (Marianne Faithfull, back up and sundry other odd bods) filling out the cast of five, under director Lucinda Gleeson, they bring to hazy and often comical life the drug-fuelled careers of Dartford’s two famous sons. A Riff on Keef  runs for about 90 minutes and, as with many new and untried works, could comfortably be cut to 75 or 80 when it wordily sags in the middle.

In keeping with the shambolic tale, Hugh O’Connor’s set features a hand-driven revolve (!) and he costumes the players with appropriate attention to scarves and impossibly tight pants. Sian James Holland’s lighting design underlines that 2015 is her breakthrough year and Katelyn Shaw’s sound is equally excellent in making a rock soundtrack workable in the tiny auditorium.

Stones and Keith fans of all ages (17 to 70+) will enjoy Terry Serio’s spookily accurate portrayal of the man, and the rough edges and general wonkiness of the show aren’t really out of place. Nevertheless, it could and should sharpen up considerably as it settles into its groove and is enjoyable for its rarity. However, to ensure its deserved audience, as well as some editing, what Benito really needs to address is the title: it’s a stinker and about as logical and memorable as yesterday’s gear.