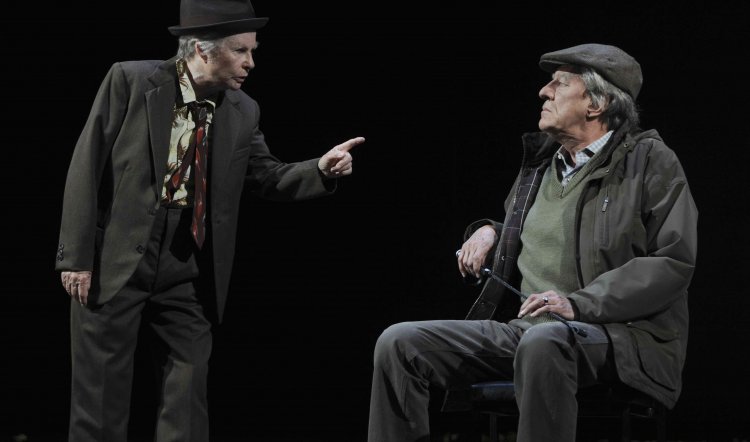 The eagerly-anticipated return to the Sydney Theatre Company of long-time friends and collaborators, legendary director Neil Armfield and “Academy Award winner” Geoffrey Rush, has generated an avalanche of jovial publicity that’s had more of the Morecambe and Wise about it than anything deeper. So the opening scene of this new King Lear  is both disconcerting and thrilling and not indicative of the almost vaudeville knock-about that weirdly characterises most of the production.

To begin…Looming out of the cavernous dark in a coup de theatre at first puzzling, then startling, then funny, then unnerving, Robyn Nevin as the Fool begins this production. She claims the moment, claims the stage and is unsurpassed from that instant on. It’s both a triumph and a disaster because the next three hours are often visually and dramatically anticlimactic.

Ironically, in a program interview with “the legendary” Nevin she addresses two elements of the production that either work or do not: “I’m not a natural comic,” she says – all evidence to the contrary over the past three-plus decades – and then turns on a bitterly, sadly, heartrendingly comic performance as the King’s loyal confidant, wise counsel and punchbag.

Later Nevin also says, “…that was always my goal in directing – to make the play clear…I want an audience to receive the text very clearly so they can simply sit in the experience of it without having to work out the meaning.” I wish.

If King Lear  is to grab the hearts and minds of its audience it is essential that the aged monarch’s heedlessly cruel demand of his three daughters – that they tell him how much they love him in return for their inheritance – is believable rather than merely silly. In the person of Geoffrey Rush, the master of rubber-limbed comedy, the almost crushing gravitas of the demand is missing from the get-go. Awful thought: this is miscasting on a grand scale.

Casting is that 90% perspiration that makes the 10% inspiration fly and there are some peculiar choices on the bare black stage (Robert Cousins, design, Nick Schlieper, lighting). The women have the best of it. As well as the remarkable Robyn Nevin: against the odds Eryn Jean Norvill is a fine, touching Cordelia while Helen Buday (Goneril) and Helen Thomson (Regan) can both bring cracked bitchiness to a credible rolling simmer without boiling over into parody. 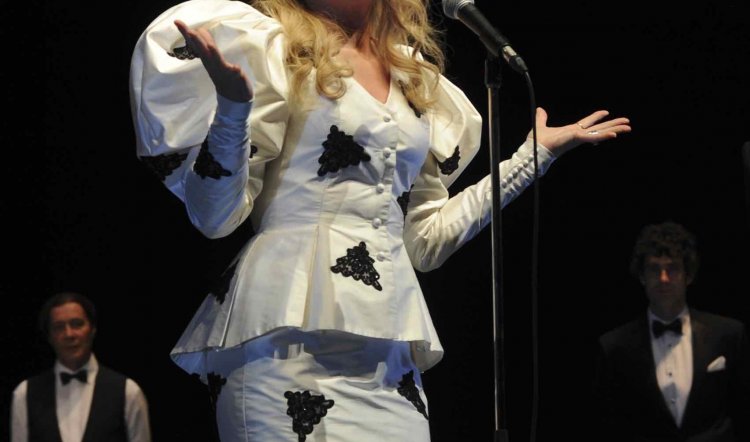 Alan Dukes is invisible and ineffectual as Albany; while as Gloucester, Max Cullen’s wayward handling of lines is as hair-raising as a high-wire walker in a gale. Meyne Wyatt’s scheming Edmund is given the Olde Tyme Hackney Empire treatment, making Regan and Goneril’s unseemly desire for him unlikely. Jacek Koman (Kent) does his best against the odds and uphill.

Mark Leonard Winter takes best in show for his touching Edgar, son of Gloucester, and his descent into the madness of Poor Tom is neither helped nor hindered by an extended period of nakedness, adorned only by a few gold streamers. As this part of the play is most notable for torrential rain and a quite fierce wind machine it’s likely that many will be distracted into worrying about his health in the coming weeks (as well of those wearing rain coats and plastic ponchos but clearly becoming steadily more sodden as the minutes tick by).

Aside from the weather, this is a very English-looking royal court: elegant evening wear with traditional (not bogan) bow ties for the men and outré Princess Beatrice gowns for the bad sisters. Once outside the look changes to the subdued heather and greens of Barbour jackets, corduroy trizers and tweed. The Fool’s misshapen bookie's suit is a class statement all of its own and Alice Babidge clearly had sly fun devising these fashion statements.

In the second act (the first is an hour and 45 minutes) the black void is replaced by a dazzling white and misty cyclorama. There are no horizons, no visible entrances or exits. It is not a human, earthly place – simply ethereally beautiful and sad. Unfortunately there is little by way of emotion to complement or fill this space as the murders and betrayals gather speed towards the end.

Nothing that has gone before has prepared the ground for the seeds of tragedy, so it does not take root or grow. King Lear  without sorrow or tears is another kind of void. Profoundly disappointing.