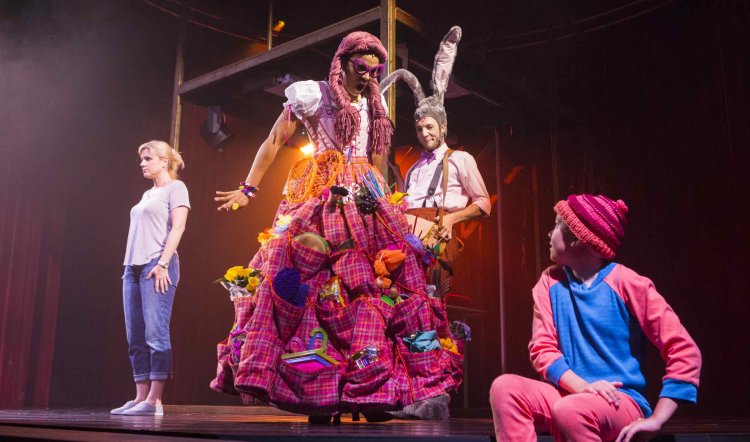 Masquerade is a long out-of-print children’s book that has achieved mythic status among those familiar with it, and is a bewilderment for those who aren’t. It concerns the whimsical adventures of Jack Hare (Nathan O’Keefe), a well-meaning but not brilliant fellow with very long, loppy ears. He’s given the task by his mistress the Moon (Kate Cheel) of delivering a beautiful jewelled amulet to the Sun (Mikelangelo) as a token of her love.

Because of the well known nature of day and night, Jack has just 12 hours to do it. And of course, somewhere along the way, in between being waylaid by all sorts of obstacular types, he loses the amulet. Disaster.

Back in 1979, the publication of Kit Williams’s book was a sensation because of the lavishly decorated pages - filled with his own mysteriously beautiful illustrations - and also because he actually made the amulet (a stylised golden hare embellished with precious gems) and hid it somewhere in the English countryside. Riddles and clues were given to the public and the quest to find the hare became front page news.

A little Australian kid, Kate Mulvany, was one of tens of thousands around the world who were bewitched by the book. In her case, for very particular reasons. You may have read about it in the past few weeks, unless you’ve been out of the country or asleep.

Now grown up and one of our most admired actors and playwrights, her own quest, for her own version of the lost amulet, was a wish to make the book into a stage work. Against odds that would have defeated anyone other than a girl who has survived and triumphed over impossible odds, Mulvany has now adapted Masquerade, for the stage via a series of hurdles and hindrances almost as complex and unlikely as Jack Hare’s.

Masquerade reached its opening night carrying enough pre-publicity and hype to sink a lesser work on the shoals of impossible expectations. That it didn’t happen is partially due to the most exacting condition imposed on the playwright by the author: that she include a version of her own childhood story in the play.

The reason Mulvany was first captivated by the book was because her childhood was blighted by cancer and the traumatic medical treatments and hospitalisation that were its accompaniment. Weeks and months enduring painful procedures and drugs, the agony of the illness and the varying degrees of sickness were somewhat mitigated by Masquerade - into whose surreal pages the ailing child disappeared for time out.

In this new play with music, the child is Joe (played alternately by Jack Andrew and Louis Fontaine) a boy whose despairing mother Tessa (Helen Dallimore) is facing the reality no mother should ever have to contemplate: watching her child suffer and, possibly, die. What saves them is the book as it comes to life around Joe’s hospital isolation room. 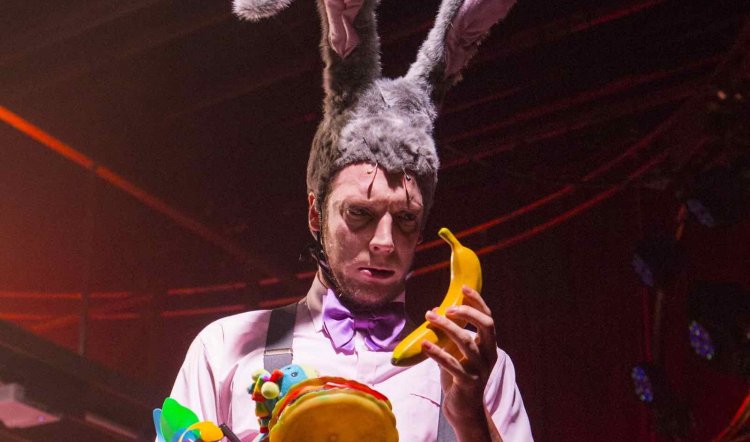 These parallel journeys - of the real child and the fictional hare - do two things: the strength of the child’s story shores up and bolsters the book’s visual treasury and otherwise wafer-thin narrative, while the droll Hare and his fanciful misfortunes make bearable what might otherwise be an impossibly bleak account of what happened to young Kate/Joe. And the two tales - unlikely knitted together - make a much stronger and more powerful dramatic whole.

What is truly fabulous - as witnessed on the Sydney Festival opening night - is how utterly enthralled are younger members of the audience (I was surrounded by children of all ages). The book’s quirky eccentricity - embodied by Zindzi Okenyo as variously, Fat Nurse, Penny Pockets, Dawn, Fish and (most notably!) Fat Pig - intricately woven with hard, hard reality as Joe endures his fear and pain - makes for an unpatronising and serious-minded theatre rarely offered to children.

Yet Masquerade also features a wildly farting oncology nurse, Sir Isaac Newton and gravity (Pip Branson) a barber shop quartet (Guy Freer, Sam Martin and Phil Moriarty - yes, okay, go and see it to find out why it’s a trio) and the kind of scintillating plays on language that kids from 9 to 90 find irresistible.

Also adding to the richness are music and songs by Pip Branson and Mikelangelo, played on-stage across a range of instruments and styles with one at least - Tessa’s Dream song - passing the “Frozen” test of having small girls humming it as they sat in their cubicles in the ladies’ loos after the show.

Directed with finesse and imagination by Lee Lewis and Sam Strong on an equally imaginative and economical revolving multilevel set by Anna Cordingley (who also dreamed up the costumes and had to take into account the upcoming national festival tour); with the all-important complex but nonchalant lighting by Geoff Cobham, Masquerade is alchemy in action. As a winsome fantasy it is fantastical and as a clear-eyed rendering of the real world of childhood it is moving and honest.

PS - Masquerade can still be purchased quite reasonably at abebooks.com.