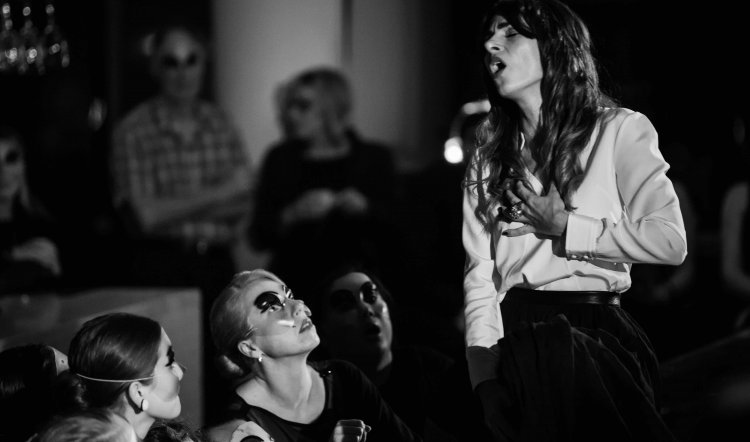 On an autumn evening with the steps leading up to the Art Gallery of NSW’s portico wet with recent rain, a small crowd politely mills about, waiting for instructions or for something to happen. It slowly becomes clear that everyone needs a purple wristband and a program, a quiet queue forms. Possession of these two items brings calm and subdued snatches of conversation.

A troupe of young men and women in sleeveless black cocktail frocks emerge from the Gallery and make their way through the throng to the foot of the steps. A gleaming black car with black windows draws up. Orfeo (Silvia Colloca) emerges from it, her eyes and half her expressive face are obscured by movie star shades. The demeanour of the tall, simply dressed figure is of deep, scarcely bearable pain. She is helped towards the doors by the frivolously-clad but compassionately watchful attendants.

The crowd parts, hushed, attentive, for all the world as if, with the arrival of the chief mourner, the funeral can begin. The attendants gently usher the audience/mourners into the Gallery’s domed entrance hall where its shape and size take on a beautiful new meaning as it resonates with the sound of a choir and orchestra and the soaring opening of Gluck’s Orfeo ed Euridice. And there, in the centre of the sound and the silent assembly, surrounded by masses of red roses and white lilies, is the object of all sadness, Orfeo’s love, the beautiful Euridice (Catherine Bouchier).

Attendants offer tiny gold-flamed “candles” to mourners and they reflect the golden gown in which Euridice lies in state, a single red rose in her dead hand. They also offer empathic embraces to some - it’s moot as to whether it is we or they who need the warmth of the sweetly unselfconscious comfort of strangers.

The chorus’s appeal to Euridice’s wandering ghost to hear the lamentations of her lover rises into the dome (conductor Luke Spicer’s sure hand), and as Orfeo begs to be left alone with her sorrow, the audience is surrounded by music and voices and contemplation of the flowers and their meaning. There are voluptuous red roses - signifying blood, passion, rebirth; and austere white lilies - for purity and death; the floral design, by Dr Lisa Cooper, is integral to the opening scene as its sculptural form cradles Euridice.

Orfeo’s despair is gloriously realised by Colloca whose rich yet pure and powerful mezzo soprano and dramatic acting range are ideally suited to the decision to make Orfeo an ambiguous and androgynous figure. She projects all the strengths of masculine and feminine and unabashed emotion in the early scenes making the tragedy quickly tangible, so the sudden appearance of Amore (Stacey Alleaume) is both sleight of hand and a lighting of the dark. Her twinkling fairy light crown and absurd Tinkerbell frock hint at optimism and her bright, true soprano tells Orfeo there is hope, her suffering will not last - “Gli sguardi trattieni”.

Amore tells Orfeo - go to the Underworld, survive the journey, the Furies and the quest and you can bring back Euridice from the dead. So of course, off we go, winding behind her through the 19th century galleries with their vast lugubrious canvases so loved by the Victorians: death, gloom, disaster and some Orientalism for spice. There is also music: a six woman choir conducted by Chris Hillier slips in another Gluck chorus from Iphegenie seemingly underlining the passage of time from the 1700s.

Then a cup of tangy mysterious punch and a surprising amuse bouche finds the gathering in Hell. However, it’s actually Matt Moran’s restaurant within the gallery and food is offered, so the concept of Heaven and Hell are, as ever, very close. The space is cleared for the evening and mysteriously lit (designer Verity Hampson has seriously had her way with the Gallery and its various chambers, as has set designer Elizabeth Gadsby and costume designer Aje). 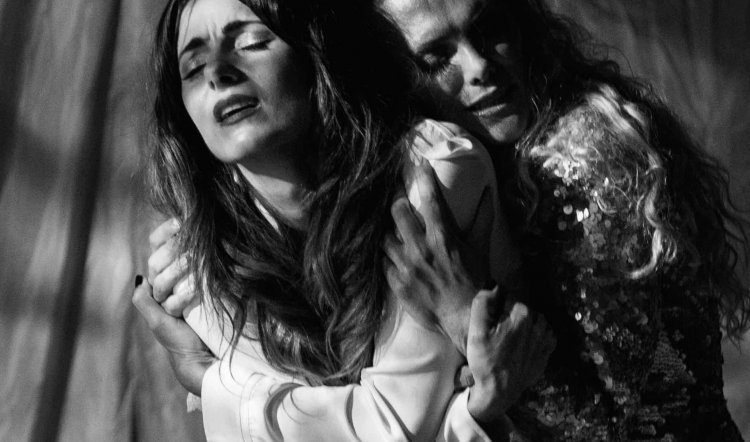 The attendants are now disquietingly masked and each mourner is offered a half mask to wear. Anyone who’s donned a mask knows how transformative and transgressive is that experience. What we do when we’re unrecognisable but in plain view can be startling; the effect is thrilling and disturbing.

The deliberately stately elegance of Gluck’s music contrasts vividly with the emotion and drama of the libretto and Orfeo’s journey. The black-frocked attendants - who’ve been contravening the rules of polite society in ways reminiscent of Fellini - reappear in fragile white shifts that nevertheless hint at decay rather than innocence, their every move choreographed by Sam Chester.

Director Shannon Murphy has combined a strict budget and lavish imagination (white feathers caught in the updraft of floor fans to signify life and hope, hello Julie Taymor) to bring to life one of the most beautiful of the early operas. She cleverly utilises not only the unwitting volunteers/audience and chorus/dancers but also the various areas of the Art Gallery to make a real and often bewildering journey.

The final scenes, when Euridice has been freed from death and they are trekking out of the Underworld, take place in the usually unremarkable main concourse of the Gallery. It’s transformed with cloud-like hangings into an intimate theatre where the mourners/audience can sit and savour some of Gluck’s most famous melodies. Euridice plaintively begs Orfeo to at least look at her, and she cannot of course, as to do so condemns them to the Underworld forever, but the interplay between the two voices is sublime.

It’s a reminder that although Orfeo is known as the first of the composer’s influential and pioneering “reform” operas, the other remarkable thing about it (albeit rarely remarked upon) is the musical construction of the piece. Unlike many in the canon, more often performed and more highly regarded, Orfeo ed Euridice is particularly satisfying for an audience because its memorable arias are not confined to the first half. And one can be musically snobbish and curl the lip, but the drama is served by Euridice lately lamenting “Che fiero momento…” when she believes Orfeo is faithless and then, when he has fatally looked back, Orfeo launches into her glorious aria of loss and longing, “Che farò senza Euridice?”

And as if that’s not enough to send all out into the night humming and happy, Amore puts a stop to the tragedy and true love is rewarded. Great music, a wonderful production and a happy ending. Phew.