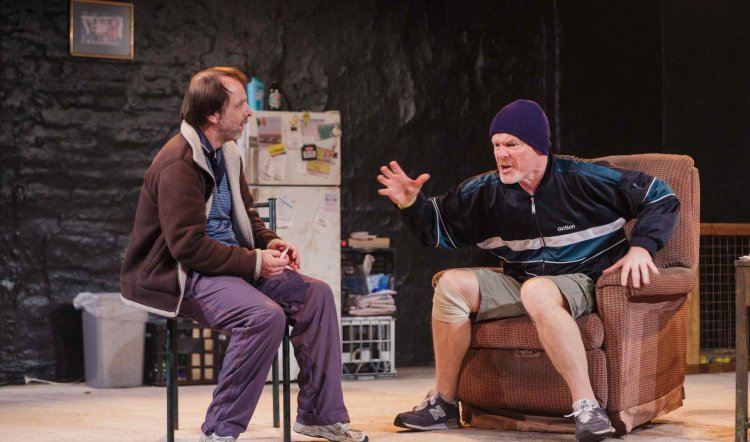 The ancient yet largely ignored sport of greyhound racing has recently made it into the news for the first time in decades (if not ever) but the reasons were dire. Extreme cruelty to living animals in the training of the dogs had been uncovered and then, if that were not enough, there was the grisly discovery in Queensland of dozens of greyhound corpses – killed and discarded because the dogs hadn’t made the racing grade. Recent revelations perhaps, but the nature of the evidence and stories told of a long and horrible history. And then there’s The Dapto Chaser.

Mary Rachel Brown was commissioned by Merrigong Theatre Company to write a play about the doggies back in the – relatively – innocent days of 2011. She immersed herself in the culture and world of breeding, training and racing that centres on the small NSW south coast town – now more a suburb of Wollongong. Nevertheless, while the traces remain of what was once a proud working class, it is now more a reliquary for broken dreams and long forgotten ambition; the working poor or the never-worked under class for whom neither this nor any recent federal government has had answers or a caring thought.

Greyhound racing somehow epitomises all that: beautiful, fragile, tough, misunderstood animals; owners and trainers who either love or brutalise them; a dwindling public that sees little beyond the small achievements and almost nothing of the snot-nosed skulduggery. It’s a bet and a beer and bugger the mutt that ran wide on the home turn. And the chimera of the big one – the race that might not stop the nation but could mean the difference between penury and a place in sun of the Gold Coast hinterland. And so, in The Dapto Chaser  (a chaser being an extremely fast dog in racing parlance btw), the playwright also mines a rich vein of humanity in her storyteling.

Errol Sinclair (Danny Adcock) is dying of lung cancer. A small oxygen tank hangs on the back of his armchair and he sucks desperately on the mask even while irascibly searching for his cigarette lighter. It’s debatable whether he’s more anxious to check the form guide, get his battered radio to pick up the races, light up a gasper; or have another piece of his elder son Jimmy (Jamie Oxenbould). Jimmy irritates the shit out of Errol because he’s caring, responsible and allergic to his father’s gambling habit. It’s ruined their lives and gentle Jimmy sees it lurking in his brother Cess (Richard Sydenham) even as he insists he won’t succumb and will make their fortune with his beloved young greyhound. 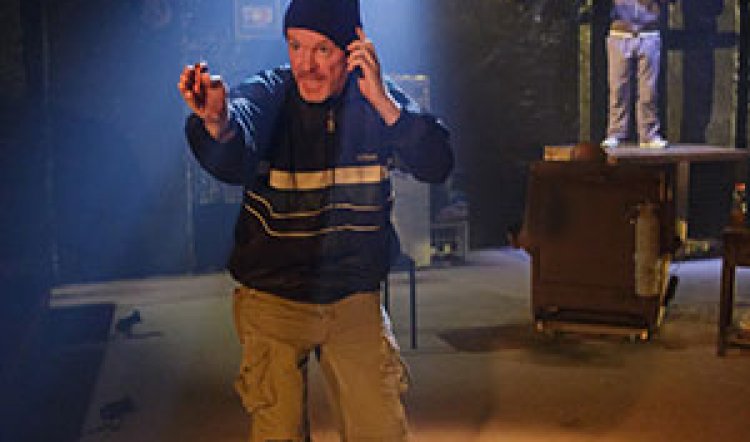 As well as the rough poverty of their lives – the brothers share a shabby rented hovel with their father and the dog – there is another blowie in the ointment in the form of Jimmy’s employer, dog track king and minor sleaze, Arnold Denny (Noel Hodda). There is an Arnold to be found wherever quick, easy and dodgy money is to be made and this one is a classic. Sporting a John Waters moustache and a head of the most unlikely auburn hair, Arnold’s affability is less than skin-deep; beneath the slick duds he’s as cuddly as a pit bull and much less trustworthy.

What happens over the course of 90 enthralling minutes is a luscious mix of ingredients that make a spicy, unexpected, twisting, turning narrative. The four characters are richly fashioned and the actors grab them with both hands and make the most of them. Jamie Oxenbould is always good but with the outwardly timid but inwardly stoic Jimmy he reaches levels he’s rarely given access to by lesser writing. Similarly Richard Sydenham’s tough physical appearance means he’s most often typecast as a thuggish lout, yet Cess is a man of tender sensibilities and Sydenham – released from commonly imposed limitations – is a revelation. Danny Adcock too is so good at playing the nasty it’s easy to overlook his ability to morph from that to a three-dimensional and heartfelt character. And Noel Hodda is so rarely seen on stage these days it’s just a pleasure to see him, even though he’s hilariously plausible as a low-rent colourful racing identity.

Director Glynn Nicholas steers the production with a light hand and, being an accomplished clown and mime in his own right, has also coached the actors in the art of training and handling an invisible greyhound – so much more effective than a fake or, god help us, real one. In realising the shabby-shambolic house and Lowes-end-of-line- sale clothing of the three Sinclairs (and Arnold’s sad, wide boy outfit) set and costume designer Georgia Hopkins has served them very well, with lighting designer Toby Knyvett adding an appropriately 40w poverty-level of lighting to the dwelling. All in all, The Dapto Chaser  is funny, rude, illuminating and a fine play that’s meaningful and extremely entertaining. Not to be missed.