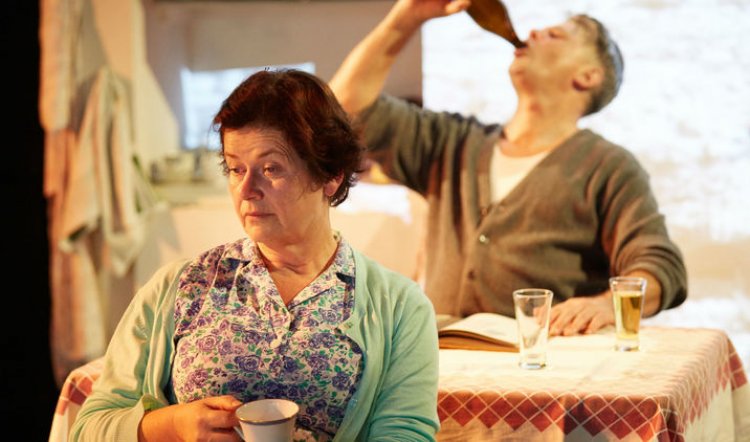 THE ONE DAY OF THE YEAR

THE ONE DAY OF THE YEAR, Defibrillator at the Finborough Theatre, 13 May-19 June 2015. Photos - above Fiona Press and Mark Little; right: James William Wright and Paul Haley.

There are many bitter-sweet ironies around this new production of Alan Seymour’s now 55-year-old play. It’s a shoestring staging involving much hard and ill-rewarded work by its gutsy cast and crew – perhaps befitting an era of economic austerity, with cuts to every social service and social good imaginable including the hi-jacking of $104m’s worth of Australia Council funding for the arts to create a new toy for the minister.

Ironic because, as directed by Wayne Harrison, The One Day of the Year  illuminates and clarifies elements of Australia’s recent history in ways that could not be realised by Tony Abbott’s $100 million “educational centre” at Villers-Brettoneux, which he says will “increase understanding of the Australian effort on the Western Front during World War I”.

Ironic because the play could be as offensive to “patriots” such as the prime minister as it was when it first shocked Adelaide in 1960. Ironic because although it’s set in that post-WW2 period, its ferociously honest reality shines as unsentimentally on today’s New-Jingoism and “celebrations” of Anzac and Gallipoli, as it did when it scandalised – and was rejected by – the Adelaide Festival.

Now half way through a season at one of London’s best-known fringe/independent pub theatres, The One Day of the Year  is trailing four and five star reviews from most of the city’s critics, and rightly so. Opening in the kitchen of a working class Aussie home and switching quickly to the pre-dawn of an Anzac Day, Alf (tremendous, powerful performance from Mark Little) is complaining bitterly and as usual about the ills of post-war Australia while puffing himself up like a prize bantam for his big day.

Like so many bigots and medal-sporting marchers then and now, Alf is a bit of a fraud but that doesn’t stop him pontificating endlessly. Meanwhile, he fails to notice that his old mate Wacka (Paul Haley – unselfish and intelligent performance), the real veteran at the table, says nothing as he stares his thousand yard stare. Dot (Fiona Press) notices, however, but she is caught in the middle – between her own frustration and limitations and the inkling of something else mattering, close by, but beyond her reach; in a performance that grows alongside Mark Little's.

The simmering unrest in the household boils over when Alf and Dot’s university student son Hughie (James William Wright) refuses, for the first time, to attend the Dawn Service with his dad. It’s then revealed that he and his new girlfriend Jan (Adele Querol) are working on an anti-Anzac story for the student paper Honi Soit  (which happened and was Seymour’s original inspiration for the play). 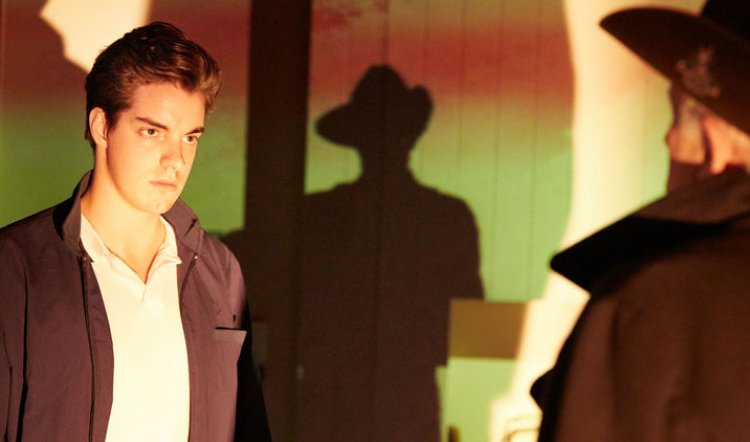 The One Day of the Year  is as much about class, family and Australia’s awakening from global isolation as it is about attitudes to war and peace. Jan is a blithely posh girl from the North Shore, Hughie is immersed in American pop culture even as his political instincts are being sharpened by education. The gulf between the generations is starkly yet tenderly rendered: Alf might be a dinosaur and Dot a silly woman, but Seymour portrays them with compassion and understanding. Across the kitchen table, Wacka emerges as the silent and tragic hero, his story revealed by unexpected and sweet means.

Wayne Harrison makes good use of the tricky Finborough space – ingenious set by Catherine Morgan, sound design by Chris Drohan – and the performances he draws from the actors are nuanced and generous. Fiona Press is at once Alf’s bolshie, grumpy foil and then later, the catalyst for Wacka’s unburdening.

As the smart young things of the new age of opportunity, Adele Querol and James Wright resist the easy route of caricature and are able to invest these two with pathos and proper likeability, even as they’re being obnoxiously clever and entitled.

The only uncertain note in a fine and now classic play is the newly installed final scene which brings it into the more recent past (Kabul). It was apparently based on notes left by Seymour but whether he intended such a sentimental post script on an otherwise uncompromisingly unsentimental work seems doubtful. Cute, however.