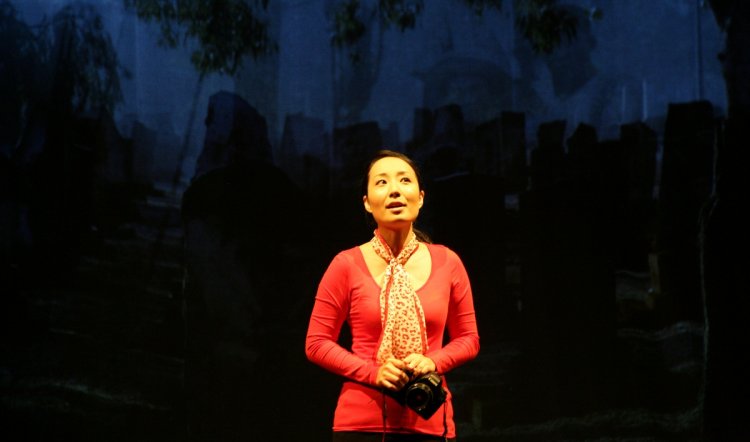 YASUKICHI MURAKAMI - THROUGH A DISTANT LENS

YASUKICHI MURAKAMI - THROUGH A DISTANT LENS, Performance 4A and Griffin Theatre Company at the SBQ Stables Theatre; 10-21 February 2015. Photography by Mayu Kanamori: above and right: Arisa Yura.

Australia’s modern times span little more than two centuries and are overflowing with the often hidden and invariably rich human stories of those who came here from other lives. The latest ghost to emerge from historical obscurity is Yasukichi Murakami, a second son who left Japan aboard the Saladin in 1897 to seek his fortune in Cossack – a dot on the map between Dampier and Port Hedland in Western Australia.

His story has recently been sought out and now told by Mayu Kanamori, a researcher and photographer who also emigrated – in 1981 – and, as she says in the show, – he came on a ship, I came on QF21. There are other differences too and they are explored in 70 minutes of drama-documentary, video-biography written by Kanamori. She is played by Arisa Yura and Kuni Hashimoto as something like Murakami’s ghost.

Most Japanese in Australia in the late 1800s and early 20th century were involved in the pearling industry and ancillary activities – including funerals, as equipment and conditions for pearl divers were shocking. Murakami first worked hauling water, then in a general store owned by Takazo Nishioka and his wife Eki. In 1900 they opened for business in Broome. They were tough and pragmatic times so, when Takazo died a year later, his worker and widow married and industriously expanded the business.

Somewhere along the line Eki acquired a camera and the skills to operate it and to develop and print photographs – activities unknown to the digital selfie generation. It was an essential of all frontier societies that nicely posed photos of the subject in Sunday best be sent home to reassure families of their well being and success. Rough, remote WA was no exception and the Murakamis’ poignant portraits were a source of regular income even as Yasukichi also took to photographing the buildings and activities of Broome.

However, Murakami fell on hard times, his wife returned to Japan with what cash she could find, he was bankrupted and she died soon afterwards. He married again to 23-year-old Shigeno Murata, Australian-born and known as Theresa; and life began again. In the years leading up to WW2 they had six sons and three daughters, Murakami invented a safer diving suit and was an innovator in the cultured pearl industry, but at the outbreak of war all Japanese in Australia were interned. Murakami died while incarcerated in 1944 and is buried in the Japanese cemetery in Cowra.

But as Mayu Kanamori found when she began to search for the man behind the photographs, there was much more to his story than the mere facts. Working in Australia mainly as a wedding photographer and exploring art and theatre projects more for her own satisfaction, Kanamori began an internal dialogue with a man for whom photography was primarily art. What she realised is that he also painstakingly documented the daily lives of those around him, and for reasons and in conventional ways similar to her own “bread and butter” work. 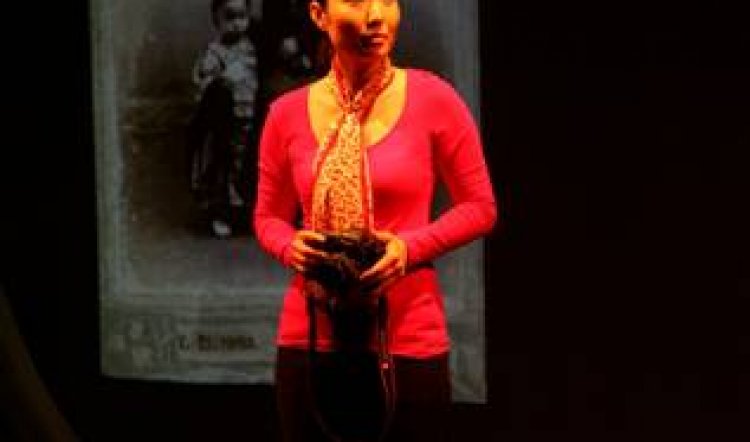 Kanamori’s twin themes of her search for Murakami and the way it led to her own search for meaning  are articulated through an engaging performance from Arisa Yura and the warm, twinkling presence of Kuni Hashimoto as her unwitting mentor. Composer and musician Terumi Narushima punctuates and colours the stories from the sidelines, spotlit as she plays a variety of traditional and contemporary Japanese instruments.

There are hints at another story hidden within this narrative as Eki appears briefly via animated photograph, played by Yumi Umiumare, and we are left wondering whether she was the power behind the lens (like ornithological artist Elizabeth Gould: forever in the shadow of her famous husband).

Sensitively lit by Luis Pampolha, the uncomplicated storytelling is complemented by Mic Gruchy’s visuals and video imagery. These are projected onto a canvas-like drape across the width of the Stables stage are a mix of the photography of both protagonists and simple Australian iconography – shimmering gum trees, in the main.

Although reticently and quite formally told, the writing and the actors bring life and warmth to these two lives and to a period and places in modern Australian history that are naturally dramatic and often tragic. All of these elements rise to the surface and make a compelling and always absorbing work that one suspects will result in further discoveries and revelations as more people – descendants of the photographer and his subjects – learn of it. Highly recommended.

Sexual Misconduct of the Middle Classes