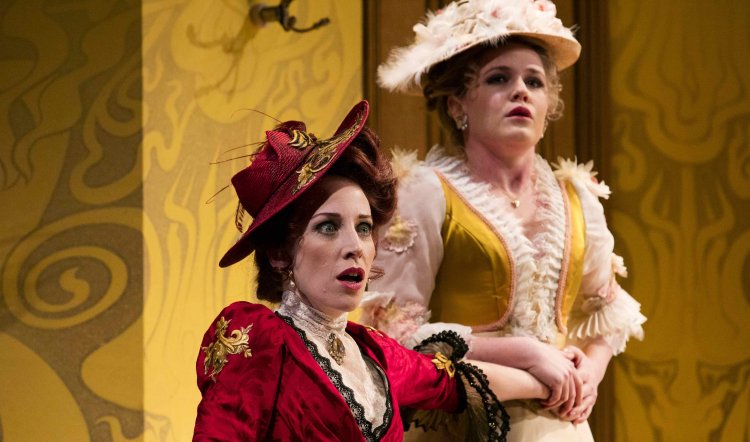 A FLEA IN HER EAR

A FLEA IN HER EAR, Sydney Theatre Company at the Drama Theatre, Sydney Opera House, 4 November-17 December 2016. Photography by Brett Boardman: above - Helen Christinson and Harriet Dyer; below - Justin Smith and David Woods; below again - Kelly Paterniti and Harry Greenwood

When the lights in a theatre go down for a foray into the world of farce it’s the signal to illicitly enjoy ourselves: giggle at the unacceptable, groan at the improbable, chortle at the non-PC and guffaw at the taboos. A directive should perhaps hang above the auditorium doors: Suspend disbelief, forget the outside world and revel in absurdity and mayhem. What’s not to love?

Georges Feydeau (1862-1921) was a master of farce and French farce was the era’s highpoint of the ancient form. To participate as an audience in poking fun at the bourgeoisie, petty authority and social hypocrisy was an extremely popular pastime, and once translated into English, was equally popular across the Channel.

A Flea In Her Ear was one of Feydeau’s masterpieces and has been regularly restaged, re-translated and adapted over the past century. Most notably, John (Rumpole) Mortimer’s translation of 1966 was employed again in 2010 in London. One of its comic highlights is the seedy hotel/brothel of the original becoming “The Frisky Puss Hotel” on the “Avenue Coq d’Or”. No wonder Mrs Slocombe and her wayward pussy remain iconic images in English language comedy.

There is something comfortingly familiar about such jubilantly unsubtle vulgarity: we’re instantly back to childhood when any mention of bum, wee, willies and boobs guaranteed hysterical joy. And when such humour is wrapped up in plots of ridiculous complexity, with pratfalls, narrowly missed disasters and the audience always one step ahead of the onstage characters, a play such as A Flea In Her Ear is a guaranteed crowd-pleaser.

There is nevertheless a subtle difference between unsubtle vulgarity and plain old wince-inducing vulgarity and it’s evident in this version of the play. The new translation for this production is by Julie Rose, eminent and awarding-winning translator of many things French – Racine, Moliere and Hugo as well as the STC’s recent production of Genet’s The Maids, among much else. In this instance, however, A Flea In Her Ear has seen been adapted, ockerised, dirtied up, whatever, by Andrew Upton.

Now, in place of the traditions of whimsical roguishness and bawdy charm there are unnerving flashes of misogyny and old fashioned sexist aggression. For instance, the substitution of Frisky Puss – which has now become Snatch Time – exemplifies innuendo at its most disquieting. One can hear the aggrieved claim of sensitive blokes that the phrase is obviously meant as a play on rent-by-the-hour and only a humourless (and grubby-minded?) feminist would see “snatch” in its common and unpleasantly onomatopoeic meaning. 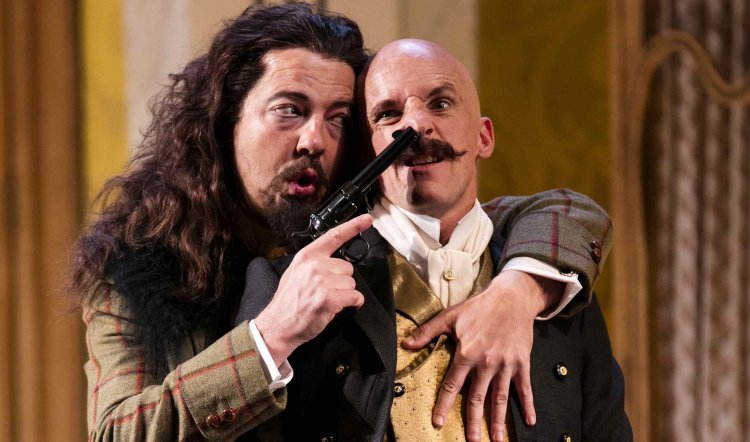 However...although the first half struggles to get off the ground for reasons of plot establishment and the above unfunniness, the second half is a riot. In essence, A Flea In Her Ear takes aim at the petit bourgeois of Paris with Raymonde Chandebise (Harriet Dyer) in conniptions over her suspicion that insurance executive husband Victor Emmanuel (David Woods) is having an affair. Her reasoning is flawless: he is no longer interested in her dans la chambre.

Her BFF Lucienne (Helen Christinson) has a bright idea: write a letter on perfumed paper inviting him to meet an anonymous admirer at a shady joint for an afternoon tryst. More flawless reasoning so of course Raymonde agrees. Meanwhile (everything is meanwhile, perfect timing being what it is) Victor Emmanuel’s nephew and clerk Camille (Harry Greenwood) is wrestling with a silver prosthetic palate – his own is cleft, he is unintelligible without the artificial insert – and the heated attentions of parlour maid Antoinette (Kelly Paterniti).

Meanwhile again...the butler Etienne (Leon Ford) commits an unthinkable faux pas by sitting in the presence of his betters while engaged in conversation. He’s also the catalyst for the prominent placement on a table of the equivalent of Chekhov’s gun: a glass of Victor Emmanuel’s own urine. Because, of course, meanwhile, Victor Emmanuel has consulted Dr Finache (Sean O’Shea) as to why he can no longer, ahem, accomplir ses obligations matrimoniales and the doc has requested the sample for testing.

Meanwhile, unfortunately for the players, and absolutely essentially for the hilarity of the second half, two things happen. First, Victor Emmanuel doesn’t want a dalliance with a perfumed letter writer and anyway decides it must really be meant for his debonair friend Marcel (Tim Walter) and second, he shows the letter to Antoinette’s jealous Spanish husband Carlos Homenides de Histangua (Justin Smith). Carlos etc instantly recognises his wife’s hand writing and roars off with murder in his eye.

The second half takes place in the house of ill repute and this involves much eye-catching twirling of Gabriela Tylesova’s gorgeous Art Nouveau set (and costumes). Adding to the fun and ingenuity is some character doubling: Justin Smith hobbles about as hotelier August when not quick-changing back to pistol-toting Latin outrage. Leon Ford is also Olympe, August’s statuesque wife and maitresse d’. And Sean O’Shea becomes August’s useless brother Baptiste whose main function is to pretend serious illness.

Meanwhile, crucially for the plot, it turns out that Victor Emmanuel and the bumbling hotel porter Poche look uncannily alike. This isn't a surprise to the audience as they are both David Woods, but what might be interesting is to wonder whether Poche is the character from whom John Cleese created Manuel. 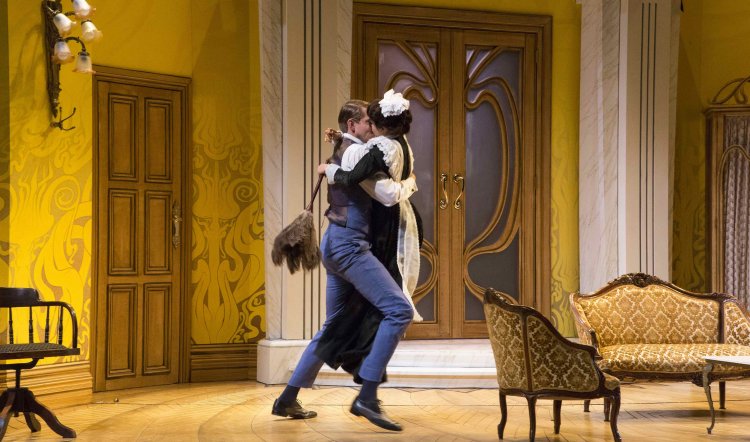 As well as the misunderstandings there is more: a disappearing bed, a pair of therapeutic trouser braces, more mistaken identity than can be quickly described and the kind of door-slamming, stair-leaping, somersaulting, double taking physical inventiveness we last saw from the brilliant Josh McConville in Noises Off.

The company is – of necessity – always teetering on the knife-edge of disaster which only makes it funnier. Some set-ups, moments and bits of business are milked a little too hard and for too long, probably because director Simon Phillips just loves this kind of barely controlled havoc, but in the main the actors are exhaustingly splendid.

Harriet Dyer’s mannered drawl and Justin Smith’s splenetic Castilian lisp are the icing on the cakes of their perfectly judged performances (Charmian Gradwell voice and text coach). Leon Ford is elegantly melancholic as one-time tart, now semi-respectable hotelier Olympe. Helen Christinson’s astute comic timing lends much to the BFF-ness of her relationship with Raymonde, while Kelly Paterniti’s saucy first half maid is the other side of the coin to her second half simple Eugenie. Being upstaged by a prosthetic mouth piece doesn’t faze Harry Greenwood one bit and Sean O’Shea switches between plague-ridden layabout and suave medico with suspicious ease. Tim Walter’s chancer Marcel, meanwhile, is a cad and a bounder; enough said.

Those of a nervous disposition ought to know there is an R-rated scene involving the pervert in Room 7 and also that Chekhov’s dictum re guns (and pee) are adhered to. The longueurs evident in act one and, to an extent, in act two will probably diminish as time and familiarity fine tunes the comedy chaos. These actors deserve all the acclaim at the end of the night and, with the reservations already described, this is a firecracker show.