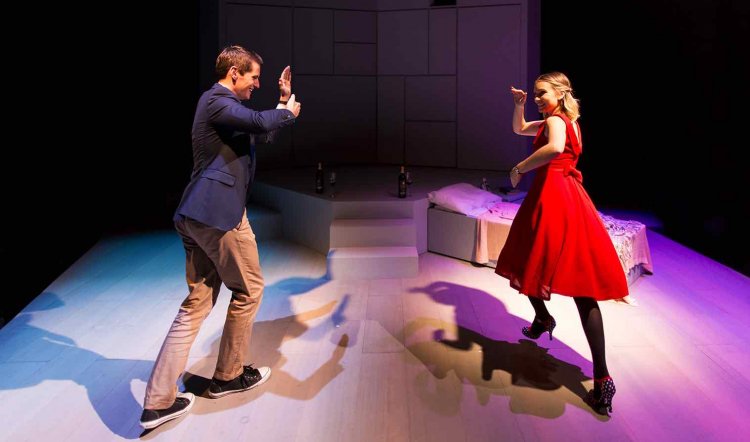 A HISTORY OF FALLING THINGS

Thirty-something Brit playwright James Graham wrote this deliciously odd comedy-weepy about two keraunothetophobes in 2009. If you think keraunothetophobia – the fear of falling things, particularly satellites and other space junk – is an unusual subject to choose, consider some of the work he’s gone on to write since then...

Among others there’s The Vote, set in a polling station on election night 2015 and broadcast live that night on TV; The Angry Brigade – about the ’70s tea and toast UK version of the deadlier Euro-anarcho-terrorists of the time, and This House, focusing on that house of Westminster during the years when the major players were Ted Heath, James Callaghan, Harold Wilson and Margaret Thatcher – who are not seen in the play and whose characters are the (un)supporting players of the day: backbenchers, whips and so on. In other words, James Graham is a really interesting playwright and it’s good to see one of his on a Sydney stage.

Directed with the lightest but surest hand by Nicole Buffoni, A History of Falling Things tells of the unlikely romance between Robin (Eric Beecroft) and Jacqui (Sophie Hensser). They meet online and then move to the next level – a webcam – because neither can leave their homes because of the mortal fear of something falling from above and hitting them. Yes, really – it’s an actual thing.

Robin spends his days under a table in his bedroom while Jacqui is slightly less constrained. More importantly, she actively wants to recover and get on with her life even though the roots of her trauma are, on the face of it, much worse and more understandable than his. His widowed mother Lesley (Merridy Eastman) never gives up hope and never shuts up either, her stream of consciousness nervous chatter providing an endless soundtrack to their lives.

A few streets away, Jacqui’s father Reece (Brian Meegan) is a simple and loving dad whose own difficulties – a wife who walked out several times before leaving for good – are only compounded by what’s happened to his daughter.

And the go-between – literally – for these space junk-crossed lovers is a motorcycle courier Jimmy (Sam O’Sullivan). At first exasperated, he finally enters into the spirit of things in conveying packages between the two, culminating in the biggest delivery of all, but that would be telling.

A History of Falling Things is charming and unexpectedly informative – you wouldn’t believe how often things that shouldn’t be up there fall from the sky and how often it’s been recorded in history – and it’s a rollercoaster of funny and touching. Expect to reach for a tissue when you least expect it. 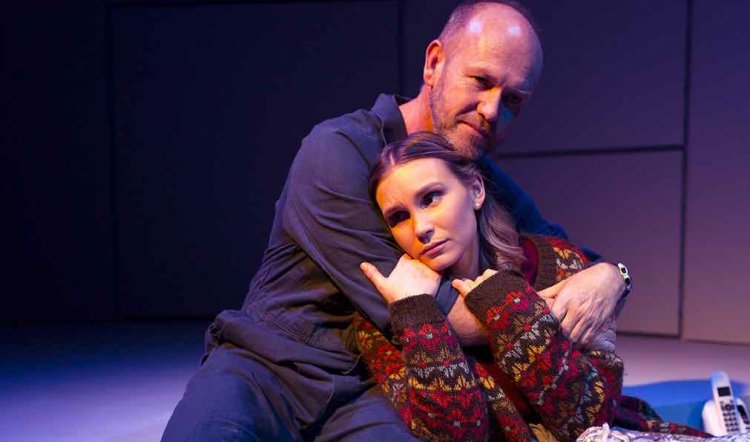 The cast is beautifully chosen: Merridy Eastman is one of our finest comic actresses and it’s crazy that this is her first stage role in twelve years. She finds the humour and pathos in the tiniest moments and is simply wonderful: a small comedy master class. Brian Meegan is also under-rated and often stereotyped as the bloke. Here he brings out a depth and sweet sadness in the role as well as the boofy laughs.

Eric Beecroft and Sophie Hensser are never off-stage and both are strong in their very different characters. Robin is almost beyond redemption – until true love comes calling – and even then you wonder, but he maintains the balance between pathetically irritating and absurdly charming with a delicate touch.

Sophie Hensser is a revelation (although not for those who watch Channel 9 on Monday nights). Her ear for the soft end of the mid-Thames accent is key to her suburban girl (dialect coach Nick Curnow) and she is credible, funny, tender and hard-headed by turn: exceptional.

The small yet vital role of the courier is played and cast with equal care: Sam O’Sullivan is a fine actor anyway and brings Jimmy to 3-D life. Not three-dimensional but a delicious part of the production is the AV design by Tim Hope: not only rain, but frogs, blood and even a large rock fall from the sky through the magic of light and Alistair Wallace’s sound design. The all white set is a bit of a puzzle on occasion but works in the main (Anna Gardiner), aided by Christopher Page's lighting. And all in all, the production makes 90 minutes float by like the red balloons released in one lump-in-throat moment.

A winter warmer for the cockles of your heart, with laughter and tears, amazing revelations and five delightful performances. Recommended.