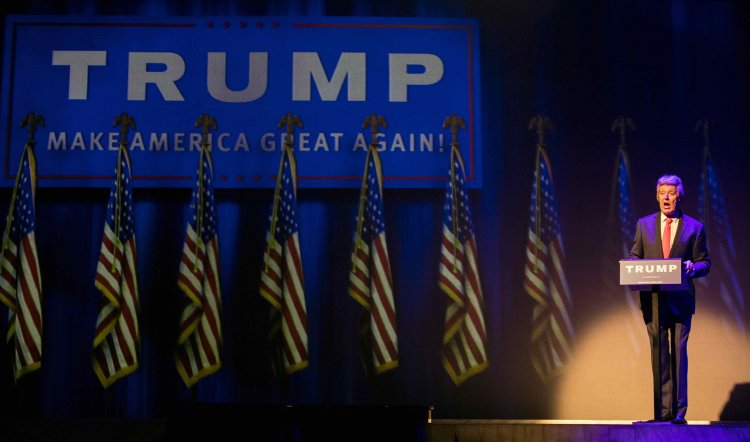 BACK TO BITE YOU – THE WHARF REVUE

When a US army hombre who looks uncannily like Jonathan Biggins ambles on stage and introduces himself as “General Dick Tingle” you know it’s Wharf Revue time again; and it’s time for Christmas, lots of laughs, excruciating jokes and acidic satire. But we’re getting ahead of ourselves...

Back To Bite You – this year’s iteration of the long-established Biggins-Phil Scott-Drew Forsythe travelling circus  signals its intent in the title. It’s frequently dark, sophisticated and, as well as being awfully clever, is also totally idiotic and hilarious. And when they dare a sincere tribute to late comrade Bob Ellis, it is an unexpectedly lovely and poignant thing.

The night begins however, with an unusually lengthy and involved visit to Ancient Rome. There – prowling beneath the velatium, skulking around the basilica, or the balteus of the cavea, or the cella, we find not the man in the vicus, but a band of Ghastlys such as Corius Bernardis, Clueless Katteris, the Tyrant of Wentworth, Antonius Abbottus, Pompous Brandis, Lambius the Unwashed, Pauline Hansonus and Foreign Minister Julianna of the Vacillating Virgins. What happens within this Templum is both sharply topical, ridiculously funny and sadly believable.

There is a definite international influence in Back To Bite You that doesn’t stop at the Roman Empire. It includes a brief satellite message from the absent, jet-setting Julia Gillard (Amanda Bishop) and a high spot in a night of highs from Phil Scott with a solo turn at the grand piano with the “Terrorism Song”. It pulls no punches and is a spectacular show of the team’s G&S-standard lyrics and Scott’s musicianship.

Jonathan Biggins pulls off a truly amazing feat of tongue-twisting and memory as Dick Tingle in explaining the Middle East and its history in approximately three dazzling minutes. Drew Forsythe’s mimicry is at its best with a lugubrious and unmistakable Eric Abetz and wonderfully controlled Pauline Hanson. And how better to deal with the Brits' and their Brexit than to turn it into the one gruesome thing it truly resembles: the old Carry On films complete with a wildly bosomed Hattie Jacques and pert Barbara Windsor.

On opening night at Wharf 1 (after 40+ out-of-town try-outs) the current cast member with lady parts, Katrina Retallick, was sadly absent and unwell. Paige Gardiner filled in womanfully, tunefully and credibly as, among others, Jacquie Lambie and Julie Bishop.

Aside from the grand piano, this year’s Revue is effectively staged via projected backdrops and video clips (lighting: Matthew Marshall, sound and video design: David Bergman, video artist: Todd Decker). Also integral – because of the preponderance of togas and multi-gendered pollie-wear – are costume designers Scott Fisher and Nick Godlee; and wig stylist Margaret Aston. Without them the show would go on but would be much more sensible and sadly less silly.

As it is, Back To Bite You winds up in a brilliant finale that is both bleak, be-wigged and bewildering. It features – with more prescience than even this team could have imagined – the Clinton-Trump War of Words 2016. It’s wildly funny, but of course it’s not. Let’s hope there’s a world left to satirise in 2017. Meanwhile, Scott, Forsythe and Biggins have done it again. And the Wharf 1 season is pretty well sold out already.