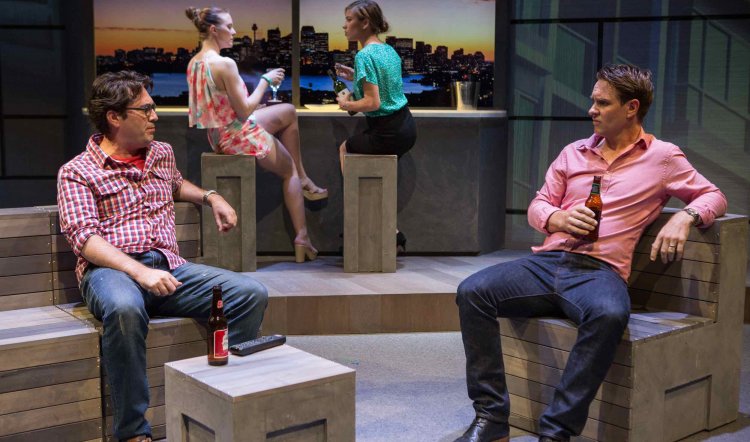 This is David Williamson’s 50th stage play and the season is heavily sold already: so get your tickets before word-of-mouth takes care of the rest, The Master has done it again. In short, Jack of Hearts is a comedy of (bad) manners that makes some acute (anti)social observations and has its audience groaning and chortling by turn in pained recognition or memory – depending on age range.

Jack (Chris Taylor) is a lawyer who wants out. He fancies being creative rather than litigious and to do that he needs Emma (Paige Gardiner) to pay the bills. Unfortunately their Mosman harbour view and DINK lifestyle can’t be supported on a personal trainer’s income and as Jack’s “creativity” is severely limited, trouble is brewing. Emma’s disgruntlement is fuelled by BFF Denys (Brooke Satchwell), when she and real estate agent hubby Stu (Craig Reucassel) come over for drinks.

The play’s style of fast and fragmentary scenes deftly sketch in Stu’s obnoxious, hard-nosed success, Jack’s airy-fairy loser ambitions, and their wives’ semi-benevolent irritation. These men are beyond exasperating, not only to their women but to those in the audience too, many of whom would clearly like to take a meat cleaver to them.

Not surprisingly Emma’s discontent and disappointment lead her into the arms of an older man and client. Carl (Peter Mochrie) is a TV current affairs star whose even tan, debonair ways and white teeth thinly disguise a monstrous ego and little else.

Meanwhile Stu – accurately described by his wife as “a mindless, dick-driven moron” – is two-timing yet again. This time, however, he’s bitten off more than he can chew in glamorous office junior Nikki (Isabella Tannock). She has a voice that could peel paint and ambition to burn and is not about to let Stu off lightly.

The action switches to a Barrier Reef island resort where the bereft ex-lawyer and ex-husband Jack has found a job as a baggage handler (don’t ask). Through various plot wrangles, and unknown to one another, the rest of the unhappy mob also arrives in Paradise. Here they and Jack are coolly observed by resort manager Kelli (Christa Nicola) whose main problem is Jack’s inability to perform the simplest menial tasks. Naturally this leads to Jack being offered the gig of stand-up comedian in the resort’s nitery.

If you’re after deep and meaningful drama or searing kitchen sink reality or hard-hitting politics, Jack of Hearts is not for you. On the other hand, if a cleverly constructed, well-observed and unforgivingly comical portrait of unrepentant 1st Worlders tickles your fancy, then you’ll have a good night out. 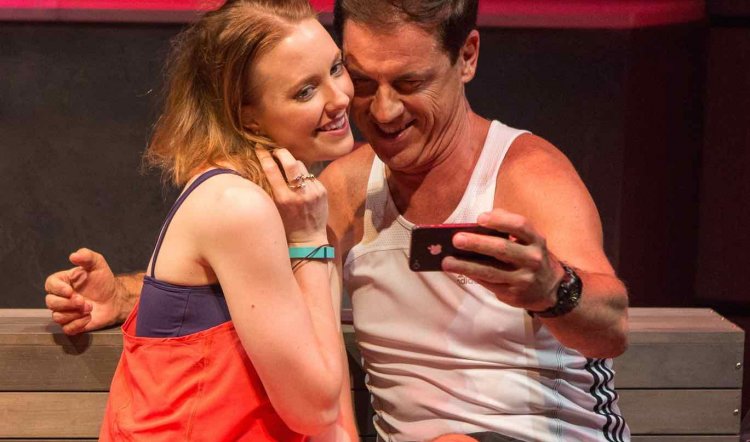 The playwright is also the (deft) director of the piece and took the risk of assembling a cast whose legit theatre chops are, in the main, either rusty or nonexistent. He chose well, however, and the actors have quickly gelled into a well-oiled and assured ensemble.

The Chaser’s Chris Taylor is a convincing stage presence and his bumbling yet optimistic loser is sufficiently charming to make plausible the women’s attraction to him . At the other end of the charm scale and even more conceivable are Peter Mochrie’s narcissistic telly star and the other Chaser Craig Reucassel’s “It wasn’t my fault” Lothario.

Frankly the gals have less to work with – they’re intelligent and attractive, rather than 50 shades of odious – but they do it with elan. And anyone who wonders how on earth these women could fall for such men obviously doesn’t have a friend whose partner is that dopy or insufferable sod you put up with for her sake.

Anna Gardiner has devised an effective set: a monochromatic Mondrian backdrop of rectangular shapes onto which are projected the Mosman harbour view, the various apartment buildings, well-stocked bars, palm trees and beach vistas (sympathetic and sure lighting by Matthew Marshall). The production moves swiftly and unobtrusively with the minimal stylised furnishings shifted by incoming and exiting actors.

Williamson’s 50th is remarkable for the technical skills and sheer entertainment on display; although I’d cut the very last scene and leave it hanging: much more fun.