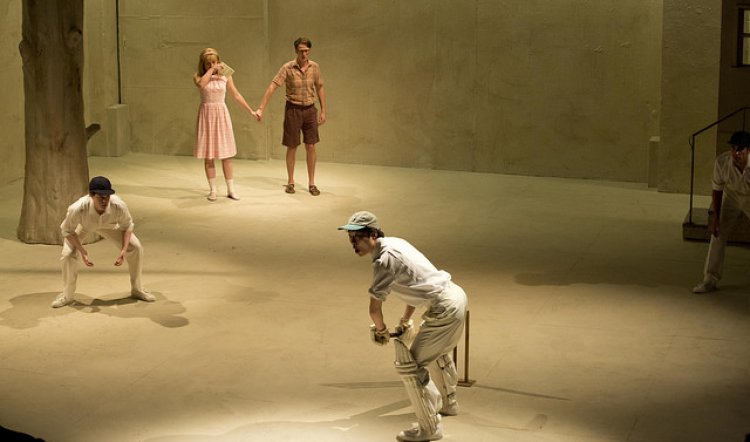 Jasper Jones  is based on the 2009 novel by Craig Silvey and was adapted for the stage by Kate Mulvany. It’s a play of much laughter and comic delight yet there is tragedy; and heart-wrenching insights into the ways and whys of who we are. The result is enthralling story-telling – you just don’t want it to end.

The setting is dreary, dusty small town Corrigan in WA where geeky Charlie Bucktin (Tom Conroy) dreams of writing the great Australian novel while sweating away the summer nights in the louvre-windowed sleep-out of the family bungalow. (Ingenious push-and-pull set by Michael Hankin, sun- and moon-drenched lighting: Matt Scott.)

Charlie is our narrator as well as co-chief protagonist with his friend Jasper Jones (Guy Simon), the “half-caste” town bad boy who arrives beneath Charlie’s window one night intent on having him help investigate a terrible murder. Shockingly hanging from a tree in Jasper’s secret place in the bush on the edge of town is Jasper’s love Laura Wishart, older sister of Eliza, the object of Charlie’s hopeless yearning (both girls: Matilda Ridgway).

Over the two hours (plus interval) that follow, Charlie and Jasper uncover secrets and lies about themselves and the adults of Corrigan that are simultaneously commonplace, shocking, predictable, universal, hilarious and desperately sad. Readers of the multi-awarded novel are in on the twists and surprises from the beginning, but if (like me) you come to the play before reading the book, you’re in for a night of hair- and eyebrow-raising discovery. All of life is here, and then some.

It’s Christmas week of 1965. The Vietnam war has plucked a few more young men off the streets of Corrigan in the lottery, but it isn’t really on the horizon for the boys. Charlie is more interested in the Ashes while Jasper is desperate to avoid being blamed for Laura’s death, as he is sure will happen because he’s the handy blackfella.

Blithely unaware of the undercurrents is their friend Jeffrey Lu (Charles Wu) a talented cricketer whose pointed exclusion from the town team by the casual racism and bullying of weaselly, jug-eared little shit Warwick (Kate Mulvany) says deafening things about the times that also echo today.

The play was originally commissioned for WA’s Barking Gecko by John Sheedy, who also directed the first production in Perth in 2014. This staging brings together once again the remarkable collaborators, director Anne-Louise Sarks and Kate Mulvany whose previous work together was Medea, a piece that can honestly lay claim to the tags “award-winning” and “internationally acclaimed”. And their dual trade marks are apparent in this show. 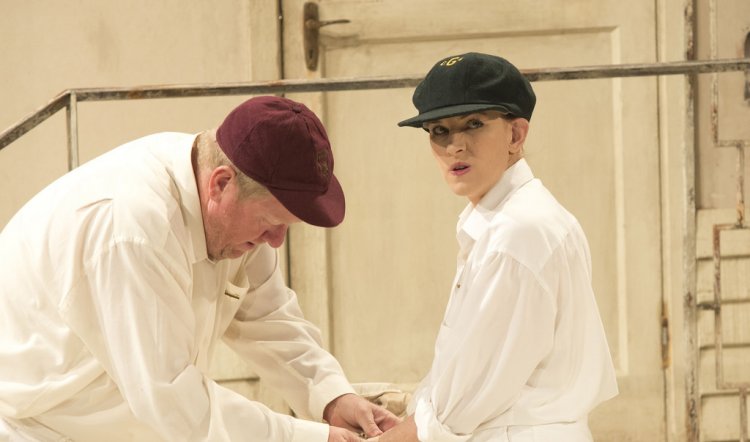 The shaping of the characters is marked by unusually acute humour and sensitivity while writer and director are clear-eyed and abrasively unsentimental in their understanding of what lies beneath and behind the town, its times and its citizens. The middle-aged before their time Mr and Mrs Bucktin epitomise the era.

The mid-60s was a curious moment in the century: caught between the stultifying mores and stitched up habits of Menzies in full swing and the inevitable (but resisted) attitudinal shifts and outward push of post-WW2 energy and affluence. Like so many men of his age and class, Mr Bucktin is an emotional cripple whose basic decency and sweetness are hidden behind a carapace of apparently benign indifference. It’s an inclination that, over the years, has driven his wife to drink.

In lesser hands (writer and performer) Mrs Bucktin could easily be a simple figure of fun and excellent jokes. She’s a bitch, she’s a harridan; she’s also very funny and quite irresistible, but there is much more to her. She is the furiously beating, bleeding heart of the play and the era. Her final, quiet announcement to her son, is one of the most moving and exhilarating you’ll ever hear.

The performances, by all the company (including an unusually involved assistant stage manager: Jennifer Parsonage), are also moving and exhilarating by turn: spectacularly good, without exception. Sarks has cast the play beautifully: it’s hard to imagine it could be done better and, as a result, the actors make everything look easy, natural and pleasurable – despite recalcitrant flying cricket balls and intractable bouncing peaches. And that includes a most ingeniously staged cricket match!

Costume designer Mel Page has captured what passed for provincial fashion with a sharp eye: cinched-in waists, flaring full skirts, dreadfully respectable shorts and suspendered socks and that most ghastly of looks: the drab shirt tucked in to the pants to within an inch of its life.