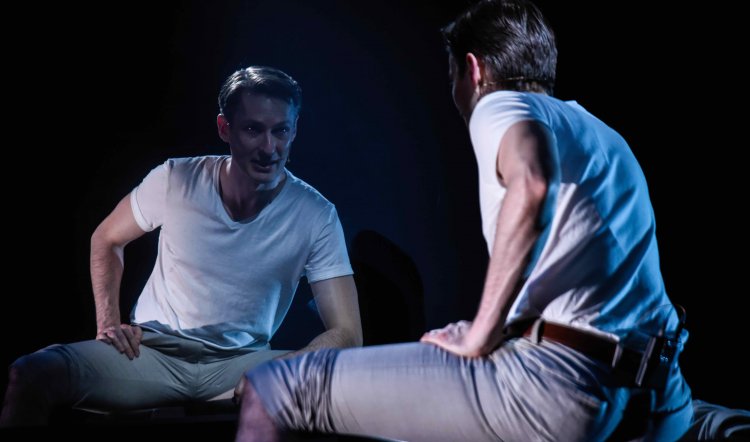 When Lake Disappointment returns or is produced elsewhere – and it has to be – do anything to secure a ticket. It is the most complete and unexpected work of theatre I’ve seen in a long time and it was a privilege to see it.

Written by Lachlan Philpott and its solo performer Luke Mullins, and directed by Janice Muller, Lake Disappointment is both the place and the title of the movie being made that’s starring an elusive superstar named Kane. This information is imparted by his body double (Mullins) who is posed motionless, arms spread wide, freezing in the chill water of the lake, waiting, waiting, waiting. Such is the lot of the one who stands in for the real thing. He is able, but he is not Kane.

The man never does share his name with the audience in the 50 minutes during which he smugly reveals much (deliberately and otherwise) about his arcane occupation of being someone else in their absence. Without seeming to realise it, he occupies a void – and this is echoed in the black and cavernous setting of the huge chamber where spears of light skewer him to the spot and the only colour is provided by the soundscape. (Set Michael Hankin, lighting Matt Cox, sound design and compositions: James Brown.)

Mullins wears a mic and it enables him to maintain a sotto voce conversation with each member of the audience. He imparts very important confidential tidbits or muses almost to himself on the vagaries of Kane’s schedule (he is due to arrive at any moment and will of course contact his buddy immediately).

As time and the demands on his body parts go on (he is an expert with a cup and saucer and was a hand model before going into movies) the man’s confidence and sense of self almost visibly inflate. But Kane is a continuing no-show and other possibilities begin to rise like spectres in the darkness of his imagination. And in the imaginations of the audience too: Lake Disappointment is not only intensely fascinating but also disquieting too.

The synergy between all the production’s elements is remarkable. Director Janice Muller maintains clarity and pace and a remarkable sense of drama even as Luke Mullins conveys the depths of ordinariness and utter dreariness of the man. His is yet another brilliant performance in a career already littered with them. Lachlan Philpott also adds another fine credit to his already heavily laden biog.

I wish I could say “recommended” but it’s over. Thanks to Lisa Havilah and Carriageworks for staging it in the first place. Let’s hope Wesley Enoch or his scouts saw it and we can see it in his first Sydney Festival. Pretty please…