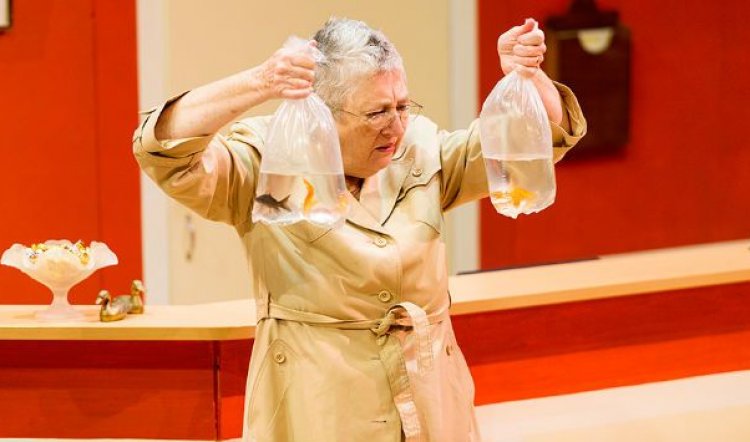 Daniel Keene is a playwright whose work is rarely staged in Sydney, which says a lot about the mist of incomprehension that hangs so thick and so often between here and Melbourne. Thanks however to the intrepid Anne Wilson and her indie company Illuminate Educate (and the play’s inclusion in the NSW HSC syllabus this year), the 2010 Life Without Me has had a too-brief season – finishing tomorrow (February 16 – two shows).

Set in the homely foyer of a small city hotel that’s seen better days (beautifully detailed and thought-out set design by Eloise Kent, similarly detailed lighting Christopher Page), the reception manager (Martin Broome) is startled by the arrival of an unexpected guest (Drew Fairley). He is catapulted through the revolving doors by ferocious wind and rain (sound design – storm, rain, traffic and other city irritants – Ross Johnston) and sets in train a series of events that are by turns funny, touching, weird and thought-provoking.

The receptionist, who turns out to be a Nigel, has clearly not been to hospitality school and if the reluctant guest – John – were not already deep in the clutches of emotional stasis, he would have immediately whirled himself back out the doors as quickly as he’d come through them.

To Nigel’s dismay, another man arrives. Roy (Laurence Coy) is not a guest but a bed linen salesman and his non-diarised appointment with the manager proves to be as much of a problem as John’s lack of a prior reservation. That the hotel is virtually empty and its lift works only sporadically – and there are no other facilities at all – seems to be almost a matter of pride to the receptionist.

Nigel and his establishment have somehow never been touched by Tripadvisor and that, oddly, lends credibility to the sense of unreality which develops as John tried and fails to leave and Roy bumps into Alice (Julie Hudspeth) a woman he knew years ago. Except he isn’t the Roy she knew and she isn’t the Alice he knew…

When Mrs Spence – Nigel’s mum and the hotel’s owner – arrives carrying two plastic bags containing water and goldfish, and she turns out to be the redoubtable Annie Byron, it’s clear that anything might or might not happen. It also explains the nicely set up but unoccupied fish tank.

Despite that, explanations are thin on the ground and when Tom (Brendan Donoghue) and Ellen (Anne Wilson) arrive with personal baggage far outweighing their wheelies, the surreal takes over and the fine line between humour and pathos is repeatedly crossed and recrossed.

In an interview on her Theatrenotes blog in 2010, Alison Croggon asked Keene (her real life husband) “How important is it to laugh?” His answer encapsulates much of what goes on in Life Without Me. He said:

“…People often forget that in almost everything I have written there are moments of comedy (I call them ‘the funny bits’). Perhaps they forget because this comedy rarely lasts until the end of the play. In my plays laughter is usually the prologue to its opposite. Comedy makes the audience more open to what is occurring on stage (makes them more vulnerable to it). I try to create that openness by offering the possibility of laughter…”

Laughter and its opposite are much in evidence in Life Without Me. Mrs Spence is a lost soul whose daffy niceness and exasperating mumsiness barely conceal a broken heart and breaking mind. Annie Byron fills the stage with intelligence and compassion and an absence of vanity that brings the woman to poignant life.

Similarly, Laurence Coy’s beaten down sheet and pillowcase salesman is an affecting presence and his pairing with the always terrific Julie Hudspeth is a highlight. Drew Fairley is also strong as the lonely loser who’s literally lost his way and, with direction it’s possible to see how newcomer Martin Broome’s mannered delivery would be better paced.

Nevertheless, the juxtaposing of the bizarre and the realistic, the comical and the tragic and the excellent playing of the roles has given audiences a rare treat. (In the main these have been lucky teenagers who now go back to their classrooms with a clear vision of what they’re about to read.)

Mainly for them it’s worth going back to Daniel Keene’s Theatrenotes interview for his thoughts on grief and mortality, as expressed in Life Without Me:

“The theatre is a place where metaphors are literally made in front of our eyes, where they exist only at a particular time and in a particular place. When the performance is over, nothing remains except our memory of it. It is as if the performance shares the mortality of its audience. This fact is in itself a metaphor (which may in fact lead us back to ‘all the world’s a stage’)….