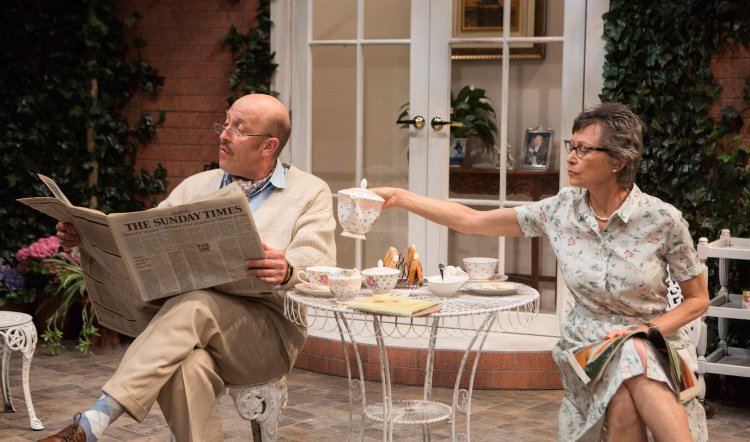 In the Samuel French edition of Relatively Speaking Alan Ayckbourn says, “I wrote this play as a result of a phone call from the late Stephen Joseph...he asked me then simply for a play which would make people laugh when their seaside summer holidays were spoiled by rain and they came into the theatre to get dry before trudging back to their landladies. It seemed to me as worthwhile a reason for writing a play as any, so I tried to comply. I hope I have succeeded.”

As the play continues to be staged, more than 40 years after its successful West End premiere in 1969, you’d have to say he did.

After a slightly sluggish start, Mark Kilmurry’s production quickly gains momentum and confidence as the plot’s convolutions become at once ever more improbable and clear. It’s built entirely of misunderstandings and mistaken identities that are wildly silly and yet entirely logical and often hilarious. It’s a reminder of how good at this kind of impossible concoction Ayckbourn was – right back at the beginning of his extraordinary 70+ play career. And also how deft a director Kilmurry is with actors and trick-cycle dialogue and timing.

The action opens in a slovenly London flat where Greg (Jonny Hawkins) and Ginny (Emma Palmer) have been living together for all of a month. It’s Sunday morning and Ginny is hurrying to get ready. She’s told Greg she’s off to the country – well, suburban Buckinghamshire – to visit her parents for the day. In reality she’s going to see her boss and (married) lover to tell him it’s all over and she’ll be marrying Greg.

Meanwhile, goofy, silly Greg is prancing about in his undies wrestling with ill-defined suspicion at the many, many bouquets and boxes of chocs that have been delivered to the flat. Ginny airily dismisses his questions about this largesse with unlikely stories (the florist’s generosity, for instance). Greg’s also a bit sulky that she won’t let him go with her.

Feckless Greg is as naive and sunny as dolly bird Ginny is knowing and cool: the opposite ends of the youth spectrum of the ’60s. Nevertheless, there’s some niggling in their exchanges and it’s Greg who decides to follow Ginny to the parents where, he thinks, he will ask her father for permission to marry. (The so-called Swinging ’60s was a weird era.) 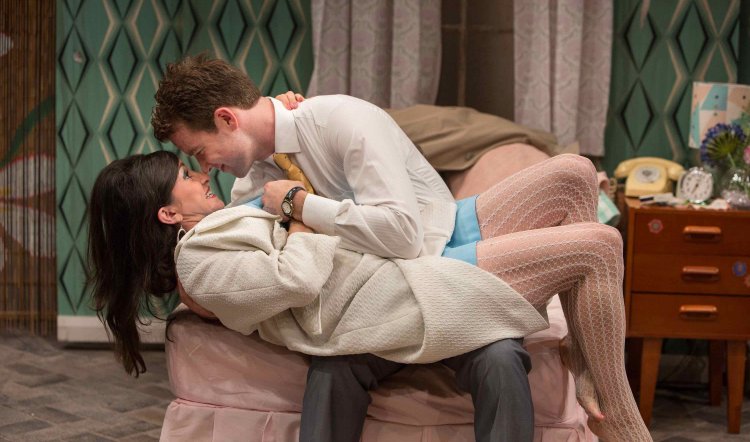 Meanwhile, on a summery patio somewhere in Buckinghamshire, Philip (David Whitney) and Sheila (Tracy Mann) are having breakfast and reading the weekend papers. Theirs is a marriage that would go on to become a staple of Ayckbourn-land: middle class, ostensibly successful, comical, yet darkly and sadly not as funny as first laughs suggest.

Simmering discontent and the position of each party to the marriage is vividly sketched in over the tea cups and toast. Philip has his nose deep in the Sunday Times and remarks over his shoulder to Sheila, “I can't say I’m very taken with this marmalade”. It says everything about their relationship and even while giggles break out, Sheila’s pained exasperation and downtrodden demeanour stop them again.

There should be a sign above each door of the Ensemble’s auditorium warning “Suspend disbelief all who enter here” because there are holes in the plot through which a truck could be driven, but that would be to miss the point. The comedy of errors and omissions is clever enough, but the characterisations – and the actors in this production – are what keep it afloat and bubbling along to a lemon-twist conclusion.

Tracy Mann is subtle, twitchy and irresistibly funny even as the thin veneer of niceness that conceals her acid unhappiness is gradually stripped away. Sheila is the archetype of one of Ayckbourn’s best and favourite characters: the middle class housewife whose life has cheated her and who slowly learns to fight back. Mann is a revelation, from her neatly teased ’do to the dawning of understanding, and it’s hard to take your eyes off her.

The other three are no slouches, however. Philip is an odious and – in these Trump-End-of-Days-Times – only too recognisable a man. He’s entitled, lecherous, inane and empty. As intelligently played by David Whitney he’s all those things but also – and essentially – more: he’s human too, so he’s no comic cut-out and therefore all too credible. 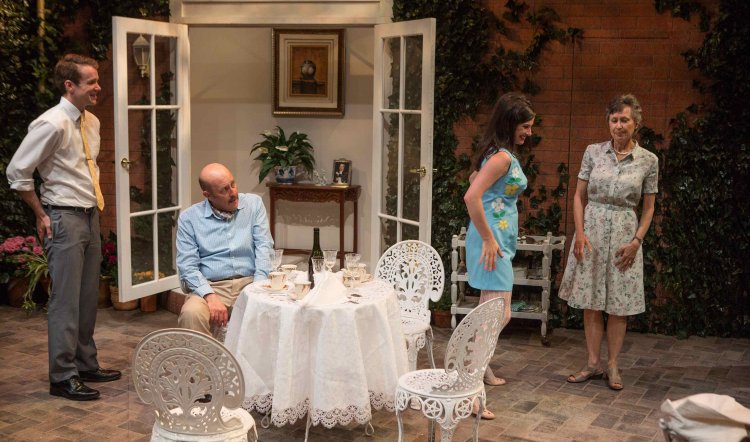 Greg is an amorphous chap by comparison, but Jonny Hawkins shrugs off this difficulty and turns the callow young man into one of the funnier and more endearing nitwits ever likely to be encountered on a stage. All the more remarkable because this is Hawkins’ main-stage debut after graduating from WAAPA in 2014; since which time theatre casting types must have been asleep on the job.

As the comparatively sophisticated Ginny, Emma Palmer has what is virtually the “straight” role in the quartet. It’s an unforgiving place: the maypole around which the others dance and weave the laughs, but she carries off the role with something most often called aplomb and a particularly delightful prissy accent that’s halfway between BBC and Essex (dialect coach Nick Curnow).

Ginny is also gifted with what the program describes as “period style underwear” – actually a hideous flesh pink girdle and bra of the kind that were supposed to keep young females nice before they mythically burnt the bra and moved on to women’s lib – and Lisa Mimmocchi really deserves her credit for these horrid garments.

The ingenious two site set (Hugh O’Connor) brings to life the poky, dingy apartment which you just know smells of bathroom mould. There’s a marked and witty contrast between it and “The Willows, Lower Pendon, Bucks”, where the most likely scent is beeswax furniture polish, and Virginia creeper glows in the sunshine on the old brick walls (lighting Peter Neufeld); and nothing wicked this way comes.

But, of course, it’s Alan Ayckbourn and that means there’s always something wicked lurking beneath the surface. In this instance there’s a quite startling moral vacuum between some of the actions and motivations on display and, world politics been what they are, this is even more evident right now.

Relatively Speaking is a deceptive play and a good production of it. Deceptive because there’s some real acid beneath the apparently benign comedy and it’s therefore much more entertaining than a cynic or sap might at first anticipate. Recommended.