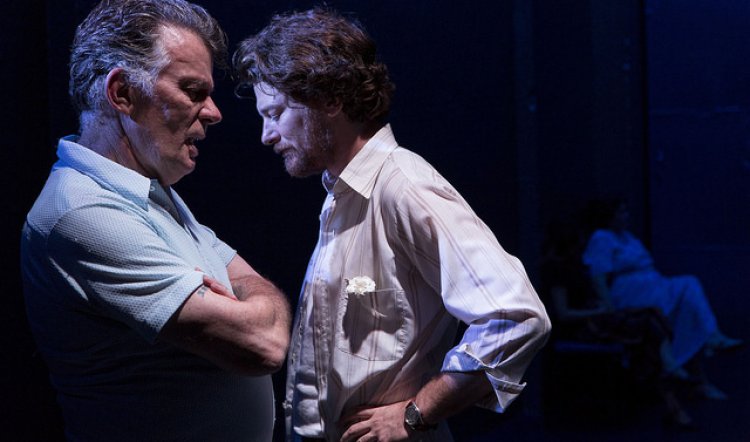 THE BLIND GIANT IS DANCING

Writing in the Sydney Morning Herald in 1995, the late James Waites observed of Stephen Sewell’s then newish play, “A masterpiece in the theatre is not simply good text, and the text for a potential masterpiece may be as unwieldy and structurally flawed as King Lear or Hamlet…The Blind Giant Is Dancing is, director Neil Armfield says in the program, on the sprawling side, but it needs to embrace the enormous palette of ideas the writer takes on.”

Waites was right: the play is unwieldy and structurally flawed and it’s a masterpiece, albeit one whose flaws maybe experienced or perceived somewhat differently twenty years on.

One thing that quickly becomes apparent however in Eamon Flack’s scintillating new production is – the more things change the more they stay the same. The working class aka Aussie battlers at the play’s heart, Doug and Eileen Fitzgerald (Russell Kiefel and Genevieve Lemon) and their sons Allen and Bruce (Dan Spielman and Andrew Henry) are simultaneously at opposite ends of the personal-political spectrum.

Allen is a rising star of the Labor left in beige suede bomber jacket and even beigier Polyester daks, while Doug and Bruce are blue collar steel workers. Their mill is under threat because the state government of the day (Labor) is refusing to tip in more millions in yet another bail-out. Company boss Sir (pre-captain’s pick) Leslie Harris (Kiefel again) threatens Labor heavy Michael Wells (Geoff Morrell) with closure unless they get the cash and also get to shed workers and boost productivity and profits.

Two decades on and, in real life in August 2015, BlueScope Steel warned that without $200 million in cost cuts, including shedding 500 jobs at Port Kembla, it would close the plant. And, by October, with former Labor minister Greg Combet in the negotiating hot seat, a three-year deal was signed permitting job cuts and a three-year wage freeze. Yet all was contingent on a further cash injection of $30 million from the (Coalition) government – or the plant might still be closed.

If Sewell hadn’t written it already it could make a meaty drama, although in The Blind Giant, the fictional steelworks management didn’t report – four months after the job slash and pay freeze – more than doubling its first half profit with sales up 2% to $4.43 billion and statutory net profit up 116% to $200.1 million. Which is where we came in: the more things change, the more they stay the same.

There are differences however, and some, such as the attitudes to and portrayals of women, provoke laughter and gasps in the 2016 audience. Sadly, it’s not that the fictitious men whose raison d’etre is sexism and misogyny are intentional bastards, it’s more that today, although sexism and misogyny are still rampant, now we know they’re unacceptable. Progress.

Blind Giant is also fascinating to revisit at a time when many believe our politicians have never been more cynical nor venal and our politics have never been as cruel, and voters less pessimistic. The so-called triumph of Capitalism – the end of the Berlin Wall, the reunification of Germany and the consequent break up of the Soviet Union – has been fine and dandy for the 1% but for the rest…

Allen Fitzgerald is a union leader and politician with principles and a firm belief in Marxism This places him in the era of kipper ties, Zapata moustaches, static telephones and feminism. Allen doesn’t have the first two but he does have the rest. His wife Louise (Yael Stone) is not only a feminist but also Jewish and a worker in a women’s refuge. However, despite her determined independence and intelligence, Louise is still downtrodden and resentful, despite her Gloria Steinem glasses.

Louise and Allen probably believe they know where they’re going and why, but the fact is, greater forces than they can comprehend make them flotsam on the tide. They are adrift in the times and will crash into unexpected obstacles and run aground even while still believing they’re bright young things rather than doomed players in a sad game of chance. 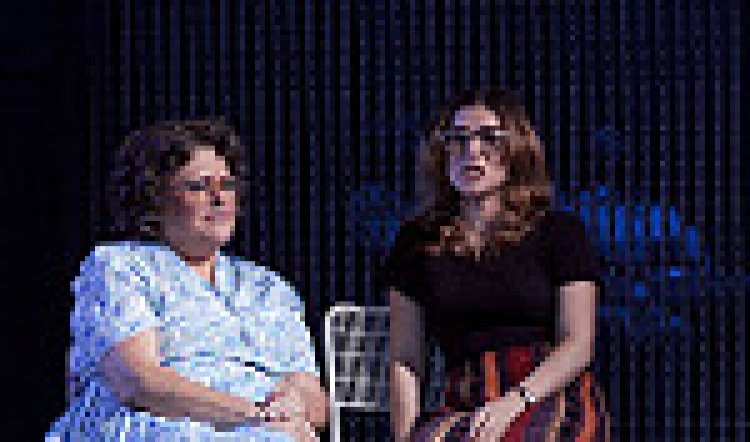 For Allen the chasm between the personal and political begins at home and continues at the office where his enmity with Michael Wells is partially that of Left and Right but also of the younger idealist versus the corrupt barnacle on the ship of state’s backside. Inevitably Allen bangs his head hard on the immovable object and has to decide between principles and pragmatism.

At times The Blind Giant Is Dancing feels like a speedy political history lesson with references to Pinochet, Kissinger and Nixon; the presence of union organiser Ramon (Ivan Donato), a refugee from post-Allende Chile, and an American “adviser” to the state government (Michael Denkha) who just has to be CIA! Which is not to say things today are much different – only the names have changed.

Somewhere along the road to political perdition, Allen says plaintively of Capital: “we think we can change it or alter it – that we create it. But that's not true. It creates us. It makes our desires and our thoughts.” And sure enough, during each of the two intervals, members of the audience sat in the auditorium communing with their iPhones. Sewell was on the money then and now.

Running at close to three hours, with the intervals, The Blind Giant is packed with ideas, argument, story and incident and carries its length lightly. Eamon Flack has also treated the play lightly and its sometimes hectoring aspects seem less intrusive today while the humanity at the play’s heart are foregrounded. This is helped by a cast of great individuals – Genevieve Lemon holds the centre as the put-upon matriarch, Russell Kiefel is shocking and sad as her old school hubby. Andrew Henry’s Bruce begins as a diffident lumpen drone and progresses to union organiser and smart jeans and shirts.

On the road to the ruin of his ideals Allen meets business journo Rose Draper (Zahra Newman). Her somewhat sinister, inelligent presence signals ultimate disaster but, of course, he is oblivious. As he is to the trap represented by Geoff Morrell’s shudder-making epitome of late 70s sleaze.

One of the flaws previously mentioned has to be the mainly one-dimensional female characters. That the women – including the splendid Emma Jackson in a series of thankless secretarial roles – rise above this disadvantage says everything about their talent and professionalism, but it’s a pity nonetheless. Rose Draper’s fate is particularly crass, but that’s NSW 80s domestic politics for you, perhaps.

Also impressive and integral to the clarity and smooth running of a complex play is Dale Ferguson’s one trick set: a mainly empty stage dominated by an oversize metal screen of pixilated white lights. It becomes everything and nothing (blank and unlit) during the course of the action and is very effective as are the costumes (also Ferguson) which are almost as depressing as the politics.

In the end, it’s Allen’s show and Dan Spielman is tremendous as he at first unwittingly and then with agonised deliberation, becomes the very thing he once despised. Flaws and all Spielman, the play and the rest of the cast give great night out. Don’t miss.