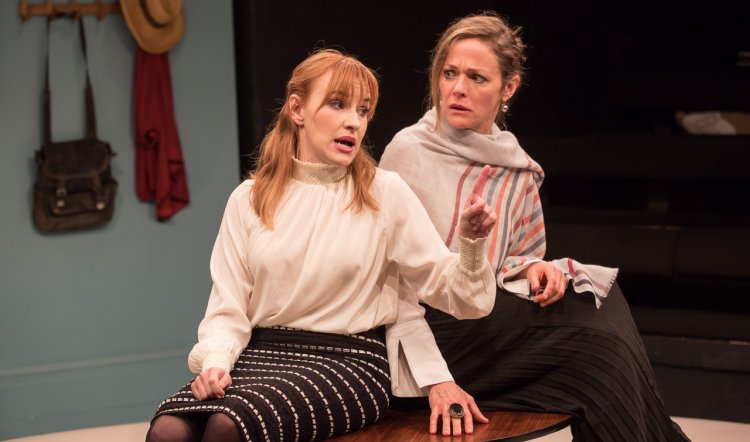 Two years ago Sydney audiences wept – with laughter – at the high-flown flummery of Justin Fleming’s version of Moliere’s Tartuffe. It was inevitable (one hoped) that there would be more where that came from. Remarkably, those hopes have not been dashed for here come The Literati aka Les Femmes Savantes aka The Learned Ladies the French master’s big hit of 1672.

This play ingeniously knits 10 characters and the broadest farce into a tight, sophisticated story line for an energetic company of five actors and – in this instance – a beautifully integrated revolve (director Lee Lewis at her very best).

The revolve is disguised as a circular rug in the centre of an elegant living room whose designer, Sophie Fletcher, has neatly skewered the intellectual aspirations of an haut bourgeois Parisian family. Decorating the room are a small Modernist sculpture, a vase of voluptuous Delbard (??) roses, a couple of Scandinavian chairs, a discreet Impressionist landscape and – piece de resistance – a contemporary Oz Aboriginal canvas that quietly shrieks Musée du quai Branly.

In this strenuously intellectual milieu, the matriarch Philomena, and her elder daughter Amanda, conduct a (nyuk nyuk) Tuesday book club. There they devour literature and guest authors much as sex-crazed lady spiders guzzle their mates. As the voracious pair, Caroline Brazier (in black and white with casually flung pashmina) and Kate Mulvany are breathtakingly ridiculous and perfect. It’s not so much scene-stealing as grand larceny, but as each is as adept and generous as the other in their pocket-picking performances, the audience is aware only of almost constant hilarity.

It begins, however, with Philomena insisting that younger daughter Juliet (Miranda Tapsell in white frock and snowy sneakers) will not marry her non-cerebral beau Clinton (Jamie Oxenbould in a baseball cap) but instead, must wed world’s worst and most pretentious poet, Tristan Tosser (Gareth Davies).

Book-clutching Amanda – whose ambitions are as high as her heels and her humanity as tortured as her Spandex shapewear and short tight skirt – is in a predicament. Although she has already given Clinton the flick she nevertheless doesn’t want Juliet to have him. She will stick a spoke in the wheels of true love if it’s the last she does. (The second last thing being to finally read one of the rarified tomes she carries around.)

Meanwhile Philomena’s poule-pecked but decent hubby Christopher (Jamie Oxenbould without the baseball cap, see above) is up against it. Not only has his wife upset Juliet’s bateau d’amour but also, has summarily fired the family’s hard-working lower class maid Martina (Miranda Tapsell in black frock and snowy sneakers, see above) for crimes against grammar. 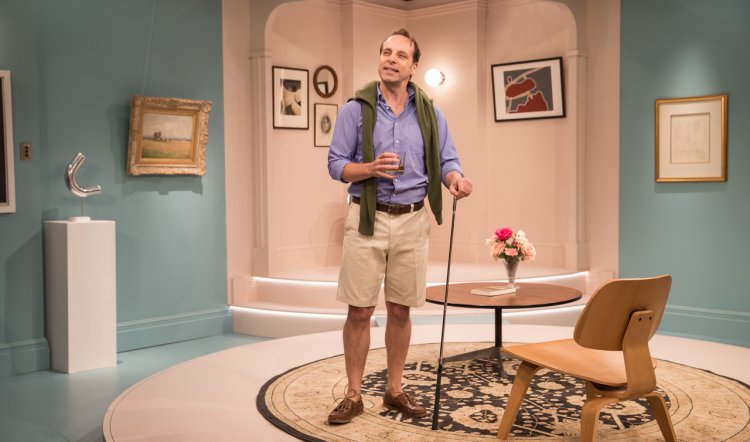 Christopher means well but is like an ice-cream on a hot day when it comes to defying Philomena. Until, that is, an intellect and centre of learning and erudition more stratospheric than even she can overcome enters the fray. Dr Athénaïs Vadius (Caroline Brazier in eye-wateringly elegant black jacket and no pashmina, see above) is a scholar and friend of Christopher’s. She knows more about literature and philosophy than anyone, particularly Tristan Tosser, and she’s taller than the dopy poet too.

By the time an attorney (Kate Mulvany in dodgy raincoat, see above) is called to bring documents for signature and the family goes from rags to riches or maybe not, Just over 150 minutes, including interval, have passed in a flash. Meanwhile, inordinate amounts of fun have been had by lighting designer Verity Hampson and co-composers and sound designers Max Lambert and Roger Lock.

Louis XIV loved Moliere’s comedies and would surely have laughed his wig off at this new take on an old tale. Fleming’s way with rhyming couplets is as legendary as they are shameless and this cast and crew visibly revel in the brilliant ridiculousness. It’s a gift that keeps on giving; Jamie Oxenbould has never been better (a scene where Clinton and Christopher carry on a conversation with the aid of the baseball cap and the revolve is inspired and elicits spontaneous applause.)

Gareth Davies and Miranda Tapsell are maddening and charming respectively, while Caroline Brazier and Kate Mulvany are gloriously awe-inspiring in their dual high-wire acts – between utterly sublime and utterly silly.

This path-breaking collaboration between Bell Shakespeare and Griffin has got off to a marvellous start – don’t miss it. Recommended.