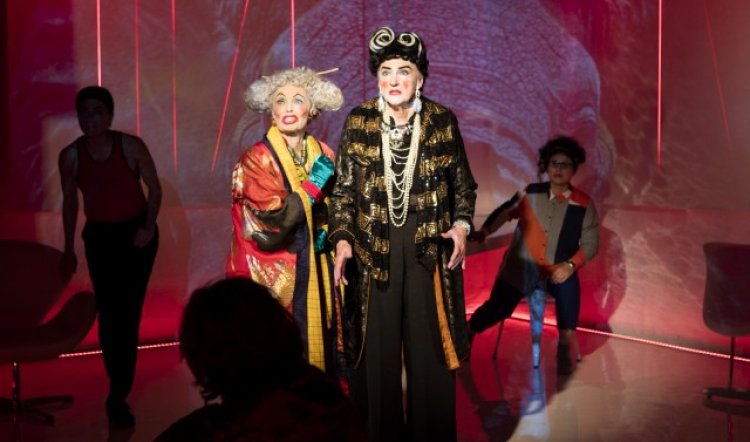 Farce is one of the rarest forms of theatrical life. It’s very difficult to write and even more difficult to stage (successfully). The main reason why it’s so tricky is that, no matter how it’s dressed up, it is the everyday writ large and absurd. And often – these days in particular – the everyday is so huge and ludicrous, to recast it as fiction defies credibility.

For instance, this very week One Nation’s newish senator Malcolm Roberts was arguing the causes of climate change (his favourite topic) with Australia’s chief scientist, Dr Alan Finkel. The resulting exchange is enough to make a sensible person’s head explode – it can be found online, but have a Bex and a cup of tea handy.

It was a stark reminder of what happened when Roberts appeared on Q&A in August and Brian Cox’s head almost did disintegrate. As Neil McMahon wrote in the SMH the next day, “...you know what that means, Australia? We’ve elected Norman Gunston to the Senate...”

What joy then to report that a new and close to brilliant Australian farce is to be found at the Stables Theatre. And all thanks to the canny planning of Griffin artistic director Lee Lewis in putting playwright Stephen Carleton together with director Gale Edwards.

Not surprising really, given the preoccupation of millions as our world is visibly undergoing catastrophic change, the topic of Carleton’s 2015 Griffin Award-winning play is that zeitgeist thing, climate change – the result of it, that is. Set in a major city – in this case Sydney – in the not too distant future, the outside temperature is a steady 48C and the sea level is rising by the day.

Exactly what is happening is beamed in via video link by a masked agitator (iOTA, in beautiful and grotesque form). What he relates involves sewage, Melbourne, Tuvalu, a “Business Summit” and an unusual art installation. It’s downhill to laughter and dread from there.

Overlooking the disintegrating city from the triple-glazed comfort of a glamorous mansion are Augusta Macquarie (Maggie Dence), her sister Olympia (Belinda Giblin) and Augusta’s daughter Basra (Olivia Rose). The latter runs a blog and vlog, while the sisters are two sides of a perfectly hideous political coin: right-wing to the max on one side, heedlessly hedonistic on the other. Spin it and you can’t tell the difference, except by their coiffures and choice of garments (costume designer Emma Vine).

The sisters have carelessly lost their housekeeper (she’s gone back to the Philippines in despair) so when young Visi (Catherine Davies) turns up from the agency in neat black dress and nice white pinny, all seems well. What happens after that has to be seen to be believed. However, because the cast, director and playwright deliver many solid if hare-brained reasons why we should, despite all evidence to the contrary – viz to wit Senator Roberts above – it’s alarmingly easy to fall under their spell.

This applies particularly to Belinda Giblin’s Olympia. A commedia del arte freak, she would nevertheless not be out of place in the Sydney opening night crowd of a major musical. Olympia’s passion in life is jetting hither and yon to see such sights as the last snow melt on Kilimanjaro, the calving of the last glacier and so on. She is a devotee of the Cournot-Marshall theory of supply and demand economics and that’s why she gets very excited at the idea of roasting a Kakapo for dinner.

Meanwhile, it’s quite possible that Maggie Dence’s Augusta is suffering from lifelong overdoses of hair dye and cosmetics. In her position at the top of what passes for government she is vigorously advocating the importance of reviving the fossil fuel industry to combat global warming.

There has to be a charlatan in the wood pile, of course, and he is Jeff Cleveland, a cad and bounder futurist-environmentalist-entrepreneur (Julian Garner). And all these mismatched, unlikely, ghastly creatures careen around the glamorous white apartment like pinballs in a machine gone berserk. (Set design Brian Thomson, AV and lighting design, Verity Hampson.)

Running at a breakneck 90 minutes straight through, The Turquoise Elephant (see it to understand that bit) is seductively funny and satisfyingly silly. Then, when one is sucked in and chuckling at regular and happy intervals, the mood changes. It’s barely perceptible, but the result is a mirror held up to the present day that reflects back a sight much more monstrous than anything on stage.

As is her trade mark, Gale Edwards has fashioned a seamless production. Its focus, momentum and cleverly hilarious attention to detail are tight and fulfilled by the company – as farce must be to stay afloat on a sea of scepticism. Belinda Giblin and Maggie Dence have the best (worst) of the roles and have grabbed them with both hands and run like buggery to the winning post.

The show is a visual banquet – Kakapo and half a Musk Ox notwithstanding – and it’s a great way for Griffin to end a main-stage year that was so nearly derailed by Pompous Brandis (thanks Wharf Revue).

The Turquoise Elephant is a remarkable new play and its been given an equally remarkable production. If you’ve ever wondered how someone might avoid taking a crap for 18 years – this is your best chance of finding out. Recommended.