Three Sisters is, in this new translation for Sport for Jove by Karen Vickery, more than three hours of tragi-comic provincial life in czarist Russia at the turn of the 20th century. It compromises not at all in bringing the minutiae of Chekhov’s original to life and the result is deep immersion for the audience in a time and lives long gone.

Given the Russian penchant for gloom and melancholy (wild generalisation I know, but...) it’s surprising that there isn’t an equivalent word in the language for what lies at the heart of the play. It is what the Welsh know as “hiraeth” – that is, “a homesickness for a home to which one cannot return, a home which maybe never was; the nostalgia, the yearning, the grief for the lost places of the past.”

That’s it really – plain and simple. The Prozorov sisters, Olga (Janine Watson), Masha (Paige Gardiner) and Irina (Zoe Jensen), long to return to Moscow. They yearn for a life they left as children a decade before – and which therefore can no longer exist, if it ever did. Their nostalgia is for an imagined life that makes their lives in provincial Perm an agony of impossibility. Nothing can live up to the memory; they are doomed to discontent.

The play also shines a spotlight on the gross inequalities of Russian society of that time and, without direct reference, reveals why it came to bloody grief in the revolution of 1917. In Kevin Jackson’s elegant staging the chasm between the serf class and their masters (and mistresses) is illustrated in the physical marginalisation of the peasants and unspoken separation of one from the other.

Only the ancient family retainer Anfisa (Lyn Pierse) ever occupies centre-stage – and she is finally ejected and humiliated by the vulgar Natalya (Lauren Richardson) whose marriage to the sisters’ feckless younger brother Andrey (Thomas Campbell) is the – probably temporary – apogee of her social ambitions.

Fans of Jane Austen and Pride and Prejudice in particular will enjoy and recognise the significance of the military presence in the lives of the young women of Perm. Like the Bennet girls, the Prozorov sisters live for the possibility of escape through the officers – into marriage, or flirtation or merely entertainment – and an entree by proxy at least into a more worldly life.

Foremost among the soldiery is Lt Col Vershinin (Justin Stewart-Cotta) but he’s a morose and unpromising creature, despite a passion for philosophy. This interest seems abstract, however, as he is oblivious to the dichotomy between his constant presence in the Prozorov household and affair with Masha, and frequent glum pronouncements about his wife’s suicidal tendencies. Nevertheless, comparing him with her husband, the Latin aphorism-spouting high school teacher Kuligin (Kenneth Moraleda), it’s possible to see why Masha lives in a state of permanent irritation and longing for something – anything – else.

Meanwhile, back at the samovar –and there is one of course: a name day gift to Irina from garrison doctor Chebutkin (Noel Hodda) – disharmony and disappointment reign. Irina agrees to marry Baron Tuzenbach (Graeme McRae) when it becomes obvious that returning to Moscow isn’t going to happen. But even this loveless ambition is thwarted when he is killed in a duel by another suitor, the OCD-afflicted Captain Solyony (Dorje Swallow). 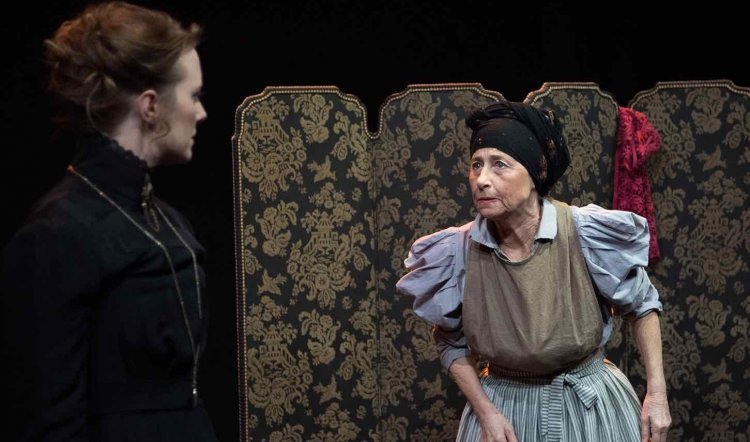 There are many bedtimes over the four years of the play and many tears before each. As well as hiraeth and pathological discontent, there is an obsession with the concept of Work. Characters speak vehemently of the need to do it and do it a lot, which is ironic as aside from the teachers among them, for work is the last activity the average bourgeois would consider.

Set designer Georgia Hopkins cleverly uses the entirety of the downstairs black box as the various spaces of the Prozorov residence. A collection of Persian-style carpets both delineate rooms and further the illusion of a spacious stage and, with Martin Kinnane’s alternately bright warm or gloomy “candle” lighting, the seen-better-days but suitable furnishings keep the eye engaged and in tune with what’s happening, where and when.

Fourteen principal actors and six “extras” inhabit the world of Chekhov’s everyday and the luxury of the numbers and uniform excellence of the performances make for a remarkable experience of this favourite among the playwright’s great works. The sisters are the core of the action and Janine Watson (Olga) and Paige Gardiner (Masha) are highly charged and effective, and when Zoe Jensen’s first night nervous volume reduces a little her Irina will be equally so. That they are finally so ruthlessly rounded up and (spiritually) despatched by sister-in-law Natalya is a tribute to Lauren Richardson’s power in the role.

Encapsulating the likely future fate of the men, Noel Hodda's Dr Chebutkin is an amiable but sad drunk whose days in uniform are numbered. (Emma Vine’s excellent period style costumes enhance the sense of place and time and class.)

As the ancient and much-loved nurse Anfisa, Lyn Pierse is outstanding as the mostly silent yet central symbol of all that is wrong with the society of the play. Her still presence (she sleeps a lot!) and stooped fatigue are at once touching and ominous – for anyone who is paying attention, but no one is.

Altogether, the company and director Kevin Jackson have conjured a rich, funny, poignant and fresh theatrical experience out of this 100+ year-old favourite. Its exceptional clarity lies partly in the staging and partly in the performances and either way, rarely will three-and-some hours pass as quickly or as pleasurably as these. Recommended.