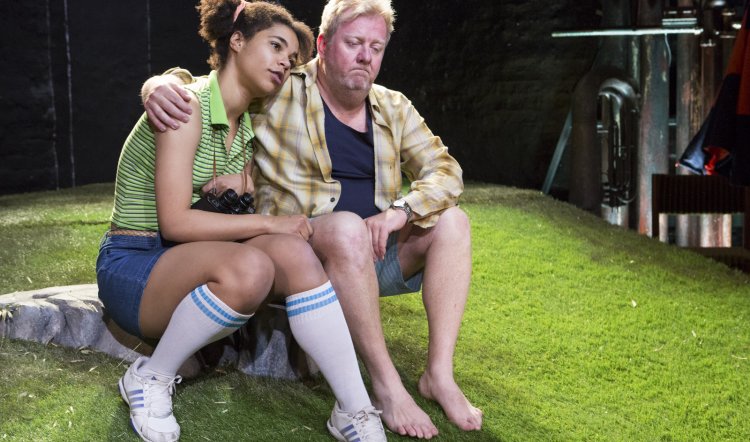 When Katherine Thomson toiled for over a year to draft, redraft and eventually finish the play that has become the classic, Diving For Pearls, Australia and the Mother Country were in the midst of social, political and economic upheaval. Although first staged in the early ’90s, the play’s setting and roots are in the ’80s, whose own disasters of economic rationalism were born in the late ’70s.

The title – spoken poignantly by Barbara (Ursula Yovich) as her dreams crumble  – is from the song Shipbulding, Elvis Costello’s 1982 bitter ballad of shattered working class aspiration. Barbara describes how kids used to dive for coins off the jetty and were sometimes cheated of a sixpence by the throwing of a penny, and says wistfully, as does Costello in the song, we were... “Diving for dear life – When we could have been diving for pearls.”

It’s a touching description of the life Barbara and her fella Den (Steve Rodgers) are living with Barbara frantically, even ruthlessly, reaching for the pearls (a decent job with prospects) and a better life with a man who at least has his own house. Meanwhile Den is content to labour at the steelworks, yet sensitive enough to be abashed at reminding Barbara of how it had been for her: “You can say it,” she says pugnaciously, “The boarding house,” of her previous lodgings.

Then as now, however, change is coming – the thing Den cannot fathom and Barbara yearns for. It arrives first in the shape of Den’s brother-in-law Ron (Jack Finsterer), once a lad of the smoke stacks, now a suit-wearing management apparatchik. The steelworks is under review, the Minister wants to improve output and working conditions; Den is thrilled and doesn’t see the contradiction in those two goals. If Ron does, he’s not saying.

Meanwhile, Barbara is pursuing her own upwardly mobile vision: an expensive course that will enable her to get a job at the new “international hotel” which is about to transform plain old City Beach into chic Resort Beach. Not that her sunnies are rose-tinted:

“I’m not stupid,” she says. “I’ve gone into it. I know my age. You don’t go for waitressing or behind the bar, women my age are hostesses. Here’s your table, here’s your waiter, here’s the conference room. Have a nice conference...I know you have to look the part. Like you were eating croyzants before anyone else had heard of them. You can do anything these days. Well, you have to.” 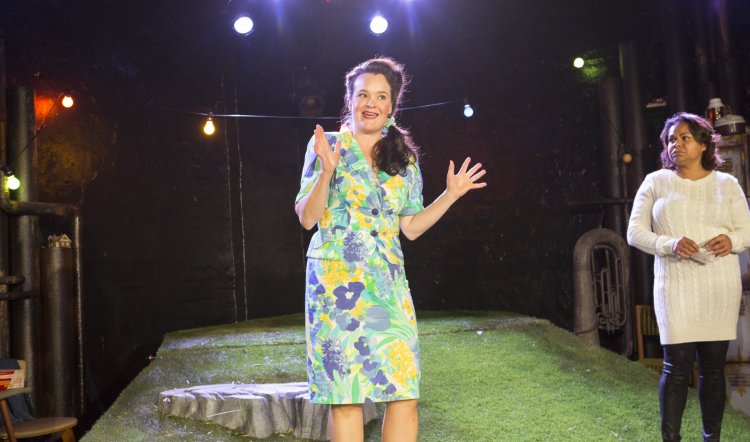 Verge is a bright and feisty girl but brain-damaged from a childhood near-drowning. Barbara cannot cope with her: guilt, despair and the inhuman efforts she must make to keep herself afloat and her relationship with Den intact make the idea of having the girl around a terrifying prospect. Neither can she cope with Marge’s serene sense of superiority; having given up the smokes for her newly-acquired manners, Barbara returns to the fags like Puffing Billy.

Katherine Thomson created a brutally unsentimental, realistic character in this woman on the brink and Ursula Yovich is unflinching in portraying her, warts and all, with no plea for mercy. There are gasps in the audience at various points, while a lump in the throat and tears are never far away. These feelings are multiplied by Steve Rodgers’ tenderly intelligent characterisation of the hopeless yet painfully noble Den.

They are brilliantly supported by Michelle Doake’s colonial Hyacinth Bucket: lemon-lipped, acid-tipped, yet somewhere there is still a glimmer of warmth that she can’t quite kill. Jack Finsterer too, is the believably three-dimensional, flawed yet good bloke who’s surfed the breaker of big business and tried to chuck Den a lifejacket.

Finally, and remarkably in this terrific cast, is new NIDA graduate Ebony Vagulans. As the damaged girl who is still optimistic and seeking “family” despite all evidence to the contrary, she is very good. It’s a heartbreakingly beautiful performance, never sugary or soppy and at once respectful and aware of herself in the world and the play. Will go far.

Not going anywhere fast, of course, is the ailing town and its decrepit steelworks. Set and costume designer James Browne captures the time and place with wry detail and accuracy. The stump of a once great eucalypt is the one feature of a grassy hillside that overlooks the town – portrayed in tiny buildings dotted about along with Den’s boyhood train set (complete with miniature sycamores and elms that made up the imported landscape). 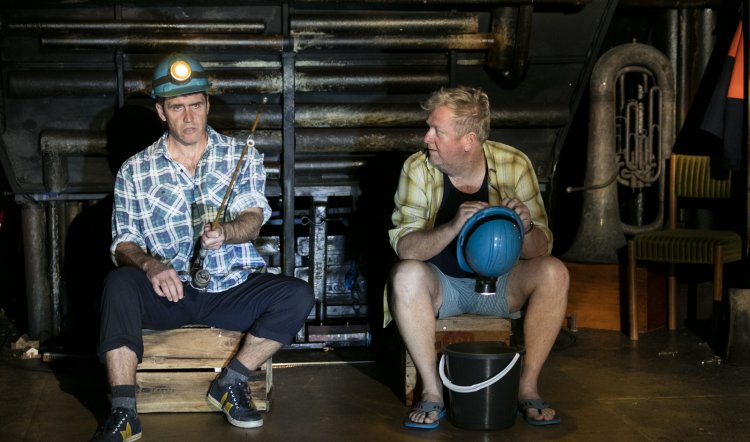 The setting cutely changes, via hand-cranking and much groaning and clatter of rusty metal, to the interior of the steelworks. With Benjamin Brockman’s chiaroscuro lighting, the dingy, grimy, fire-lit manufactory is almost a homage to Stanley Spencer’s 1940s series, Shipbuilding on the Clyde: all sweating labourers, writhing pipework and hard-hearted rivets. It makes Den’s plight and final actions even more stark.

“Because I will have my say,” roars Den with late-blooming defiance. “Because this will keep happening. Because we’re one more thing that gets disposed of – and I keep thinking, what do they think I am? And the point is, there were people who were paid to plan, to win contracts, to stop the rust. If the writing was on the wall, why wasn’t it read out loud? Look, I know I’m thick, but this accountancy, all this accountancy – where are the people in their equations?”

Director Darren Yap honours the text and his actors in this beautifully calibrated production: occasionally unsteady on opening night but bound to quickly settle into the rhythms and richness of the story and the play. The playwright’s characteristic and irrepressible droll humour is there along with compassion for these people and rage at their predicament.

Diving For Pearls was an exceptional play when first written, tragically, its characters are as realistic and its story as pertinent today as they were almost thirty years ago.

This is a production not to miss – seriously recommended.