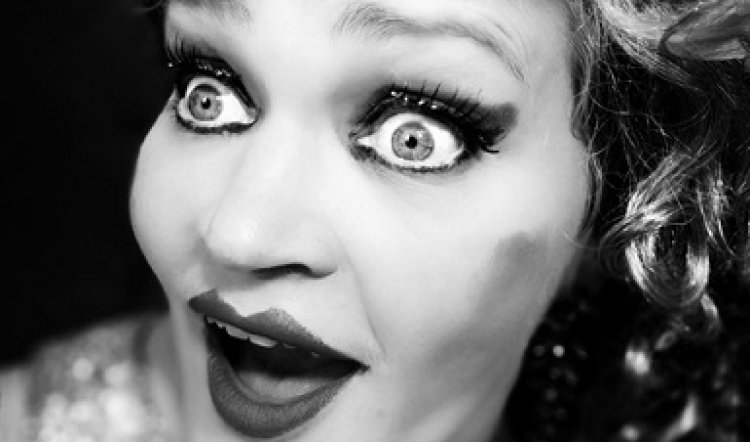 FULLY MADE UP – MELBOURNE

FULLY MADE UP, Melbourne Cabaret Festival, at the Butterfly Club, 4-9 July 2017. Photography: above - Jenny Wynter

Jenny Wynter is “fully made up” in more ways than one in a show that is built around a musical through line with input from the audience. Wynter rises to the challenge with a twinkle in her eye and a gift for the absurd.

Like many people, I tend to get nervous when a sheet of paper and a pen are thrust at me before a show; but that is the nature of this particular piece of improvised theatre, so I hide my chagrin and put pen to paper. Meanwhile, the rest of the audience is buzzing – a good sign.

Enter the piano player (Matthew Hadcraft), properly self-effacing. As he hits the keys (and he’s good) he asks the audience for the name of the street they grew up in and the name of a favourite aunt. There are shouts from all quarters, he puts the names together and voila! Enter the star of the show – one “Carmel Belinda” – cue audience laughter.

The music is formulaic, but it has to be and is no less amusing for that. It gives Wynter and Hadcraft something tangible to play with and play on – from ballads, to pop, to belting numbers. It matches the well thought out central conceit: of the ingénue wanting to make it big on Broadway.

Wynter cleverly interweaves the narrative with the audience’s words – which are mostly very funny. She holds onto some of the lines from beginning to end and makes hits out of them. In other words, as the blurb neatly explains: “In an off-broadway cabaret bar in NYC, [Insert Name] has performed on stage with the likes of [Insert Impressive List Of Famous People]. Her heartbreaking story of Insert Story] has led her from [Insert Place] to [Other Place], leading her to ultimately experience [Insert Emotion].” Clever.

She shares the stage intermittently with Pasquale, the invented 14-year-old daughter (Ella Wynter). Very vaudeville – keeping it in the family – it’s a cute moment. Then we get Rik Brown who has been watching and has all the lines that have been used down pat for a scene and a number. Brown is spot on and funny and he can sing, a great foil for Wynter.

All in all, it’s a rollicking night; although I couldn’t quite work out the satin sheet as the frock…Got to love cabaret.