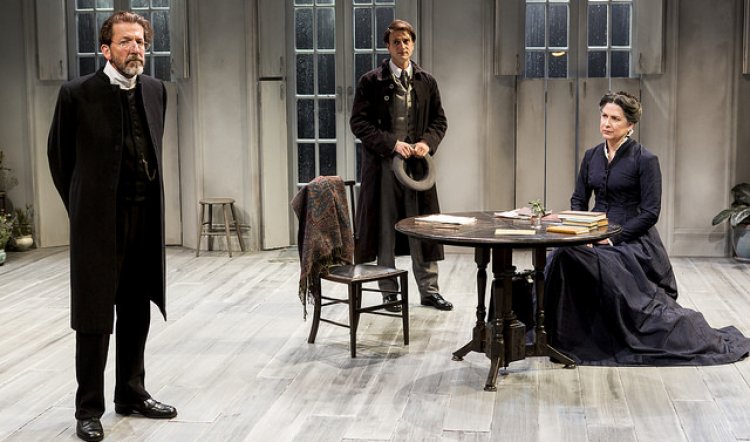 In his “director’s and adaptor’s notes” Eamon Flack remarks: “We are never done with the past. It never goes away.” How true this is of Ghosts, Flack’s excellent version of Henrik Ibsen’s 1881 play. Gasps of recognition and disbelief could be heard in the audience on opening night at its up-to-the-minute hypocrisies about marriage, religion and (un)equal rights.

Flack also writes in the program notes: “Our production isn’t set in 1881 so much as set now in a room where nothing has changed since 1881.” And as the marriage equality “debate” rages around the country at this very moment, it suddenly dawns that the same could be said of what’s going on outside the theatre – not 1881 so much, but definitely 1951.

It’s a situation that almost physically drains the air from the lungs and optimism from the heart as we share the plight of Helene Alving (Pamela Rabe) as she navigates the affected piety and coldly judgemental society, as represented by Pastor Manders (Robert Menzies).

Pastor Manders’ shoulders and entire demeanour are bowed beneath the weight of the disdain and disapproval he feels towards his fellow man – but mainly woman. His keen gaze is constantly on the look out for inappropriate behaviour of the slightest kind and he is quick to condemn. Compassion and forgiveness are not part of his ministry. Yet, of course, he believes himself to be a man of God, which is a sadly familiar dichotomy in 2017.

Manders’ blinkered and myopic worldview is in stark contrast to that of Helene. Although it’s clear she has never traveled beyond the small town near which she lives in an isolated country house, her humanity, wisdom and forbearance are all the more painful to witness as the facts of her life are revealed. 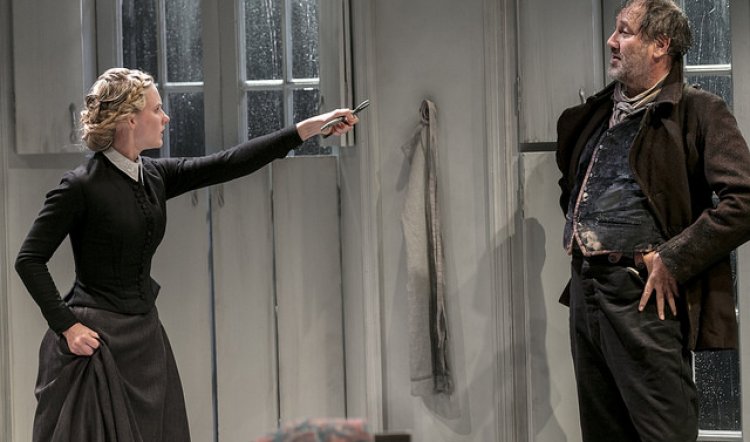 She and the Pastor meet in her conservatory one chilly, rainy morning to finalise details for the grand opening of an orphanage. The institution, built to commemorate her late husband, Captain Alving, is her initiative and entirely financed from her own pocket. Nevertheless, all advice and control resides with the clergyman, including a decision to not insure the building – lest the townsfolk think she does not trust in God’s protection and benevolence.

She does not protest, but the slightest movement by Helene, an almost imperceptible straightening of her spine, shrieks that she believes this is a bad decision. But, ever dutiful and a woman of 1881 (or 1951), she lets it go. And so it is between these two, the one so arrogant and unconsciously entitled, the other so knowing of all that and also her lack of power.

Constriction is also evident in Helene’s gown (costume design: Julie Lynch). It’s an elegantly-tailored thing with an entirely impractical, floor-sweeping train. It’s a ridiculously telling contrast to the long, tight-fitting sleeves and high collar which reveal the merest suggestion of lacy frivolity (or should that be femininity?) while the horrors of corsets are evident in posture that has everything to do with whalebone pressed into service of rectitude and respectability. It ought to make any woman scream – politely of course.

The religious constraints of this small town and its social introspection are captured by the setting, designed by Michael Hankin with lighting by Nick Schlieper. Although it’s an elegant conservatory, it’s closed against the sun and the world with tall narrow timber shutters that might keep out the rain and cold but also keep in the frigid atmosphere of the Alving household. Darkness is somewhat relieved by a glowing oil lamp, but it’s a losing battle against the thin, misty light that seeps through the gaps. It’s a shiver-inducing mixture of Bergman and Scandi-noir in which even the plants look defeated.

On the other side of the social divide, Jakob Engstrand (Colin Moody) is a rascally working man whose employment on the construction of the orphanage is at an end. With the money saved from this job he intends to open an inn for the comfort of seafaring officers – no riff-raff – and wants his daughter Regine (Taylor Ferguson) to give up her position in the Alving household to work in it. 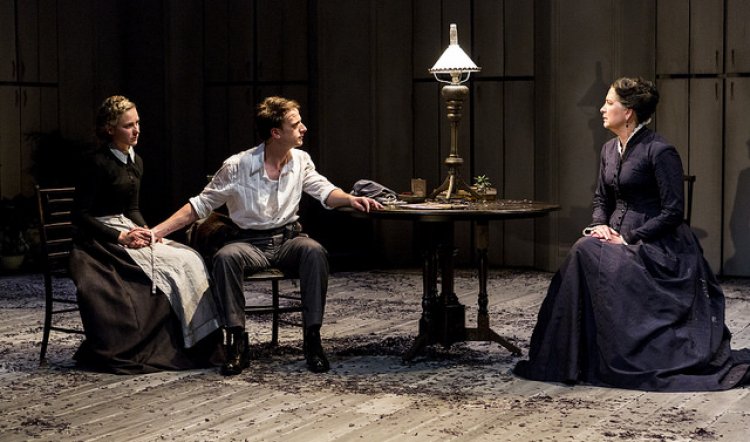 Ironically, young Regine feels much less obligated to obey than her mistress. She refuses: she has plans of her own and is learning French in order to further them. One reason why this might be arrives in the shape of Helene’s artist son Osvald (Tom Conroy). He has just returned from two years in Paris and although there is a promise to stay for the winter, it seems likely he will go back as soon as he can escape.

Nothing is as straightforward as it first appears, however, and while Helene finally spills secrets about the real nature of her late husband that knock the self righteous Pastor for six, it is as nought to what Osvald, in anguish, confides to her. Finally, when she, in turn, reveals why Osvald and Regine cannot pursue a romance, it seems likely that Pastor Anders will succumb to apoplexy as his moral certitudes go up in smoke along with the orphanage. It could be funny if the pain and damage caused by such sanctimonious humbugs as the blind religious were not so terrible.

As Helene, Pamela Rabe gives a performance which is at once subtle and heart-wrenching; her gradual descent from dutiful sadness to utter desolation becoming tangible and memorable. Playing opposite her, Robert Menzies is at his very best: arrogance and defeat, bewilderment and fury radiating from his visibly deflating body. They are magnificent.

In support, Tom Conroy is a ray of sunshine that soon disappears behind the massing clouds of his own mortality: another subtle and heartfelt performance. So too, Taylor Ferguson, all hopeful, defiant youth and smarts and Colin Moody: lame in body and soul and sourly cynical as vinegar. In bringing this company and production to Belvoir's stage, Eamon Flack has also brought wit, nuance and humanity. Ghosts is a tragedy, grand and small, and as current as tomorrow’s news. Totally recommended.