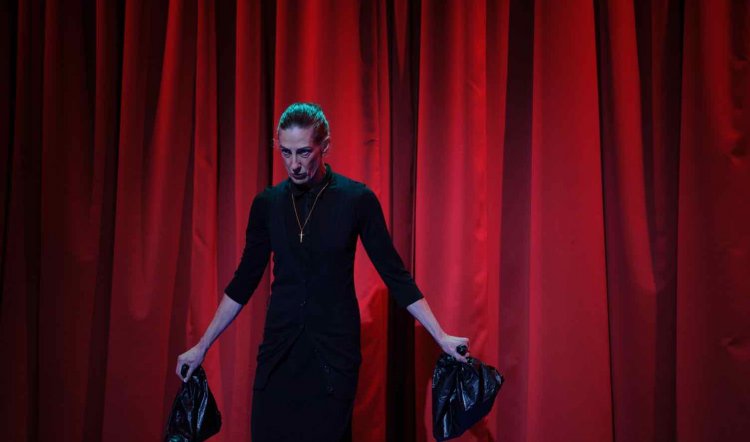 Based on the book by Christos Tsiolkas, Merciless Gods has been adapted for the theatre by Dan Giovannoni. There are eight vignettes in which you can hear Tsiolkas’ voice, his observations of life, heightened by the pen of Giovannoni. Each story is complete and full of intrigue.

The first is centred on a group of former university mates (Paul Blenheim, Brigid Gallacher, Sapidah Kian, Peter Paltos, Charles Purcell) picking at one another while joints and wine are passed around. It then turns into a game: who has the best revenge story. Through words it gets nasty and leaves a bad taste in your mouth.

Gallacher’s piece has a young mother lamenting and venting the change in her adolescent sport-loving son and the changes it creates in herself. It is gritty, grimy and confronting. To end the act, comes the self-proclaimed anti-mother, a larger than life bohemian writer, Lisbeth (Vuletic). For some reason the daughter has gone to Berlin to bring her mother back to live with her in Australia but the older woman is dismissive of her educated feminist daughter (Gallacher), and even ruder to her daughter’s anything-to-keep-the-peace husband (Blenheim). Lisbeth, in a red billowing gown which embodies the flamboyant eccentricities that motherhood all but stifled, is a confronting figure. She drinks, she struts, she dismisses, she disgusts.

Then there are the junkie rent boys (Blenheim, Purcell) who take us on a journey that is unsettling in its gentle pain and ugly reality. And a monologue by a suicide bomber (Peter Paltos) is unnerving. Set in prison, we see how he is irritated by the lack of respect for his religion, his hatred of fellow inmates and the gut-wrenching illustrations of his treatment (abuse) and heinous crimes. 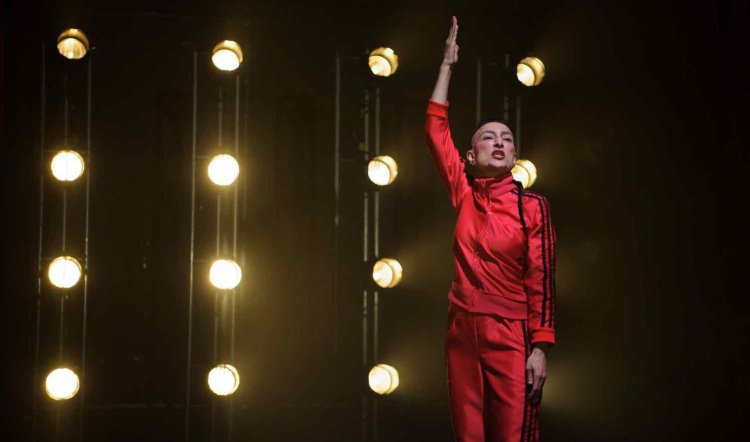 A family confronted by terminal illness gathers to end the life of their patriarch, brilliantly portrayed by Vuletic, who has over his life done what he wanted to do; they love him and they hate him, but love him enough to end is life. Kian rounds off the night with a soliloquy set in a gay sauna; her stillness and eloquence paint a riveting picture.

Everything about this production and writing is unnerving. There is a gentleness hiding the hideousness of what people do to one another. How life deals certain cards. Stephen Nicolazzo is a talented director who knows how far he can go and how to get his actors to come on the journey with him, and they do.

The set, by the gifted Eugyeene Teh, is a tapered runway with a theatrically vivid red billowing curtain; Teh is also responsible for the costumes. Music – so important to this production – is wonderfully realised by Daniel Nixon and the equally able lighting designer Katie Sfetkidis completes the creative team. Gosh, they’re good.

Merciless Gods is a harrowing, provocative, moving, funny, breathtaking night in the theatre. Little Ones Theatre is a company that delivers work that resonates with excellence. Brilliant.