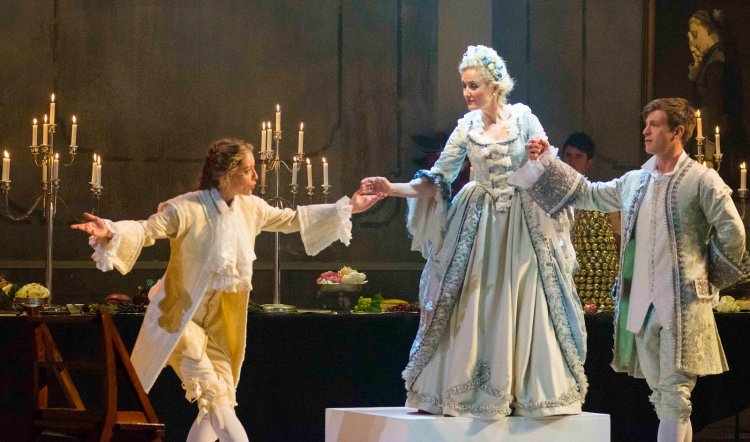 Pinchgut artistic director Erin Helyard can be relied upon to do something unusual or unexpected and he’s exceeded expectations with this triple bill. It introduces audiences for the first time to the live experience of Jean-Philippe Rameau’s Anacréon followed by the intermezzo Erighetta e Don Chilone by Leonardo Vinci and, in the second half of the program, by Rameau’s Pigmalion.

Dating from the mid-1700s, they clearly show us the difference between the French and Italian styles of the time, which caused much wrangling among contemporary audiences and now – you choose. For me Rameau is a sublime master of multiple soloists and harmonies. His music is elegant yet full of colour and emotion and as sung by Taryn Fiebig, Lauren Zolezzi, Richard Anderson and Allegra Giagu in Anacreon, then with Samuel Boden in Pigmalion, it made Vinci’s jolly romp-with fart joke worth its place as the flatulence in the musical sandwich.

The setting – tall and Enlightenment simple – suits the City Recital Hall and the predominant set and costume colours of icecream pastels is reflected in the blond wood interior: sumptuous and effective even as racks of costumes are wheeled on and off stage and the performers dress and re-dress for each piece.

There is also some slyly symbolic work with giant picture frames that plays with “the look” and”the gaze” in a witty and post-modern (!) way. All this busyness successfully carries singers and audience through the more static elements of Anacréon in particular and also adds to the intimacy of opera that’s now virtually lost in the present day penchant for grandeur.

The over-arching themes of life and art and imitations of both are deliciously played out, with the Orchestra of the Antipodes led by Erin Helyard out front and sounding both unified and energetic, and when joined by the chorus, often rapturously  magnificent. Such a treat!

The singers, of course, are among the best. Soprano Taryn Fiebig takes on three different roles with equal power and élan and is also one of the funnier actors in opera. Her final turn as the “statue” in Pigmalion is breathtaking as she finds a bell-like clarity and purity that lifts her performance into the ravishingly memorable. 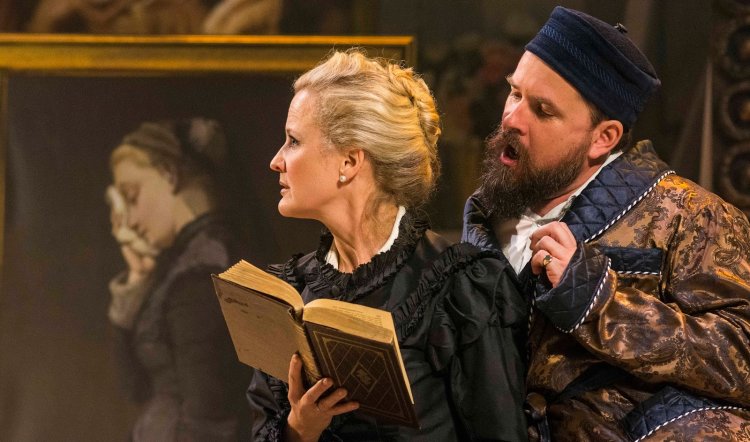 Memorable too as Cupid in both the Rameau pieces, London-based Australian soprano Lauren Zolezzi’s debut in Sydney makes one hope she’ll be back before too long. Like Fiebig, she isn’t afraid to act and as a former ballet dancer, she has the moves too and can do it all while singing with charm, agility and power: major talent on the rise and already recognised in the UK.

As Anacreon (and Don Chilone) baritone Richard Anderson has the necessary dramatic and vocal presence both as a drunk and a high society patriarch – some might think it a natural combination – and he’s excellent in both roles. Samuel Boden is at the other end of the vocal scale, as Pigmalion, and his agile and intricate tenor is a judiciously placed and delightful instrument.

In supporting roles, Allegra Giagu and Morgan Balfour not only held their own but also added to the vocal richness of the evening. Giagu has developed into a strong and confident performer whose Wife of Anacreon is poignant and beautifully sung, while Balfour makes every moment of his role as the Sweeper count. A terrific company, intelligently utilised.

Pinchgut Opera is a vital and increasingly important part of Sydney’s fine music life as the company brings to audiences the kind of work, voices and new/old revelations many crave. Unless you read this before tonight (Tuesday, 20 June) you’ve missed this production.