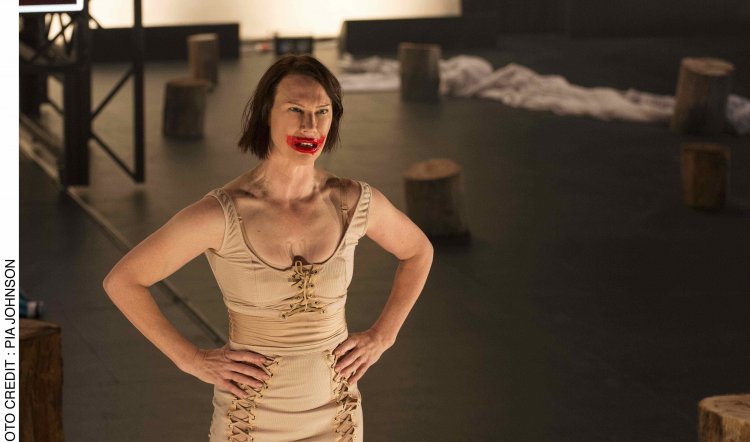 Alice Birch, writer of this wonderfully realised piece about what it is to be a woman in the 21st century, suggests that the staging of the play “should not be well-behaved”. Director Janice Muller has taken that to heart and given us a superb slow burn into a maelstrom, a cacophony and a series of vignettes about female life, each sign-posted via an overhead projection of a slogan.

The opening is innocent enough: a fragment of Shaft, a shadow box that, when it goes to black with a lighted edge, is reminiscent of a large LED screen. We are watching a movie of snippets of life. How women and men hear things differently and how that manifests.

The first of these scenes – “Revolutionise the World. Invert it” – is handled deftly by Sophie Ross and Gareth Reeves and shows how word-play asforeplay shifts when the power of word and action is given over to the woman – the man very quickly losing his edge! He feels it’s okay to signify scream, thrust and penetration, but when the woman talks of wilder places he’s aghast. Then we move into another situation, with Mingh-Zhu Hii and Gareth Reeves and again it’s how words and actions and control differ. It moves then to the work place and power and forthrightness with Belinda McClory and Elizabeth Esguerra.

By now the audience is comfortable, laughing… then there is a shift; the laughs dissipate to silence and stillness: the safety of the shadow box cracks as two supermarket employees (Gareth Reeves, Elizabeth Esguerra) abuse and berate a comatose woman (Sarah Ross) who has had an incident in one of the aisles. It is her silent reaction, moving to a suicidal escape monologue which captures their violence, judgement and wrath. This is when you know the playing field is not level and is tilting.

The shadow box is replaced by tree stumps and a frenetic, brazen, agonising and humorous account of women, generations of motherhood, domestic violence, loss. Not wanting to miss something of importance – it is all important – your gaze is drawn in a flash to each side of the open stage,. 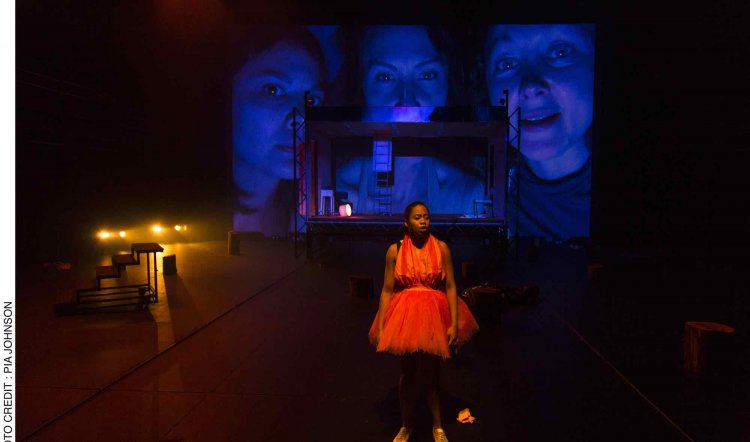 Emma Valente is surely becoming a tour de force in the lighting world and in this show she doesn’t disappoint. Going from the comfort of the shadow box to mayhem, to the apocalypse, her work here is brilliant. The sound and AV Design by James Brown are equal to that brilliance; toe tapping into the weird and wonderful and ear splitting – perfect. And Marg Horwell’s costumes and elevated set design are their visual equivalent.

The actors, taken on a well-defined ride by Muller, are all excellent. They each have a “moment” and collectively they are in sync with the text and one another. Muller’s work is exciting and captivating: she has given the writer’s words and intention the energy that is required.

Eventually, when you think it can’t get any wilder or more energised, the lighting and the sound come to a screeching, blinding stop. there is stillness. A fitting end? It could have been, but there is more in this ambitious and audacious roller coaster ride that is woman and the arguments that has gone on for millennia about women and their place in the world.

Birch, Muller, the cast and creatives give us a crazy and thoughtful if sometimes confusing journey in more or less four acts. When Esguerra finally and wearily comments to the audience, “Who knew that life could be so awful,” the chuckles are not from the women. It’s an important piece of feminist theatre. More please.