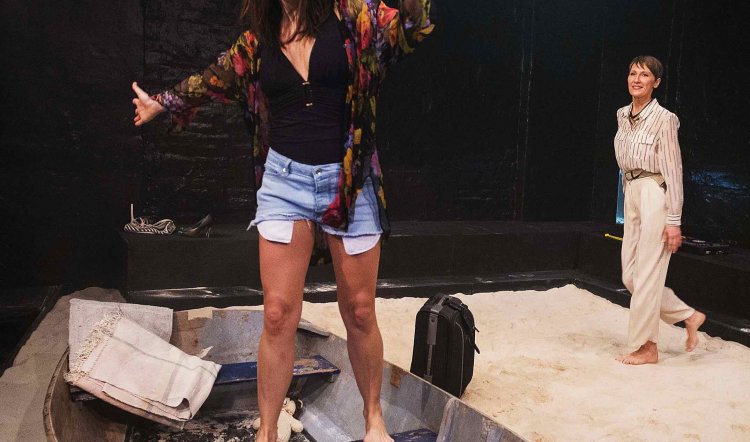 SUNSET STRIP, The Uncertainty Principle and Griffin Independent at the SBW Stables Theatre, 14 June-1 July 2017. Photography by Patrick Boland: above - Emma Jackson and Georgine Symes; below - Lex Marinos and Simon Lyndon; below again: the “beach”

This new, 90-minute play by Suzie Miller begins benignly enough, at a pace guaranteed to lull and draw in the unsuspecting. It’s much like Sunset Strip itself: a dozy nowhere dot on the map whose one appealing feature – a lake around which its houses are set – has long ago dried up, thanks to a heedlessly built dam and drought.

The small town and the play are not what they seem, however, and it’s not long before the pace quickens and the underlying cracks in the lakebed of their lives begin to open up. Successful lawyer Caroline (Georgina Symes) returns home to assist her younger, ratbag sister Phoebe (Emma Jackson) as she gets her kids back from DOCS after a successful stay in drug rehab.

For reasons that include shaking Sunset Strip off her expensive shoes and a recent experience with chemotherapy and a silicone breast, Caroline hasn't been home in a long while. She is shocked to find the lake is now dried up dirt (“sand”, says Phoebe defensively) while their father (Lex Marinos), is in the grip of dementia and drifts in an out of the present with often alarming consequences. 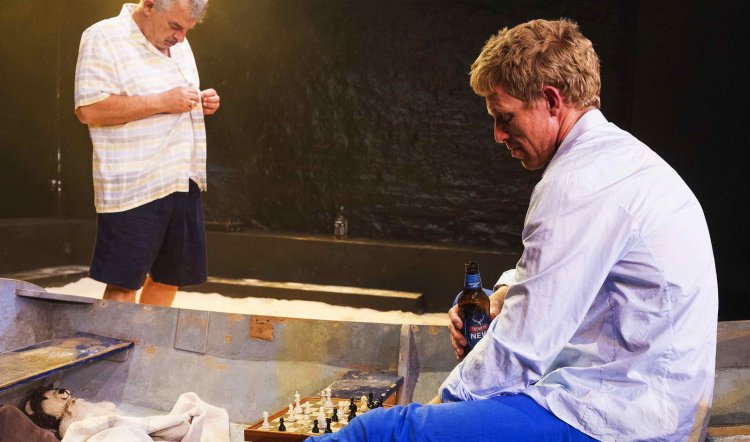 Phoebe has another surprise for Caroline: she’s got a new man and she’s about to marry him. Teddy (Simon Lyndon) plays guitar and has a day job at the servo and to most eyes would easily pass as a deadhead. That’s certainly Caroline’s view and she has more reason than most to disapprove. But Phoebe has been to the op-shop and bought her sister a red dress and a shocking pink fright wig and insists that Caroline will be her bridesmaid.

The relationship between the sisters is exquisitely wrought by Suzie Miller and equally finely calibrated by director Anthony Skuse. The play’s core is played out by the actors as the chalk-and-cheese girls wrangle through memory and ferociously denied love; trying to re-establish themselves to each other and with each other.

Emma Jackson is all crackling energy, rough edges and thin skin as she grapples with a lifelong feeling of second-best to her cleverer, beautiful sister. Georgina Symes is literally the outsider – long gone in all the ways that matter but, as it turns out, desperate to belong and to be the one who, for once, is cared for. The authenticity of the two is palpable and ultimately very moving, for reasons you need to witness for yourself. 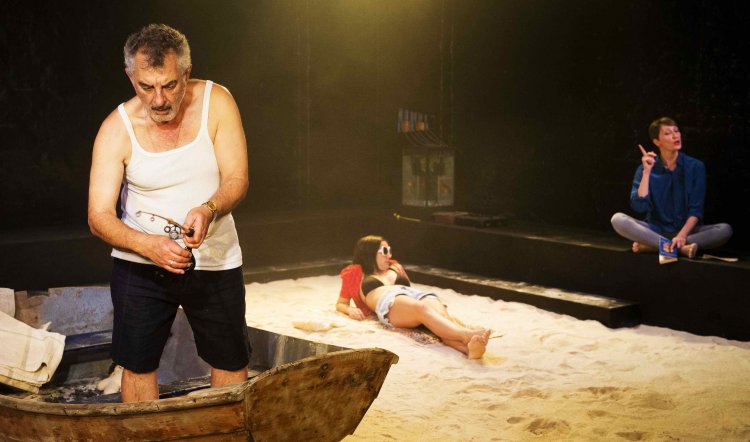 Lex Marinos also gives much in a nuanced and careful study of the physical and inner effects of dementia – mistaking Phoebe for his long-dead wife, being ultra-polite in not recognising Caroline and “going fishing” from his beached dinghy with a magnet in place of a hook and tin fish scattered in the sand. He’s at once an alarmingly overgrown toddler and a sad, sad dad. Simon Lyndon gives generous and plausible support as the boyfriend and his gradual emergence from the shell of no-hopery is persuasive and touching.

Sunset Strip also has its comical side and laughter lifts and leavens the small tragedies we witness around the old dinghy as it mutely faces the lake from the “beach”. Emma Vine’s design is simple and effective and her costumes are even more so; while Verity Hampson’s lighting tells us how sticky hot it is by day and shadowy-hopeful by night.

And then there are the goldfish. In their softly-lit tank they swim, happily unaware of the absence of water and life just beyond the glass. Dad tends them daily and is also teaching them to pull strings to ding the bars of a toy glockenspiel suspended above the tank in return for a snack. It’s not happening and neither are the redemption and new starts longed for by Phoebe and Caroline. Or are they? What is human existence without a glimmer of hope in a fish tank. Recommended.