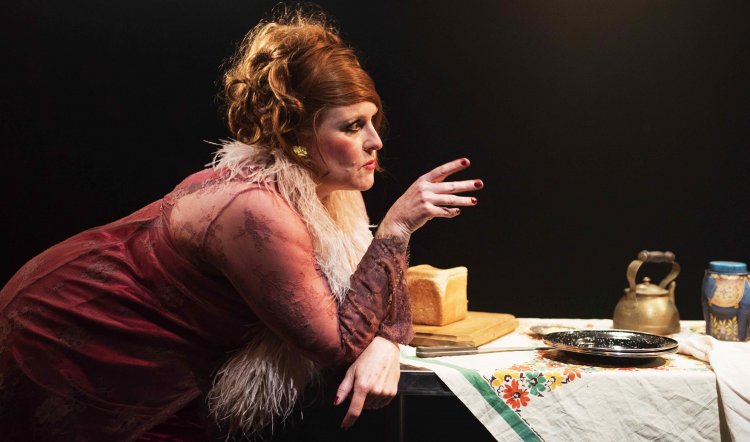 Written in London in 1948, Patrick White said of The Ham Funeral, “It is not a naturalist play.” Inspired by William Dobell’s modernist painting The Dead Landlord and by the ideas and influence of another Australian modernist, Roy de Maistre, naturalism was the last thing on the playwright’s mind.

Unfortunately, culturally dozy Australia had not got past naturalism in theatre even by the early 1960s when the Adelaide Festival rejected the play as “unappetising fare”. The furore was as surreal in parts as the play itself, which was then first performed in the Union Hall Theatre at the University of Adelaide. Since then it has gone on to take a position of great significance in Australian drama.

The Ham Funeral is dense and wildly obtuse and director Kate Gaul has steered a lucid path through it and achieves a bright, light production of what is also a darkly humorous gothic drama. Her first success is in casting Eliza Logan as the landlady Mrs Lusty, and Sebastian Robinson as a tenant, The Young Man.

The Young Man is an amalgam of the two Australians, White and Dobell, and of their lives in London. In his notes for the Adelaide production the playwright wrote,

“I was the only lodger in a house in Ebury Street, where I had lived on going to London as a young man, to which I had returned on and off during the 1930s, and where I experienced the first months of the London blitz, in the basement, and the coal cellar under the pavement. As I sat in my empty room I began to play with Dobell’s anecdote: of how his landlord had died, how the landlady had taken down her hair, announcing there would be a ham funeral, and that he must go to fetch the relatives...” 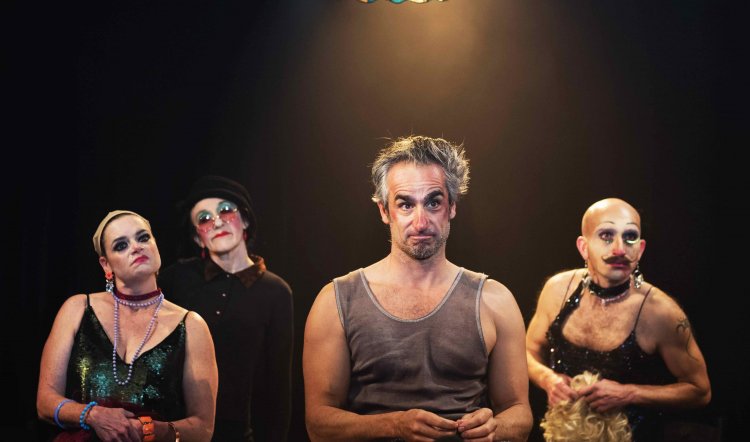 In this iteration, Mr Lusty (Johnny Nasser) sits in the basement kitchen with moustaches and legs akimbo, like a transplanted image of Henry Lawson. His sudden death and the struggles of the Young Man and Mrs Lusty to manoeuvre him into a respectable position and place are at once funny and grotesque, as are the relatives, when they turn up to eat and mourn.

Andy Dexterity, Carmen Lysiak, Jane Phegan and a ghostly Jenny Wu form the burlesque show that is the funeral and its community of bawds and losers. They’re joined by a recast and re-costumed Johnny Nasser and this vivid group colours in young Patrick White’s picture of what is, for him, an unexpected aspect of London life.

Raised in the ingrained snobbery and social expectations of squattocratic Australia, lower class Londoners were by turns fascinating and repellent to the young White and they are portrayed here as characters from music hall – audience or performers, as you will – but unnerving and not quite nice nonetheless.

With death comes seduction and unholy needs so, at the same time, Mrs Lusty is a creation straight out of the worst nightmares of the still uncertain gay man. She is captivating and horrific in her all sumptuous feminine glory and in Eliza Logan we have a three-dimensional human being, albeit a comical monster. 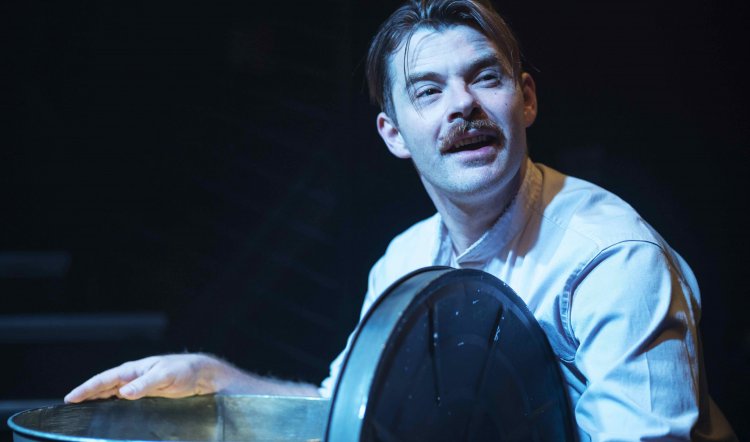 With this in view – on an effective, sparsely-clad set by Jasmine Christie with lighting by Hartley TA Kemp reminding us we’re in a windowless basement a wall away from the coal hole – it’s interesting to think about where the young playwright’s ideas were taking him. The character of the Young Man being the artist-figure May-Britt Akerholt described as a “visionary whose art is realised through communion with the world around him,” in her 1988 publication Patrick White.

That world is vividly portrayed in this production, not least through a remarkable soundscape by Nate Edmondson that is integral to the action. You could swear the smells of coal, rancid dripping and cheap perfume hang in the air of the Stables theatre along with the sweaty ghosts of characters past. It’s captivating and wonderfully weird, and as the Young Man says to us, in the manner of a properly stern modernist,

“Probably quite a number of you are wondering by now whether this is your kind of play. I’m sorry to have to announce the management won’t refund your money. You must simply sit it out, and see whether you can’t recognise some of the forms that will squirm before you in this mad, muddy mess of eels.”

As it happens, the mad, muddy mess of eels is as squirmy and conspicuous today as it was in 1948 and although of its time, The Ham Funeral is also timeless in its observation and understanding of human foibles. This is a glorious production – Recommended.