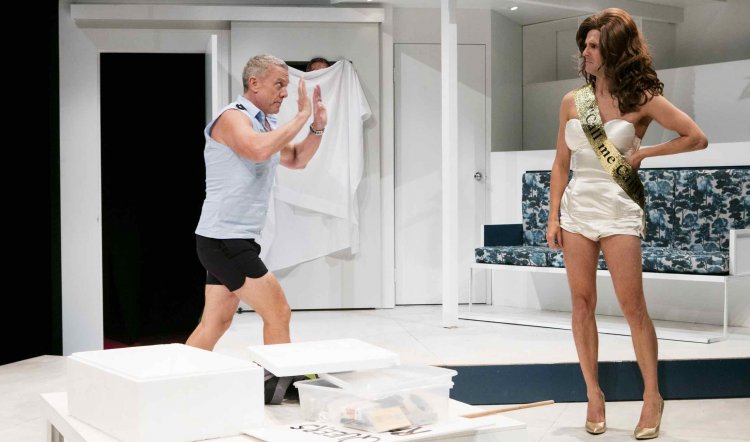 THE HOMOSEXUALS or FAGGOTS

The synonym of farce, as per Merriam-Webster, is caricature, cartoon, mockery, joke, parody, sham, travesty, and indeed has its origins in cookery: “stuffing”. In Declan Greene’s new work The Homosexuals or Faggots he has all those ingredients. Greene is a writer of depth even in farce. He makes an audience sit up and listen and creates theatre that provokes. His work is almost always good. In this piece he takes political incorrectness to new heights through the use of mistaken identity, door slamming, queenie rhetoric, a dress-up box, upward inflections and dialogue that is cutting.

In the setting of the scene the audience was ready to boogie as we met a newly married couple, Warren (Simon Burke) and Kim (Simon Corfield) regaling their outrage that the local eatery had Faggots on the menu – how offensive – they wanted the fat dyke in charge to either take it off or replace it with “meatballs”. Get the picture. They were as offensive in the retelling of the story as they were affronted.

It’s Darlinghurst, Sydney and it’s Mardi Gras, Warren is going to an “offensive” dress-up party with his long time trans friend Diana (Genevieve Lemon). Prior to the party he has a model, Lucacz, (Lincoln Younes), coming over for a “photo shoot”, something he’s told his partner he’s not doing any more; and this is where the door slamming begins. Kim comes home early in a state of despair from a lecture in Queer Studies having been called a transphobe by the guest lecturer Bae Bae (Mama Alto). Unknown to Kim, Warren has invited Bae Bae over for an interview.

Cue hide the model/stud who Warren has dressed as a cop. Then enter Diana who has come dressed for the “offensive” party as Bill Cosby – which won’t do if Bae Bae is on her way. Then we get the full comedic timing of Lemon as she sits and glues the sole of her shoe; then has to remove her Cosby mask lest it offends and of course glue sticks to the mask, her hands and everything else...

There is a lot of running in and out of the bathroom on the pretext of a glimpse of the parade and to change costumes. There is also hiding in cupboards, more dressing up and then: enter mistaken identity Pam who is a junkie systematically stealing from the apartment block. She sees the cop and thinks the game’s up and they all think she is Bae Bae.

The dialogue is as precise as a door slamming. You should be offended but suddenly find, in spite of yourself, you’re laughing out loud at moments that should make you cringe – Kim in full niqab meeting a terrorist, for one. There is missing cocaine, which the stud comes back for but ends up dressing as a handy man… 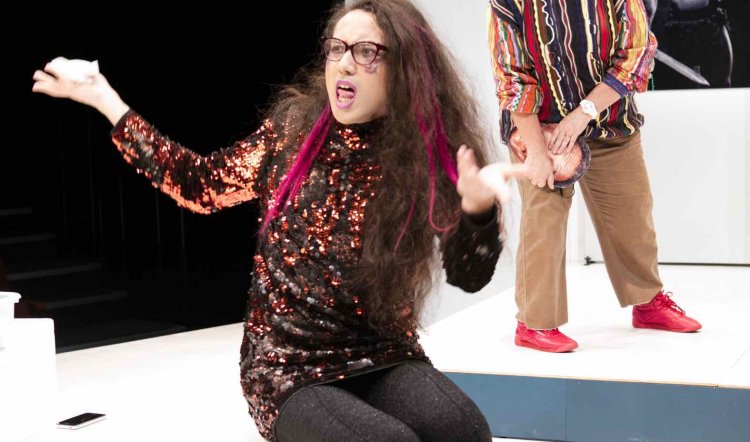 Junkie Pam is also a cook, who had lost her job because of two snotty nosed queens who objected to Faggots on the menu. She is enlisted to cook a meal, and then – don’t ask – is locked in the cupboard. There’s the fire in the kitchen which sees the stud ending up in blackface.

Bae Bae arrives back at the scene, and they think she is Pam and offends her even more. The only person who knows who’s who in the zoo is Diana.

It is hysterically funny: you laugh at how political correctness can go too far and how high are the high horses we get on. It brings you down a peg or two.

In the end we see how fractured Warren and Kim really are, and it’s exposed even more when Diana, even after everything that has occurred, still wants to go the party and wants Warren to go with her. She lambasts him with their past, their history and how dare he not follow through.

Burke is terrific in this scene (as is Lemon) you see him listening, and you get the distinct feeling that just because they were tight in the past and continue with the queenie banter day-to-day – it’s now just habit; and that doesn’t serve any more. Life has moved on.

This final scene after the hysterics is true farce – the lesson. 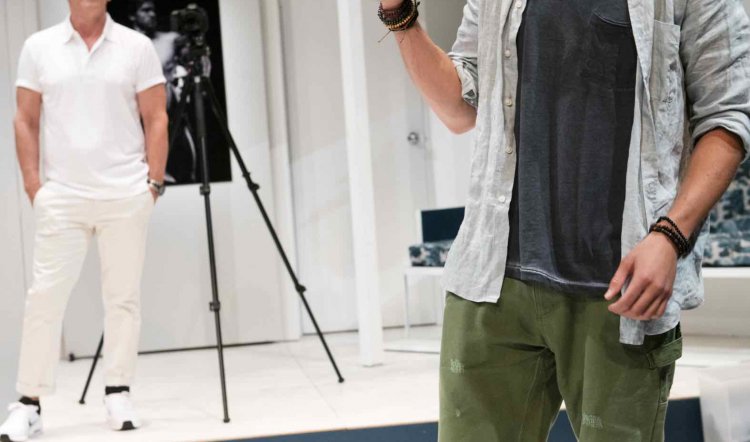 Corfield as the simpering partner who has a moment of thinking he is trans is terrific. Burke leads the way and his last scene is brilliant. Lemon likewise – she can have you falling off your seat and holding your breath at the same time. Mama Alta relishes the two roles and Lincoln Younes is suitably dumb with a six-pack to die for.

Designer Marg Horwell gives the actors a small space to work in, which suits the mayhem and she has a field day with costumes.

Director Lee Lewis has a lot to contend with – this sort of work is hard – but it’s her forte and she has a cast that has responded well to her; she gets the comedic as well as the pathos.

The Homosexuals or Faggots is a new work and will take time to settle but it is written well and is served by actors and a director who will make ensure it does. Some may be offended, I wasn’t. Recommended.