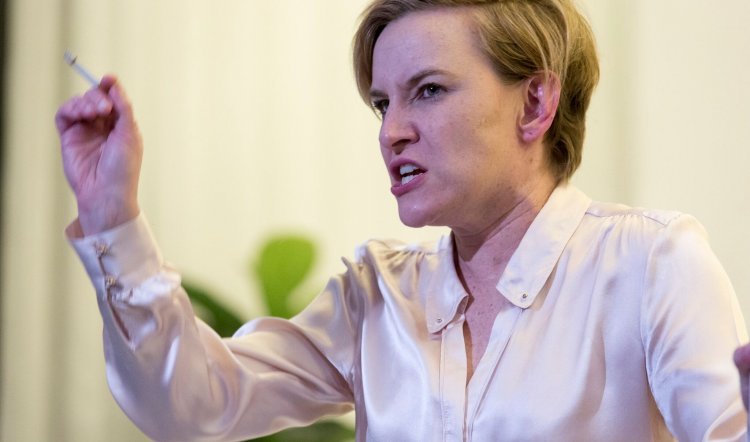 AN ENEMY OF THE PEOPLE

Melissa Reeves’ new version of Henrik Ibsen’s An Enemy of the People has brought the 1882 play zinging into the present with a ritzy wellness spa in place of small town health baths. Dr Thomas Stockman becomes Dr Katherine Stockman and she has one daughter instead of two sons, while the town’s tannery is now a sawmill. Although Norwegian names have been retained, the setting is Australian with small-minded political corruption, ambition and greed as the driving force.

The driving force is Kate Mulvany as Dr Stockman. After a somewhat desultory opening scene, when she finally appears it’s obvious why. Dr Stockman has returned to her home town after the death of her husband and is the spa’s Wellness Consultant. She is a respected member of the community. Her daughter Petra (Nikita Waldron) works at the local school, her elder brother Peter (Leon Ford) is the mayor, her father-in-law Morten (Peter Carroll) owns the sawmill. She is good mates with Hovstad, editor of The Sentinel (Steve Le Marquand) and his sidekick Hilling (Charles Wu). Small business honcho Aslaksen (Kenneth Moraleda) thinks she’s Christmas. Tourism is booming, thanks to the spa.

Dr Stockman suspects that ailments suddenly afflicting visitors to the spa are caused by the “healing” waters. She has it tested and, sure enough, it’s contaminated with toxic heavy metals. She’s also discovered the toxins originate from her father-in-law’s sawmill. She alerts Hovstad and Aslaksen: the public must be warned!

There are a few peculiar distractions in this production and one of them is: how can a sawmill pollute groundwater with heavy metals? Sawmill pollutants are airborne – toxic gasses such as sulphur dioxide, carbon monoxide, nitrogen dioxide. 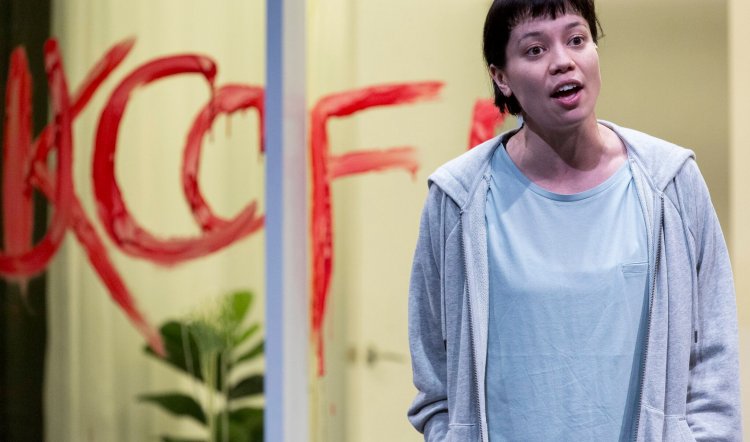 A second distraction (meaning one’s attention wanders to it and possible solutions instead of on the stage action) is the opening scene’s prawn barbie. Dr Stockman has purchased three kilos, she says, as a celebration of good times. They’re on the Weber, and every time someone suggests they might be done, or it’s time to eat, the answer is – no, not yet.

High anxiety: these prawns would be cinders in the time it takes the scene to play out. Solution: lamb cutlets. For starters they’re a festive $50+ while prawns are a mere $30-ish and they take longer to cook and an audient wouldn’t be worrying...

The third distraction is the set: a bare stage with a glass box representing part of the house rented by Dr Stockman from her brother. In the box, behind sliding doors, is a Scandinavian sofa of which the doc is very proud. Attached to each actor’s head is a mic and on their backs, a radio pack.

When they’re behind glass they sound as if they’re talking into a tin bucket. When they’re not in the box, they sound like a mob of excellent actors doing their thing. It’s beyond distracting. It’s ridiculous and pointless. 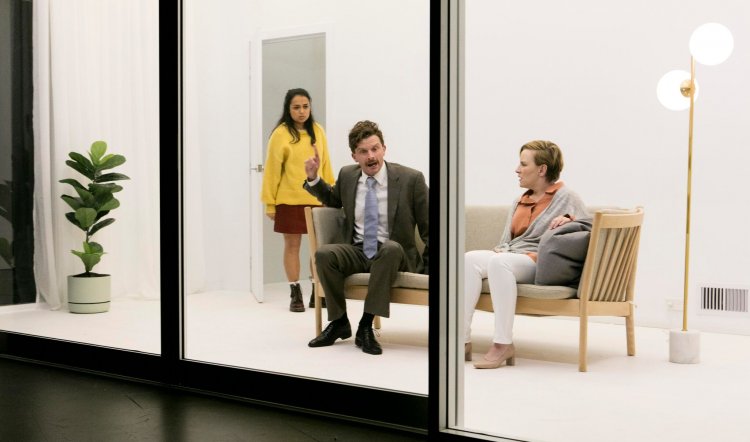 That aside, the first half is intermittently funny, rather repetitive and surprisingly dull as the subtexts, side issues and personality clashes are painstakingly laid out. Those who left at the interval, however, missed out on the extraordinary firework display of the second half.

As Dr Stockman struggles to get the townsfolk (the audience) to listen, she is virtually set upon by a pack of wolves: her former supporters and friends and, disconcertingly, all men. The town meeting is a tour de force of performance and direction (Anne Louise Sarks) as the action is choreographed throughout the auditorium. On opening night some yelled encouragement and clapped! It’s sickening and exhilarating in the face of a week in Sydney where the powerful have been openly opposed to the people and everything has been done to thwart honesty, the law and truth.

Carrying the weight of the play, Kate Mulvany is electrifying, her performance subtle, and utterly convincing. In support, Steve Le Marquand, Kenneth Moraleda, Peter Carroll, Leon Ford and Charles Wu are all persuasive. A character new to the play (and its best addition) is the doctor’s cleaning lady Randine (Catherine Davies). She represents the working class and is an observer and outsider; attention strays to her constantly. As Petra, Nikita Waldron needs time to settle in this exalted company, growing in confidence through the performance.

Although its origins are in 1882, the play is vividly 2018 and Sydney’s ghastly social-political morass. Recommended with (first half) reservations.