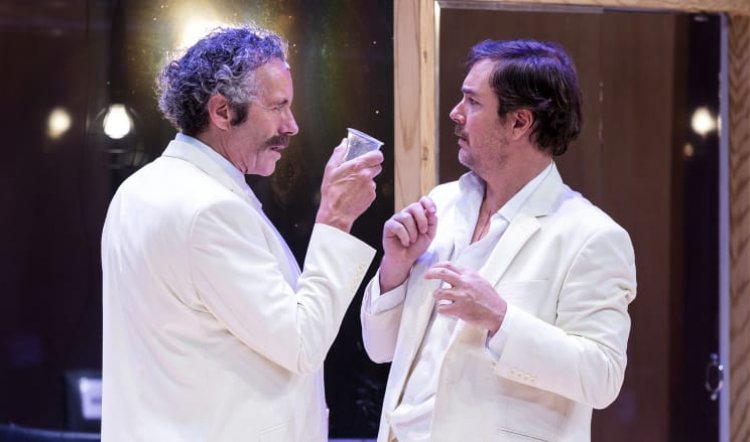 When faced with three hours in the theatre I took comfort in the creative collaboration of director Matthew Lutton and writer Tom Wright (Picnic at Hanging Rock, The Real and Imagined History of the Elephant Man). This time it’s the adaptation of Peter Carey’s novel Bliss about an advertising man recovering from a heart attack, but believing he died and is in hell.

It’s a dense novel so it was always going to be a hard task to pare it down to keep an audience interested. In this production, there is a feeling of too much reverence to Carey, almost not quite sure how to shave a bit off the top. The end result is that it is too long.

Harry Joy (Toby Truslove) is a good bloke, family man, loves the good life and is a white-suited leader in a small town in the ’80s, then he has his heart attack. When he wakes up after being unconscious for nine minutes he knows there is no return, he’s been at the crossroads and he believes he is now in hell; a punishment for not listening. His antics of taping everything his family and his work colleagues say to prove his point shows him as man who is on the edge, a man who needs clinical help – “what would they know they are all actors” – his world is the truth. 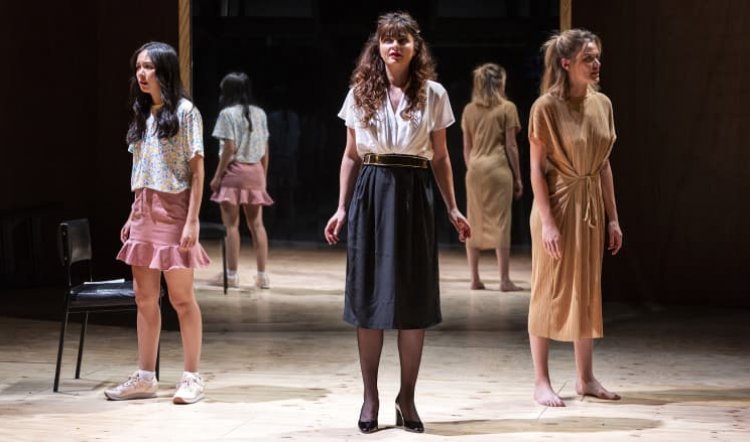 His wife, Bettina (Amber McMahon) sees it as her time to get to the top in her own right. The two children, David and Lucy, (Will McDonald and Charlotte Nicdao) are completely out of control – a chip off the old block perhaps; his colleague from the ad world (Marco Chiappi), secretly hates how they make their money, is seemingly rudderless without Harry and is losing control.

The actors hit the stage with gusto, all vocally strong and with great presence. I couldn’t fault the performances. There was a great sense of respect. Susan Prior has many roles and is a stand-out, especially as Mrs Dalton, the doyenne of mental health but suitably duped by the two Harry Joys. As Aldo the Italian waiter, I was mesmerised by her.

Chiappi steals his moments brilliantly as Billy McPhee, Bettina’s embarrassing father and as Alex Duval from the ad agency, and the pretend Harry Joy. Anna Samson as Honey Barbara the “in the moment” hippie who steals Joy’s heart when moonlighting as a hooker, never strays from being in that moment, which was tricky as she has to keep us interested with a number of monologues. Making up the ensemble is Nicdao making her stage debut and she is perfect. As her brother, McDonald holds his own and Mark Coles Smith as Bettina’s American lover is suitably hapless. 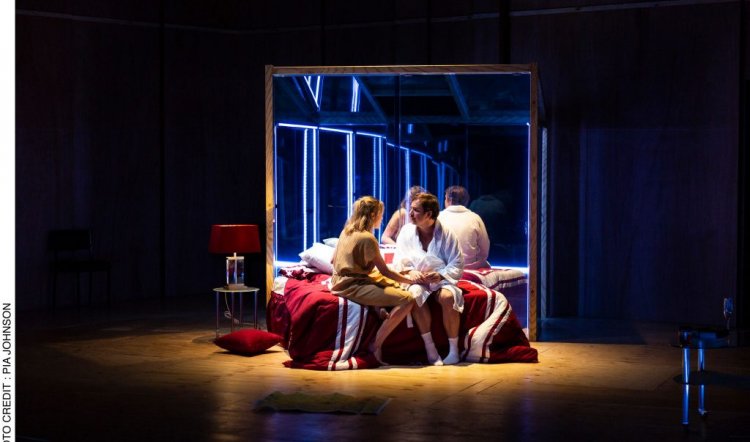 There is a lot to get through in this play with Harry Joy trying to work out whose side people are on, with more hell-raising to epiphanies and his search for the meaning of it all then ending up in the bosom of a commune. The parallel to Joy’s life is Bettina wanting to make it big but the hurdles, not her talent, get in the way. Truslove is commanding as the story-teller and the crumpled, bemused fallen highflyer.

The set (Marg Horwell) is all polished boards, set on a revolve with a glass box which helps with entrances and exits. The costumes have that ’80s feel in a modern set and modern interpretation, with gender swaps. We get another feel of the ’80s with a few advertising jingles thrown into the sound design (Stefan Gregory) that some will find amusing.

Even though it could do with a bit of trim to tighten it, I loved it, because the actors are committed and strong which is in part a tribute to their craft and that of the director. It won’t be for everyone, but go and see it and make up your own mind. Recommended.