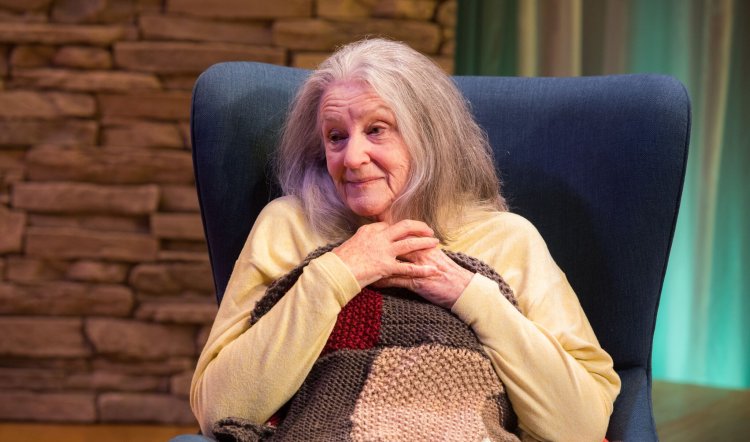 Jordan Harrison’s Marjorie Prime opened in New York in 2015, was a Pulitzer Prize finalist and was adapted for the cinema in 2017. Both versions were praised for their thoughtful comedy, elegance and unexpectedly unsettling nature. In 2018, Mitchell Butel directs the play for the Ensemble and all the same can be said of the production.

Marjorie Prime is set in a mid-21st century future where technology and artificial intelligence have gone a long way beyond Siri’s patronising tones and cats riding on Roombas. It opens with 85-year-old Marjorie (Maggie Dence) reminiscing with her husband Walter (Jake Speer). That he is obviously younger by decades than Marjorie is a clue that not all is as it may seem, and when he recalls a significant movie in their shared past as My Best Friend’s Wedding rather than Casablanca, their comfortable conversation suddenly seem rather off. (Think The Stepford Wives – the 1975 version – for normalcy gone inexplicably awry.)

We gradually learn that in the grand tradition of “what can possibly go wrong?” (when science and technology are divorced from common sense) it has become possible, through a corporation called Senior Serenity, not only to recreate a deceased loved one as a hologram – a Prime – but also to choose the age and stage of the returnee. And as the disparity in age between Walter and Marjorie is because she is in the early stages of Alzheimer’s and therefore living with her older memories, the ironies and incongruities are suddenly boundless.

For Marjorie’s daughter Tess (Lucy Bell) and Tess’s husband Jon (Richard Sydenham) the dichotomy is intensified when, after some fluidly rendered back-and-forth between reality, memory and some years, Marjorie is also revealed as a Prime. Tess is more than uneasy about the development but Jon reasons with her: “How much does she have to forget before she’s not your mum any more?” 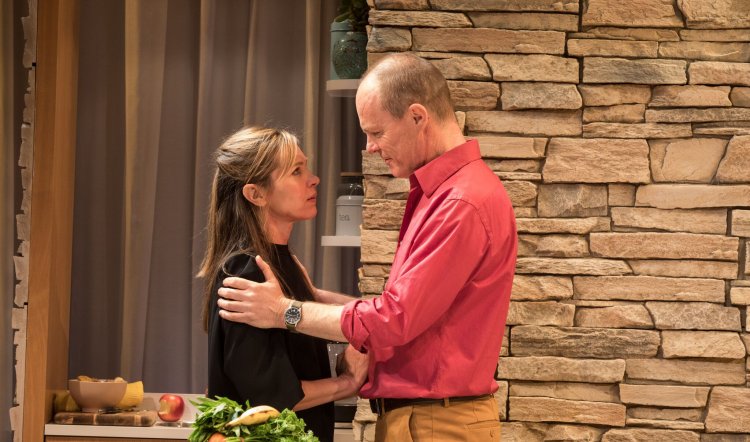 And that’s more or less the crux of this clever, tender, strange play. Just as any computer, or person, is only as capable as the sum of the information or life experience fed into it or them, so is the reality of memory and its flaws. In everyday life – never mind a life corroded by cognitive illness – we routinely craft, re-invent and embellish our truths and stories; love and loved ones are also caught up in this web of invention. In his program notes, Mitchell Butel presents a quote from Iris Murdoch: “Love is the extremely difficult realisation that something other than oneself is real.”

Where this thought leads in the play's 80 minutes is further confounded by the younger Walter. While pleasantly charming, he is also a somewhat stitched-up prig whose glossy hair and neat clothes suggest more dissonance than the misremembered experiences he shares with Marjorie. With further tension emanating from the puzzled and uncertain Tess and Jon, Marjorie Prime moves easily from deceptively light comedy to a deeper examination of what human relationships mean, or not.

Although at least two of the inhabitants of this tastefully ordinary suburban world are holograms, the simple, effective design by Simon Greer – suggesting rather than filling the space and completed by Alexander Berlage’s lighting – grounds a futuristic idea in the all too plausible here and now. Sound designer Thomas Moore and composer Max Lyandvert also contribute to an essential earthing of the piece with work that complements the text and resists even a hint of Radiophonic Workshop.

The actors too are anchored in warm-blooded, three-dimensional humanity: as the tightly wound, somewhat OCD Tess, struggling for control over the uncontrollable and unthinkable, Lucy Bell is deeply felt and measured by turn. Jon’s gentle connection with his wife, coupled with palpably growing frustration, are slowly unwrapped in Richard Sydenham’s intelligent performance. Jake Speer is a dispassionate, still presence as the youthful but long since departed Walter and somehow conveys how a human hologram might actually look. 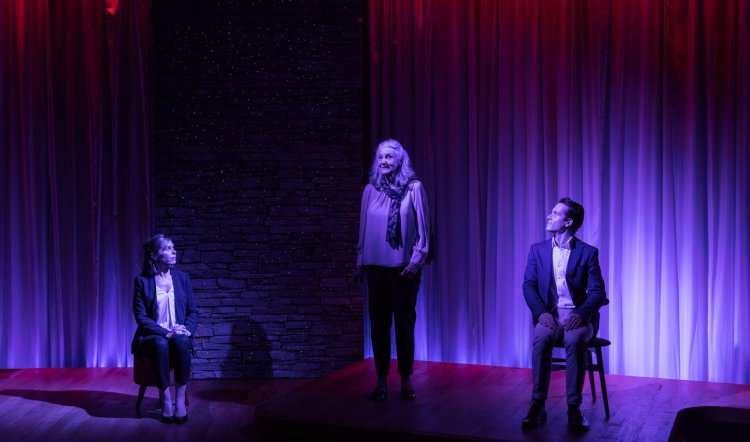 Walter’s believability is also given vital weight by Maggie Dence’s Marjorie. She inhabits both past and present and somewhere beyond without apparent effort or artifice. The layers of this woman, her life, loves and memories are meticulously realised in a range of responses from wry humour through flirtation and into bewilderment as her mind and recollections begin to blur.

In the end Marjorie Prime is a vote for humanity and the power of love and laughter, with enough grit and pain to keep us in the now, rather than a fraught and discomfiting future. Recommended.