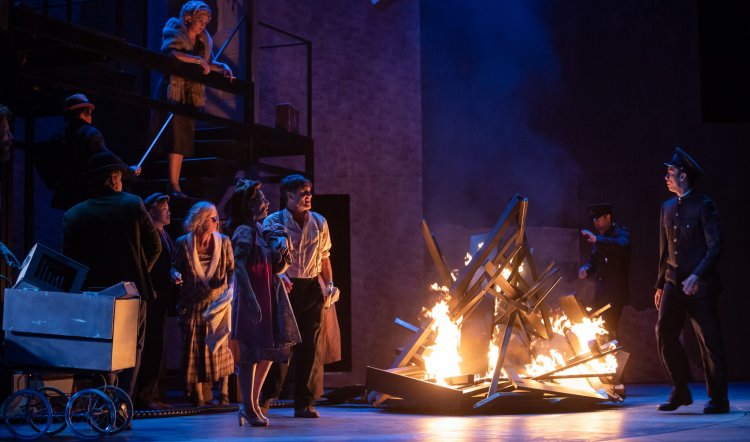 THE HARP IN THE SOUTH PARTS ONE AND TWO

Brilliant, memorable, epic, intimate, hilarious, tragic, unsentimental, humane, loving, vicious, tender, sickening, romantic, inspiring, redemptive...The Harp in the South in its nine hours (including intervals and dinner break) of Part One and Part Two is all of this and more. In essence it’s the theatre event of the year and – like Nicholas Nickleby and Cloudstreet before it – will remain in hearts and minds for decades to come.

Marvellously distilled by Kate Mulvany from Ruth Park’s trilogy of classic novels, the plays divide into discrete works, labelled Part One and Part Two. They can be seen – and be dramatically satisfying – on two evenings, but a single day and both are highly recommended. It’s a surprise as each segment draws to a close.

Park’s story is centred around the Irish in Australia and Surry Hills in particular. Not the smart inner-city suburb of today but the filthy higgledy-piggledy of the early 20th century. A naive young couple – the Darcys – arrives for a better life from godforsaken Trafalgar, NSW. They move into a terrace on Plymouth Street and the neighbourhood draws them in.

Tragedy strikes early and continues to resonate through the years in small but monumental ways. However, it doesn’t stop the simple pleasure in life that’s partly about Irish culture – song, dance and ribald disdain for the everyday vicissitudes – and partly about the hope of the new Australian outlook.

The plays take the Darcys, Margaret and Hugh, from youthful ardour and energy down an almost imperceptible slope to middle aged despair. In these roles Anita Hegh and Jack Finsterer are as prettily optimistic as a bunch of daffodils. Yet so subtly calibrated are their performances, it’s shocking to realise where they are as Hegh finally sees the reality of her existence and what she’s become. Both are fine and she is magnificent. 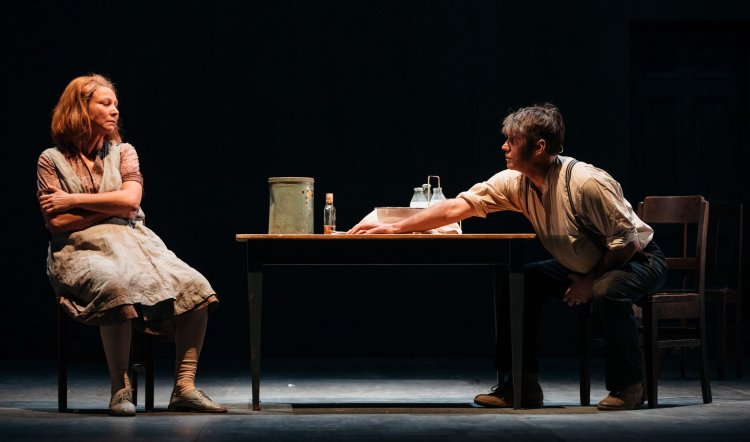 Around them – across three generations – are other family members and neighbours. First among equals is Margaret’s mother Eny Kilker, an indomitably dreadful ratbag. Her droopy lisle stockings personify Heather Mitchell’s willingness to do anything in the service of a character, and Eny is definitely a character; Mitchell too is magnificent.

Channelling the look of Tilly Devine along with the rolling gait of a successful light-heavyweight boxer, Helen Thomson is rib-cracking funny and frightening as local madam, Delie Stock. Never without her mink stole, a couple of her girls, and wads of strategically-stored cash, Delie is a vivid figure as she surveys the locale from her balcony and strolls the streets, but also is omnipresent in other important ways. Again, and as usual, Thomson is magnificent.

The Darcy daughters, Dolour and Roie, represent all that is good and bad for girls growing up in the 1940s. Dolour, the preternaturally smart one, yearns for education and independence; her elder sister Roie dreams of love and a family. Both are largely thwarted by society and their position in it as females. As the precocious Dolour, Contessa Treffone is vibrant and huffily funny when not being impossible and bug-bitten. On a different trajectory, Rose Riley is a soaring, tender presence as Roie.

Upstairs in the Darcy house is a succession of lodgers. Notable among them is Miss Sheily who, despite the honorific, has a disabled son, Johnny. These two epitomise the sad reality and moral extremes of the 1940s. Miss Sheily is as upright as a telegraph pole and as unyielding. As such she is odious and tragic and Tara Morice is pitiful in all that rigidity. It is impossible not to feel for this sad, sad woman, even while laughing at her gorgeous comic moments. As the ruined Johnny – as well as a series of other social misfits – Rahel Romahn is also fearlessly funny and ghastly.

At the other end of the spectrum is Guy Simon first as Hugh Darcy’s younger brother Jer, a boy left behind in Trafalgar on his crutch and crippled ankles. His belief that he was born with twisted limbs because he was a bad lot symbolises the lousy medicine and prevalence of superstition of that era. Later, Simon’s most substantial role is as Roie’s black beau then husband, Charlie Rothe. 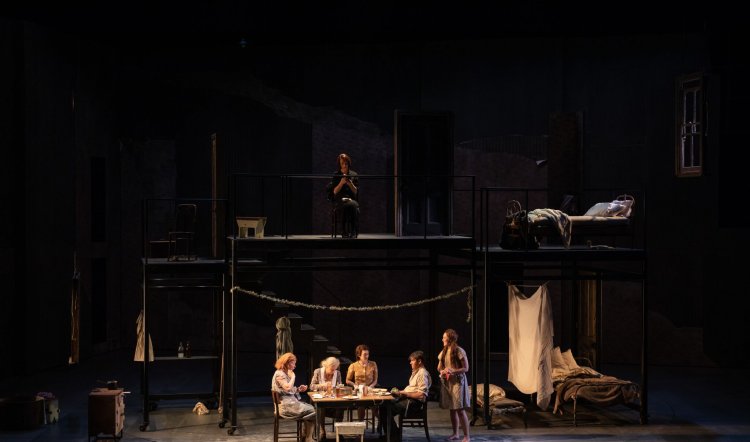 If the Irish were despised, they in turn happily looked down on Aboriginal Australians. It’s an illuminating thread running through Roie and Charlie’s lives, and racism is as familiar as the sexism which faces Dolour. Guy Simon’s is yet another resonant performance in this astonishing company of actors which also includes, all in multiple roles and beautifully performed, Luke Carroll, Tony Cogin, Benedict Hardie, Emma Harvie, Ben O’Toole, Lucia Mastrantone,  Bruce Spence and George Zhao; and alternating as young Thady Darcy, Joel Bishop and Jack Ruwald.

The production itself is a visual feast. Part One is all two-storey structures, moved by cast and crew to form varying aspects of the Darcy house, the street, the pubs and Delie’s whore house. Sparse geometric forms and equally sparse but naturalistic furnishings (including a cranky wood stove with a life of its own) fill the stage with diverse points of view and focus. One minute grim and forbidding, the next, ablaze with colour and gaiety, Part One is a dynamic contrast to the bleak, abstract of Part Two which is characterised by emptiness. Both represent breathtaking work by set designer David Fleischer and lighting designer Nick Schlieper.

Complementing the stage are Renée Mulder’s costumes: delivering time, place, social standing and character with thrilling intelligence. The same can be said for the music, by The Sweats, and sound design by Nate Edmondson. From Irish shanties and folk tunes through fragments of period songs and street sounds – including the wrecking ball as old Surry Hills is destroyed – the aural component of the plays is as ravishing as the rest.

And all of it is brought together in his most ambitious and best work to date by director Kip Williams. The star system is a reductive pain in the arse. I’m giving Harp In The South all five; it deserves more.